After stopping to assist, she was exposed to the animals' feces while helping to clear crates from the roadway 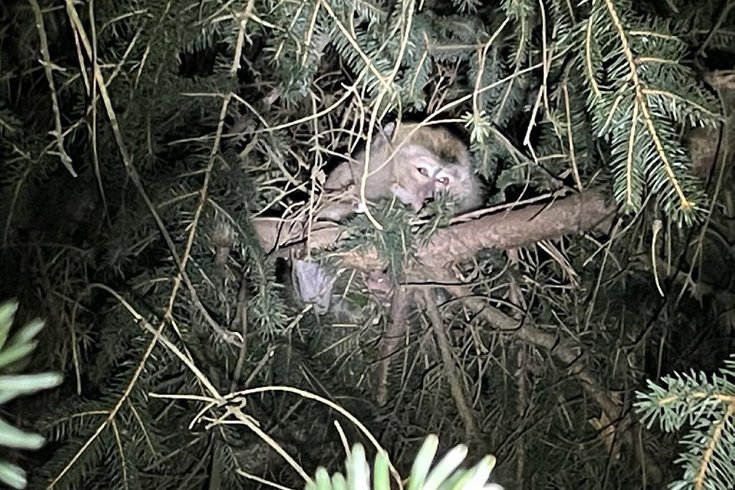 Multiple long-tailed macaque monkeys escaped from a truck that crashed on Friday in Danville, Pennsylvania. The animal pictured above was among three that were euthanized. One woman who offered help at the scene became ill after her exposure to the monkeys, which were imported to the U.S. for scientific research.

A woman who offered assistance at the scene of a truck crash involving captive lab monkeys in rural Pennsylvania says she has fallen ill after being exposed to the animals' feces and saliva.

The wild incident unfolded Friday afternoon in Danville, where a truck carrying 100 monkeys collided with a dump truck, spilling the animals onto Route 54 near I-80 in Montour County. Four monkeys escaped from their crates. One was corralled at the scene. The three others became the subjects of a lengthy search by Pennsylvania State Police and the Pennsylvania Game Commission, which located and euthanized the animals Saturday.

Danville resident Michele Fallon was driving directly behind the truck that crashed and observed the monkey crates tumble from the trailer. In a Facebook post, Fallon said she initially was told there were cats inside the crates and offered to help with the cleanup – only to discover she was surrounded by monkeys.

"I thought I was just doing the right thing by helping," Fallon said in an interview Monday with WBRE. "I had no idea it would turn out this way."

After touching and handling the monkey crates, Fallon said she later developed a cough, runny nose and a pink eye-like reaction in one of her eyes. She explained that she'd had a prior open cut on her hand and became worried about her health.

One of the long-tailed macaques "hissed" at her from inside a crate that fell onto the roadway, she said.

"I was close to the monkeys. I touched the crates. I walked through their feces. I was very close," Fallon said. "I was inside the trailer where the monkey crates were, so I called to inquire, you know, was I safe?"

When Fallon initially got out of her car to help, she said she was not warned by the truck driver that she shouldn't approach the crates or interact with the animals.

"If he would have told me that, then I would have been more careful," Fallon said.

She was later interviewed at the scene by state police and workers from the U.S. Centers for Disease Control and Prevention. They urged her to take precautions since the monkeys had not been quarantined and monitored.

Fallon went to Geisinger Medical Center in Danville, where she received her first dose of a rabies vaccine and was prescribed anti-viral medication for two weeks.

The shipment of cynomolgus monkeys, commonly known as crab-eating or long-tailed macaques, arrived in the United States via John F. Kennedy International Airport from the island nation of Mauritius in the Indian Ocean. They were destined for an unnamed, CDC-approved quarantine facility.

The monkeys are considered highly valuable for experimental research, each worth as much as $10,000. Demand for them has increased during the coronavirus pandemic to aid in vaccine development, prompting some scientists to argue that the U.S. should keep a strategic reserve similar to the U.S. government's grain and oil stockpiles.

During the search for the three escaped monkeys, state police had warned the public not to assist in looking for the animals or come into contact with them. The CDC provided technical assistance to state police in managing the response to the incident.

Fallon received a letter from the CDC, obtained by The Daily Mail, urging her to "seek immediate medical attention" if she had any contact with a loose monkey.

"Nonhuman primates and humans are naturally susceptible to many of the same diseases," the CDC explained in its letter.

One of the diseases spread by long-tailed macaques is the herpes B virus, which can be transmitted through saliva, feces or urine. Infections, though extremely rare, can lead to the development of blisters and potentially life-threatening complications if left untreated, according to the CDC.

"Because the monkey did hiss at me, and because there was monkey feces around, and I do have an open cut, they just want to be precautious," Fallon said of the treatment she's received.

Others who may have been exposed or in close contact with the monkeys also are advised to seek medical attention.

The CDC wrote in its letter that the surviving monkeys will be quarantined and monitored for infectious diseases for at least 31 days before their release.

Animal rights group PETA has been sharply critical of how the incident was handled, including the exposure risk to humans and the decision to euthanize the escaped monkeys without providing an explanation. The organization filed a complaint with the U.S. Department of Agriculture, which confirmed it has opened an investigation into the incident.

"Feces and urine from the terrified monkeys were reportedly smeared across the highway as crates — that weren’t strapped in as required —flew from the truck, and the Centers for Disease Control and Prevention should be scrambling to ensure that numerous people who were at the scene aren’t in danger," PETA wrote. "The monkeys, some likely injured and all surely terrified, remained on the highway in subfreezing temperatures for hours without any protection or veterinary care as onlookers peered into the crates."

The organization condemned what it called "minimal oversight" in the importation of monkeys for experimental research and demanded an end to their use for experiments.