The project is being designed at 20th Street, Penrose, Moyamensing and Packer Avenues 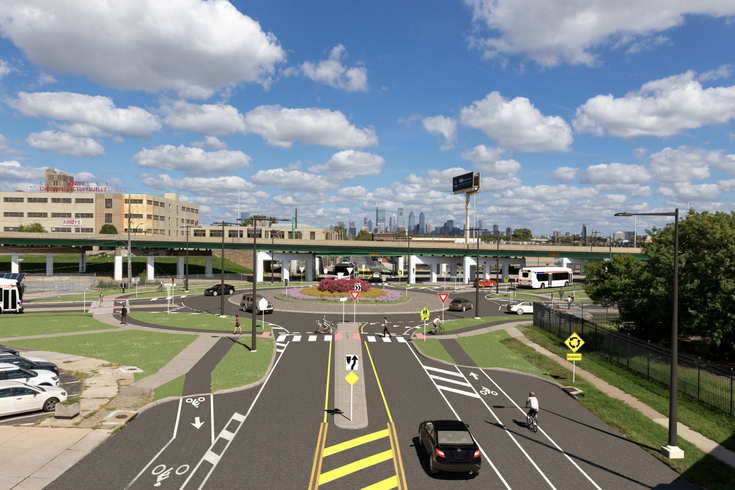 The rendering above shows a traffic roundabout planned at the busy South Philadelphia intersection of 20th Street, Penrose, Moyamensing and Packer Avenues. Construction on the project is expected to begin this summer.

As Philadelphia looks for ways to reduce traffic accidents in high-risk areas, the city is readying plans for a new roundabout project at a busy South Philadelphia intersection.

Streets Department officials confirmed Friday that construction is expected to begin later this year on a roundabout traffic pattern at the intersection where 20th Street, Penrose, Moyamensing and Packer Avenues meet near the Penrose Diner and the Schuylkill Expressway.

Currently in the design phase, city officials say the project at the complex South Philly intersection will improve safety for drivers, pedestrians and cyclists.

A study of the area was conducted by a team of engineers in conjunction with the Streets Department, which determined that the intersection met several factors that make it ideal for a roundabout project. At the time the project was selected, the intersection was listed on Philadelphia's High Injury Network, an accident tracking database that forms part of the city's Vision Zero plan.

PennDOT also conducts annual research showing the effectiveness of roundabouts in limiting crashes at intersections compared to locations with traffic signals. It's part of a growing push in Pennsylvania to build more roundabouts in areas that have anticipated safety benefits and present opportunities for upgrades to other landscape features.

In a study last year of 26 roundabouts located on state roads and at intersections that were previously stop- or signal-controlled, PennDOT found that fatalities were reduced to zero and suspected serious injuries fell by 81%. Total crashes declined 22% at these roundabout locations.

One of the safety advantages of roundabouts is that they are designed to reduce speeds to around 25 mph or less and they convert all turns into right-hand turns. This cuts the risk of high-speed T-bone collisions that tend to occur at traditional intersections, especially those with left-turn movements.

In Philadelphia, the city's Modern Roundabout Program aims to replace geometrically complex intersections with roundabouts. The program relies partly on crash data to help select locations where intervention is most needed, but also considers the circumstances of the area as a whole. 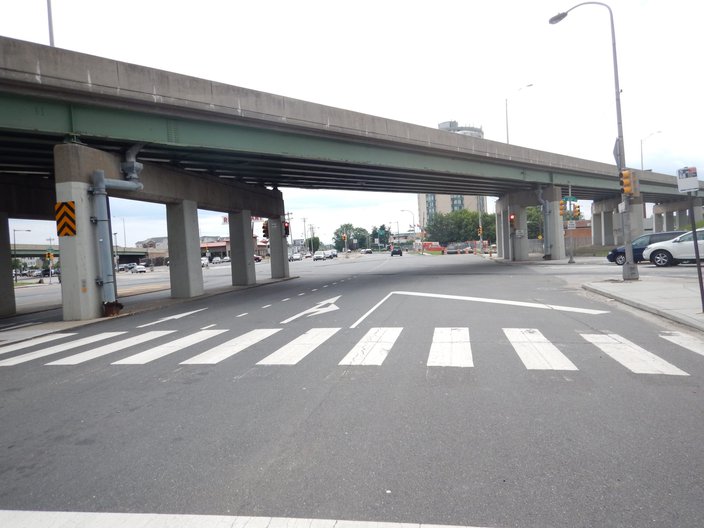 A current look at the South Philly intersection where the Streets Department will begin work on a traffic roundabout later this year.

"Other factors we consider include traffic volumes and demand, speed, intersection complexity, number of potential points of conflict, sight lines, proximity to pedestrian generators — including public transit — and community feedback," said Gus Scheerbaum, director of strategic initiatives for the Streets Department. "Not only do roundabouts yield significant reductions in reportable crashes, they also reduce noise and air pollution, and provide neighborhood beautification opportunities."

The project in South Philadelphia will include new signage and pavement markings, new lighting, enhanced accommodations for trucks and buses, and a shared-use path for pedestrians and cyclists. The purpose of the roundabout is to "calm" traffic in a way that ultimately reduces congestion and delays.

The intersection will remain open during the construction phase with short-term closures and truck detours as needed. The Streets Department says access to nearby businesses and residences will not be negatively impacted.

Last fall, construction was completed on a roundabout at the dangerous Fishtown intersection of Frankford Avenue, East York Street and Trenton Avenue. The project's improvements not only redirected the flow of traffic, but added green space, new lighting and improved curb line configurations that will serve new development planned around it.

Other intersections the city has considered for the roundabout program include Ardleigh Street and Vernon Road, Cobbs Creek Parkway and 70th Street, Montgomery and Belmont avenues, and Pine Road and Shady Lane.

The push to improve road safety in Philadelphia is part of the city's Vision Zero commitment, a long-term plan to eliminate traffic fatalities through forward-thinking design.

Last year's Vision Zero progress report showed that traffic fatalities were up in all categories in 2020, marking the city's deadliest year since 1990. Aggressive driving during the COVID-19 pandemic has been among the primary reasons for the rise in deadly crashes, according to the report.

Construction on the South Philly roundabout could begin as soon as summer 2022 and may take several years to complete. The Streets Department will provide a more detailed timeline for the project as the design phase is completed and plans move forward.