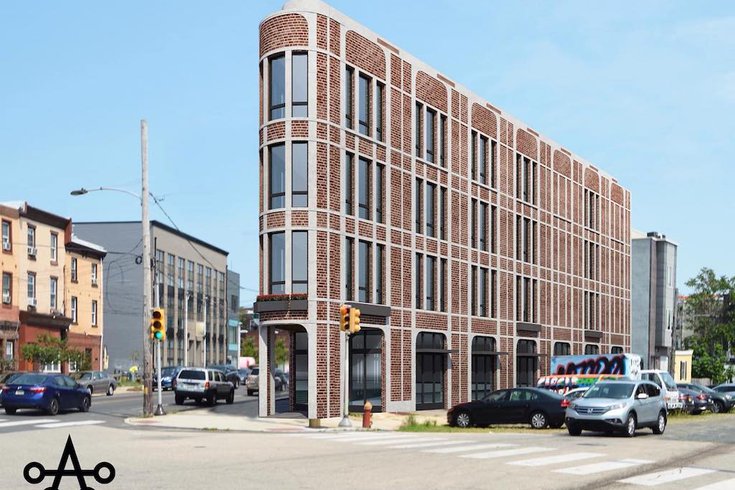 A rendering shows a proposed project that will replace an existing structure at the intersection of Frankford Avenue, East York Street and Trenton Avenue in Fishtown.

PennDOT has parsed through safety statistics across the state in recent years to demonstrate the effectiveness of replacing traffic signals with traffic circles at dicey intersections.

Philadelphia is no Washington, D.C. when it comes to roundabouts. They're most notably found here at Logan Circle and Eakins Oval, with some others scattered across the city.

But construction activity began this week on a traffic circle at the intersection of Frankford Avenue, East York Street and Trenton Avenue in Fishtown. The intersection, considered an elevated risk for drivers, was included last year in Philadelphia's High Injury Network, an accident tracking database that forms part of the city's Vision Zero plan.

A Streets Department spokesperson explained that the High Injury Network's mapping methodology no longer includes the Fishtown intersection, but it remains eligible for the city's Modern Roundabout Program due to an analysis of crash data.

A draft plan for the modern roundabout at Fishtown's Frankford-Trenton-York intersection. 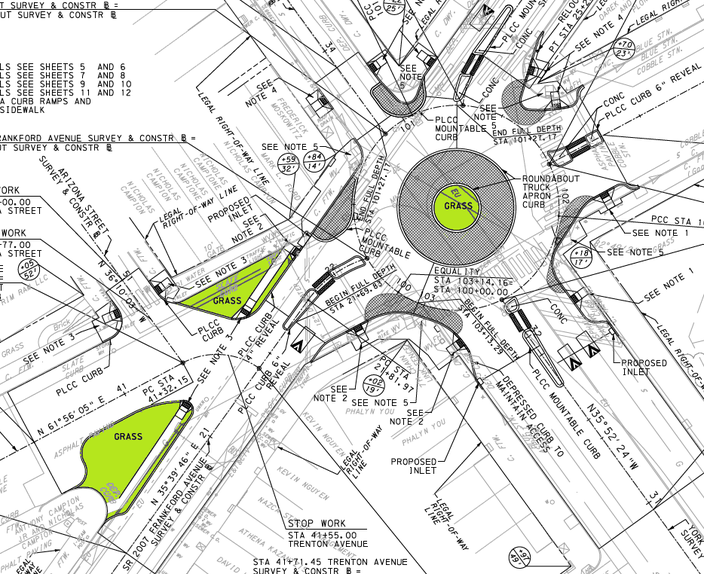 Another drawing of the construction plans at Fishtown's Frankford-Trenton-York intersection.

It's expected that the entire intersection will be closed for construction through the summer.


Two detours will be posted during the work, one for smaller vehicles and another for trucks. The small vehicle detour will send vehicular traffic northbound from Tulip Street to Huntingdon Street and southbound from Coral Street to Dauphin Street. The truck detour will direct trucks to use Girard, Aramingo and Lehigh avenues. SEPTA will detour the Route 5 bus during the intersection's closure.

Once the work is done, there are plans taking shape for a project that would bring 15 apartments and retail space to the intersection, according to OCF Realty. That project will be led by Ambit Architecture.

Last September, PennDOT released data on a study of 22 intersections where roundabouts had been installed. Crashes at the locations dropped by 21%. Fatalities were eliminated.

JPC Group Inc. has been awarded a $1.28 million contract to complete construction of the Fishtown roundabout. The project is being funded using Automated Red Light Enforcement funds.

"The initial cost for a roundabout is almost twice as much as it costs to put new signals in," Gus Scheerbaum, director of strategic initiatives for the Streets Department, told Star News. "But it’s more affordable in the long run because there’s less maintenance."

The Modern Roundabout Program aims to replace geometrically complex signalized intersections in the city. Other intesections that have been considered for roundabouts include Ardleigh Street and Vernon Road, Cobbs Creek Parkway and 70th Street, Montgomery and Belmont avenues, and Pine Road and Shady Lane.

Beyond the inconvenience of detoured traffic in Fishtown this summer, the benefits of the roundabout should become clear with improved safety at the intersection.

And contrary to one Pennsylvania man's paranoid delusion — no, roundabouts will not increase tornadoes in Fishtown.