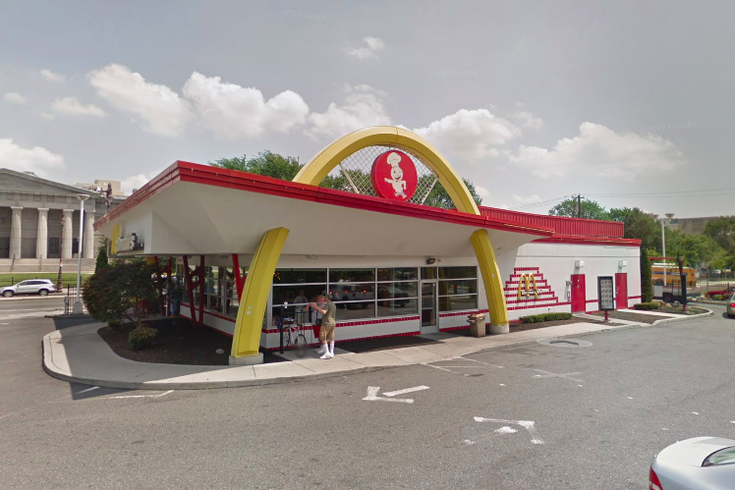 Since the early 1970s, McDonald's has had a location at Broad and Carpenter streets in South Philadelphia. The store is now closed.

A retro-style McDonald's location on South Broad Street has closed, becoming the fast food chain's second South Philly store to shutter in the past few years.

The store on the northwest corner of Broad Street and Carpenter Avenue, known for its vintage Speedee mascot logo and roof-protruding arch, was roped off this week and had its menus removed.

Public property records for 914-24 South Broad Street do not show a recent sale, but as OCF Realty pointed out this week, those records are not necessarily updated when a property is under agreement. There are several lots there, including a parking lot, owned by McDonald's.

The building, despite its old-style look, was actually renovated to capture the vintage branding in 2000. A more ordinary McDonald's existed at the location going back several decades to the late 1960s or early 1970s.

The lease for the restaurant was set to expire in April 2021.

The McDonald's was set in an area that has seen rapid redevelopment in recent years, including the completion of Lincoln Square and the addition of Sprouts Farmers Market.

In April 2018, McDonald's closed its store at 2033 South Broad Street, where it had been for 30 years. That property is supposed to be replaced by a USA Vein Clinics location.

The McDonald's lot at Broad and Carpenter is about 17,000 square feet, so whatever eventually takes over the space could depend on whether additional lots around it were sold.

NOTE: This story was updated on Feb. 18, 2021, after it was published to reflect that, while there has been a McDonald's building at this location since the 1970s, the one currently on the property is not the original structure. The current McDonalds was constructed in 2000 with a retro design and using the fast-food chain's older branding.