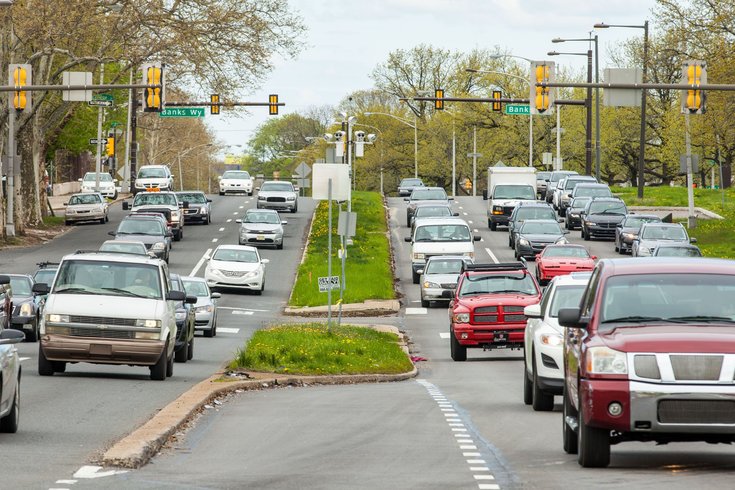 Philadelphia police are investigating a hit-and-run crash on Roosevelt Boulevard that resulted in death of a cyclist on Tuesday, Oct. 5, 2021. The Boulevard is among the city's most dangerous streets and has been a focus of its Vision Zero commitment.

A bicyclist was killed by a hit-and-run driver Tuesday night on Roosevelt Boulevard, Philadelphia police said.

The crash came the night before Philadelphia released its annual Vision Zero report, which tracks the city's the progress toward its goal of eliminating traffic fatalities by 2030.

The victim, a man in his 20s or 30s, was riding his mountain bike westbound on Adams Avenue and crossed onto Roosevelt Boulevard, where he was struck by a white and blue Ford F-150 traveling north, according to police. The truck fled the scene and continued traveling north.

The crash occurred around 7:30 p.m. The victim, who was not identified, was taken to Temple University Hospital, where he was pronounced dead shortly after 8 p.m., police said.

An investigation into the crash remains ongoing as police search for the driver of the Ford F-150.

Traffic fatalities were up in all categories last year despite lower-than-average vehicle volume during the pandemic. Fatal crashes increased by nearly 88% from 2019, rising from 83 to 156, according to the Vision Zero report. It marked the city's deadliest year for traffic fatalities since 1990, when there were 169 fatalities, according to PennDOT data.

The situation has not looked much better in 2021, according to data tracked by the Bicycle Coalition of Greater Philadelphia.

There have been 88 traffic fatalities in 2021, including eight on Roosevelt Boulevard. The deaths include 33 vehicle occupants, 28 pedestrians, 17 motorcyclists, seven bicyclists and three ATV riders.

"The person was killed crossing Adams Avenue at a notoriously dangerous, confusing intersection that was built without pedestrians or people on bicycles in mind," Lobasso said. "The victim is one of 88 people killed in traffic in Philadelphia in 2021, and one of 40 hit-and-runs that happen in Philadelphia every single day."

The Bicycle Coalition has said aggressive driving is a significant factor in the rise in traffic deaths. That view is supported by the Vision Zero report, which attributed 42% of all serious injury and fatal crashes in 2020 to aggressive driving, including speeding.

Total crashes were actually down 13% in 2020. They resulted in more fatalities, but the rates of serious injuries remained roughly the same as the previous year.

Pedestrians were the victims in about 38% of the crashes involving serious injury or death. Mayor Jim Kenney emphasized the need to protect their safety.

"We remain committed to continue to work on our goal of zero traffic deaths by 2030. We cannot accept lives lost as the cost of getting around our city," Kenney said. "If we design our streets for the safety of those most vulnerable — people walking — we can improve safety for everyone living, working and traveling on them."

The Vision Zero report highlights $6.9 million in grants awarded this year to make improvements to High Injury Network roadways, a collection of the most dangerous streets in the city. Protected bike lanes remain a major focus of the initiative, which calls for 40 miles by 2025.

Philadelphia's network of protected bike lanes grew to 13.5 miles by September, including the addition of 5.3 miles this year.

Roosevelt Boulevard, which accounts for 14% of all fatal crashes, remains the most deadly travel route on Philadelphia's High Injury Network and disproportionately results in deaths to people of color.

The installation of speed cameras last year reduced speeding violations on the Boulevard by 93% between June 2020 and February 2021, according to the Vision Zero report.

"Roosevelt Boulevard is a gigantic highway passing through residential neighborhoods where people cross every day and it's time the city and state do something about this road," LoBasso said. "This road was not built for pedestrian access and people will not be safe on it until it is structurally changed. While the speed camera program has been a positive change for the Boulevard, it is not a long-term solution. We need to start seeing real infrastructure changes on the Boulevard and other wide, fast streets like it.

"Until that happens, you're not going to see the sort of dramatic change the city desperately needs to keep its streets safe," Lobasso added.

Anyone with information about the hit-and-run crash on Tuesday night is urged to submit a tip to Philadelphia police.