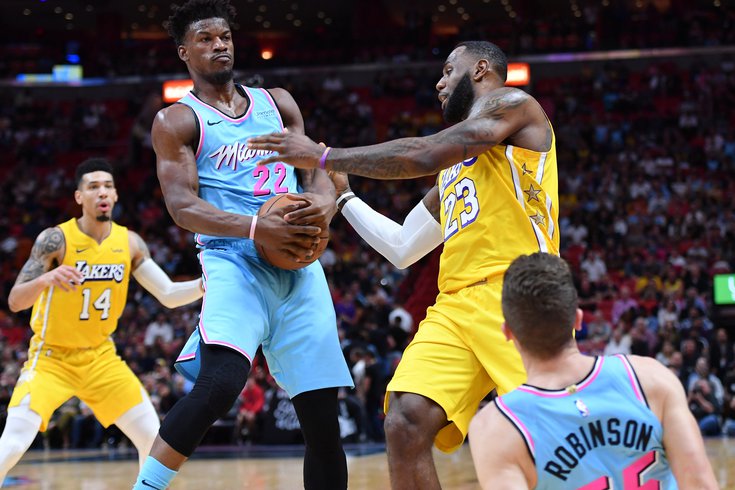 Are you confident in LeBron James for Finals MVP? What about Jimmy Butler?

The NBA Finals have arrived, and it's a Philadelphia sports fan's worst nightmare. In one corner stands the Los Angeles Lakers, the ultra-successful Western Conference franchise everyone loves to hate. In the other stands the Miami Heat, led by the man who the Sixers could have tried to build around offseason, Jimmy Butler. Everybody loses!

You may be at your wit's end with this NBA season for any number of reasons, but maybe you're still looking for a reason to tune in. My friends, there's no better way to add a little juice to the upcoming series than (legally) letting a little money ride on the outcome.

As a disclaimer, I am not responsible for any losses incurred by following my advice, and my choices are based on a combination of series analysis with recent and historical trends. If I could get it all right all of the time, it wouldn't be gambling, so let's have some fun with some odds from TheLines.com.

If you're betting the Lakers

Lakers to win in six games (+325 at DraftKings, via TheLines.com)

This is about not overthinking things and rolling with the better team. Miami absolutely deserves to be taken seriously as a threat to win this series, and they have the better coach to make adjustments as needed. But the Lakers have shown much more than they need to in order to be treated as the favorite.

Miami has been terrific defensively throughout the bubble, in part because their zone defense that confounded the Sixers in the regular season (boy does that feel like a lifetime ago) has continued to trip up everybody in the playoffs. But in spite of the series loss in the Conference Finals, the Boston Celtics chipped away and exposed holes as that series wore on, putting on tape what the Lakers need to do to overcome that hurdle.

They were already well-positioned to deal with it anyway. L.A.'s two best players are both capable of wreaking havoc from the middle of Miami's zone, whether LeBron James or Anthony Davis are looking to score or playmake from the free-throw line. Offensive rebounding has been a strength for the ultra-big Lakers all season, which happens to be a systemic weakness of zone defense.

There will likely be a cold shooting night or two for the Lakers in this series. The Heat have a lot of bodies to throw at LeBron, and they might succeed in limiting his impact at times. Erik Spoelstra knows him as well as any opposing coach. But most of the positive things you could say about the Heat apply to the Lakers, a big, athletic, defensive-minded team that has built toward this moment all season, and they happen to have the two best players in the series on top of that.

You could probably talk me into Lakers in five games as well, but with slightly better odds and respect for the Heat, this is where I settle. You're not going to get much value betting the Lakers ahead of this series, if we're being honest.

I know, I know. LeBron James winning the Finals MVP feels inevitable. He has been the best player on every team he has ever won a title with, he's trying to make his case as the GOAT, and as we often see in sports, these awards often come down to historic resume rather than the person who truly deserves it in a given series.

But Davis has been at the very least his equal for most of L.A.'s playoff run, at times his superior depending on the matchup, and this series feels like a better one for Davis to take the lead in.

Some of that is connected to Miami's extensive use of zone that we'll almost certainly see, but a lot of it comes down to the options the Heat have beyond Bam Adebayo on the frontline. Looking at sub patterns for both teams throughout the playoffs, Adebayo tends to hit the bench during the same stretches where LeBron does, leaving the Heat with a lot of questions to answer about how they guard Davis during those stretches (assuming rotations remain reasonably static). Going small, a Miami favorite throughout the playoffs, probably won't cut it here.

If this were closer to even odds, I would probably say to just let your money ride on the three-time Finals MVP even as the favorite. At almost 3-1 odds and with my expectation being the Lakers win the series, happy to buy in here.

Goes hand in hand with the above belief. Yes, LeBron's usage and scoring tends to go up in the Finals, but this is not the LeBron that had to carry a supporting cast as the undisputed No. 1 every single night. If I get burned because he has been saving an extra gear for the Finals, which is a real possibility, I'll still enjoy seeing apex LeBron on the biggest stage as a fan of the sport. Not many of these moments left for him.

If you're betting the Heat

Looking to bet against LeBron in some form or fashion? This is the best way and time to do it. Across his first nine NBA Finals, LeBron's teams are just 2-7 against the spread in Game 1s, with one of those wins coming in the 2018 Finals (where his Cavaliers were a whopping 13-point underdog to the Golden State Warriors). That tracks with the belief that he uses a lot of early games in series as feel-out periods, waiting to strike after he has a better understanding of how he'll be defended.

There's less pressure than ever for a favorite to throw their best punch in Game 1, with homecourt advantage removed and the players going to work in the same setting over and over again. I don't think I would pick the Heat outright, but I'd rather have the points as we wait to see what form the series takes.

I'm a believer in this Heat team to make the Lakers sweat, if nothing else. Not expecting a pushover series.

I was prepared to make my case for Bam Adebayo in this space assuming the odds would be tilted a little too heavily toward Butler ahead of the series. He has probably been their most important player in the playoffs because of his two-way impact, even if he's not doing the heavy lifting as a scorer on a team with lots of capable options.

Instead, I came to find out Butler and Adebayo have the exact same odds over at DraftKings after early action came in heavy on Adebayo, and if you're going to put them on even footing, give me the guy with the easy narrative sales pitch. Labeled a troublemaker, an a**hole, a malcontent at his previous three stops, Butler punched his ticket to Miami and remained the same two-way force he has always been, this time for an organization ready and willing to embrace him.

If the Heat are going to win this series, it's likely going to take some crunch-time theatrics from the man himself. It has not always had to be Butler in those moments for the Heat this postseason — they have gotten big efforts from Goran Dragic, Tyler Herro, and Adebayo — but these are the Finals, after all. When push comes to shove, it's going to be Butler time in the big moments.

And when someone forces people to reevaluate what we thought we knew about them, that often leads to some overcorrecting. If the Heat somehow win the title, Butler will probably get a little too much credit for it by virtue of being the best and most prominent player on a deep, unselfish team. That's not a knock on him — he'll get undue criticism if they lose, too.

Spicier gamblers might want to throw a little wager on someone like Goran Dragic at +3000, but give me Buckets.