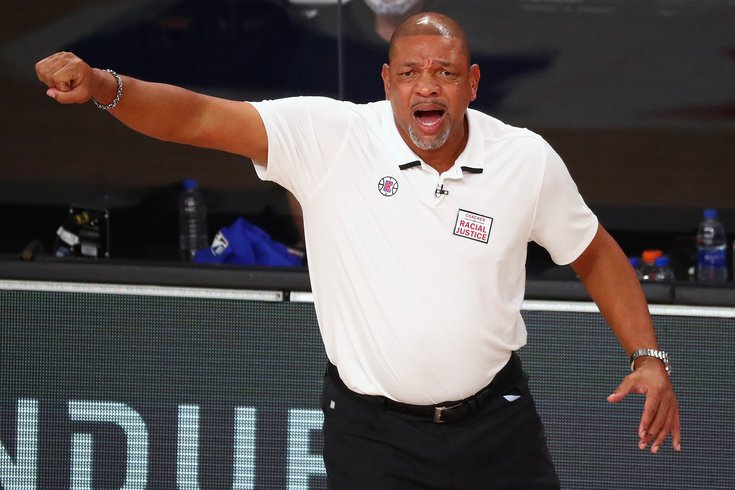 Will Doc Rivers emerge as the best fit to coach the Sixers next season?

Doc Rivers has been on the coaching market for less than a day, and already the rumors are beginning to swirl about him landing with the Philadelphia 76ers.

Former player and current ESPN analyst Kendrick Perkins, who played under Rivers for 6.5 seasons in Boston, talked up Rivers' fitness for the job on the Scal and Pals podcast, where he revealed that Rivers has already talked extensively with members of the Sixers' organization.

SCALABRINE: Let me ask you this Perk. Doc's a player's coach. If you want to to win and you're competitive, I don't understand how a player would not want to play for Doc Rivers.

PERKINS: Well, it's a different breed. It's a different breed. I heard he's having a lot of conversations with the Philadelphia 76ers. Right now, that's where he's getting the most interest and I think that's, he would be a great fit with them. I honestly believe Doc with Joel Embiid, that's what he needs. He needs a person like Doc. Think about what DeAndre Jordan did under Doc Rivers. Hell, think about what I did under Doc Rivers. Doc Rivers gets the best out of you.

Doc Rivers gets the best out of you, you know that. You know he's able to manage egos and stuff like that. But to nip it in the bud, when you go back to the Clippers, the Clippers were just soft mentally. They had that tough guy, talk all that noise mentality, but they didn't show it on the court...it was times when Doc [in Boston] used to be like, 'Alright, enough of the talking, we got to show up and play.' And we would actually show up and play. [Scal and Pals]

While Perkins is a mixed bag as an analyst to say the least, his relationship with Rivers affords him plenty of insight into what may or may not be happening with the veteran head coach right now. And with sources already confirming to PhillyVoice that the Sixers reached out to Rivers within hours of his departure from the Clippers, it's time to start taking Rivers seriously as a candidate for the open position.

To Perkins' point on the basketball merits of such a move, Rivers does seem like one of the best candidates (if not the best) to get the most out of Joel Embiid. His track record of working with big men is far more extensive than Tyronn Lue's or Mike D'Antoni's — his best years as a coach came with Kevin Garnett as the tip of the spear for Boston, with Rivers eventually getting Garnett to buy into full-time five minutes after a career of preferring to play power forward. They're different players in many ways, but it's a deeper well of big-man experience to draw from.

The Jordan years in L.A. are a bit less compelling to me because Embiid is not going to wake up tomorrow and turn into a high-flying rim-runner. But the bottom line is Rivers has plenty of practical experience with and room in his heart for traditional big men.

"I heard he's having a lot of conversations with the Philadelphia 76ers." - @KendrickPerkins

A more interesting subplot from his Clippers years as it relates to Philadelphia is the dynamic between Chris Paul (who was arguably the real driving force behind Jordan's rise) and Rivers. In 2018, ESPN's Kevin Arnovitz reported extensively on behind-the-scenes politics in L.A., and revealed Paul told owner Steve Ballmer that Rivers had contributed to his exit:

After Paul exited for Houston, Clippers owner Steve Ballmer reached out to his former point guard. As a relatively new owner, Ballmer wanted to learn from his organization's mistakes and invited Paul to share his thoughts about the current state of the franchise and, more pointedly, his reasons for leaving. When the two met over breakfast, league sources say, Paul stated that Rivers was one of the contributing factors. [ESPN]

With Paul still looming as a potential Sixers trade target this offseason, that relationship would come into focus big-time for Philadelphia. It seems things have cooled in the years since, however. During the tumultuous NBA meetings during the league's work stoppage earlier this month, Paul (current President of the NBPA) invited Rivers to speak in front of a meeting of the remaining teams in Orlando. Asked about their relationship after that news leaked, Rivers told reporters they had mended fences.

“Our relationship is great,” Rivers said. “We put that behind us a year ago at least, golfed a bunch this summer before the season started. We cleared the air long ago. That happens from coach-player a lot. Usually when a guy leaves a company, in business, most of the time it’s not on great terms, even if they’re just going to another opportunity, but usually you come back to that company and say thank you and appreciate all the things you’ve done, and I think that was CP and our case."

Rivers' late entry into the race does complicate matters for the Sixers, as they were prepared to interview Clippers assistant Tyronn Lue on Tuesday, with Lue expected to meet with ownership during the latest interview round. They're pretty far along in the process, and Lue is now considered one of the favorites for the open Clippers job, putting pressure on all sides to get deals done and put the best offer on the table for the next head coach, whoever that might be.

It seems there are still a few twists and turns left in an offseason that has been slow and full of surprises for Philadelphia. We'll keep you posted with all of the latest rumors as they come along.