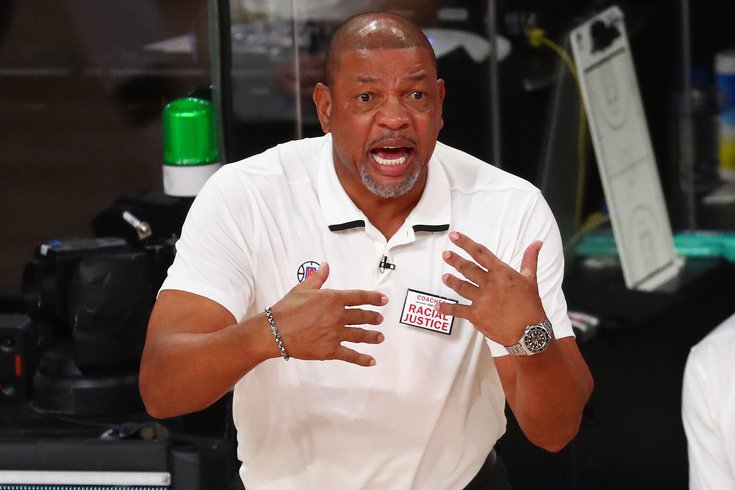 Just when you thought the twists in the Sixers' coaching search were over, think again. Doc Rivers was relieved of his duties as Clippers head coach on Monday evening, adding another high-profile name to the candidate pool.

Rivers, fresh off the sting of a 3-1 lead collapsing in the Western Conference Semifinals, will have to have the desire to coach again right away in order for anything to come to fruition, but he becomes arguably the most accomplished head coach on the market. A title-winner with the Boston Celtics in 2008, Rivers has coached teams to winning seasons in 13 consecutive years, juggling on-court responsibilities with a lot of heavy lifting away from the court for one of the league's historically chaotic franchises.

His entry into the coaching search doesn't just warrant a look at his own candidacy, it necessitates an examination of how the market changes from here. And with sources saying the Sixers have already put out feelers for Rivers in the hours after his firing, confirming initial reporting from Marc Spears of The Undefeated, it seems there is a new wild card to consider.

Does Doc fit in Philly?

Taking a bird's eye view of this thing, Rivers makes a lot of sense for the Sixers' opening. Other than the fact that, as the great Marc Zumoff likes to remind viewers, there's only one Doctor in Philadelphia.

While Rivers and the rest of the 2008 Boston Celtics have gotten an undue amount of credit for that lone title, his work over the last decade-plus has reflected well on him as a leader and tone-setter for a franchise. A winner of 943 games across 21 seasons, Rivers (along with an infusion of talent) built a culture for the Clippers from the ground up. That was reflected both in record and in what the team had to endure away from the floor, most notably the racism scandal that finally got former owner Donald Sterling ousted from the NBA.

Rivers is in rare territory as an NBA head coach, a so-called "players coach" who nonetheless is a no-nonsense leader of men. It's what allowed him to ultimately have success with personalities that were all over the map — a fiery shit-talker in Kevin Garnett, a perfectionist in Ray Allen, a micromanager in Chris Paul, and so on down the line.

"The thing that he does that separates him from the rest of the coaches is he allows players to be who they are,” former Celtics role player Keyon Dooling said in 2012. “He’s not going to bombard with you a whole bunch of rules, regulations. The little things that a lot of coaches trip off of in our league. He gives us so much leeway, so much freedom to be who we are, as long as you do your job. He treats us like men.”

That's a middle ground between the Bobby Knight chair-throwing types and the coach the Sixers just moved on from, Brett Brown. And that may indeed be what the Sixers need: accountability that shows an understanding for the different personalities already in place.

Rivers does not bring a one-size-fits-all approach to man management, and in fact, explicitly said the opposite is the most important thing he has learned over time.

"The things that I know now that I didn’t know when I first started are mostly how to deal with people more than X’s and O’s," Rivers wrote in The Undefeated in 2018. "Every single player is singular. That’s what you learn. You can’t group anyone. They all have their own way about them, and it’s our job to try to figure out each guy."

There are even shades of Rivers' most successful teams in place in Philadelphia. He won a title with a multi-talented, rim-protecting five and a point guard who couldn't shoot in Boston. In L.A., his arrival coincided with Blake Griffin's best-ever season, where he took over as the first option in Chris Paul's absence and led the Clippers to 57 wins in 2013-14. Griffin's growth as a multidimensional weapon continued the next season, with his improved passing (and eventually, improved shooting) rounding out a robust offensive game. Those experiences, and his ability to convince Kevin Garnett into playing full-time five during the later Boston years, show the touch of a coach who could help Embiid and Simmons get to the next level.

Then there's the "But..." you've all been waiting for. Rivers is not exactly the X's and O's wizard some fans might be hoping for. Rivers' Clippers nonetheless flamed out as a talented, identity-starved monster in the second round this season. For long stretches of the season and their playoff run, L.A. was a rudderless ship, and they offered no coherent defensive vision or offensive chemistry in their collapse against Denver.

Were that a one-year blip on his resume, it would be easy enough to write off, but Rivers' name is now most closely associated with playoff collapses. Only 13 teams in NBA history have lost a series after going up 3-1 in a playoff series, and Rivers was the coach for three of them: the 2002-03 Orlando Magic, the 2014-15 Los Angeles Clippers, and the 2019-20 Los Angeles Clippers. His inability (or unwillingness) to adjust in big moments would ultimately doom his teams, as did questionable, sometimes bewildering choices with his rotations.

Given the state of Philadelphia's roster, they need to take the regular season seriously, using 82 games (or however many we get in the post-pandemic world) to experiment and learn but also refine. The regular season records of Rivers' teams suggest he has done that, but the spectacular playoff flameouts they've experienced say otherwise.

Had the Clippers made the most of the regular season, they would (and should) have entered the playoffs with perhaps the greatest degree of flexibility in the league. A base of Kawhi Leonard and Paul George gives you the opportunity to do pretty much whatever you want. That possibility was never realized, and it's fair in the wake of that season to question if he can demand the standard the Sixers need to hit or show enough creativity to make the most of this team.

Granted, some of Rivers' best coaching jobs have come with teams without sky-high expectations. It was under Doc Rivers that Tobias Harris had his best ever run of play, another feather in his cap that makes him attractive to Philly. With his Celtics veterans running on fumes, Boston nonetheless pushed the LeBron-era Heat to seven games in the 2012 Conference Finals, a series they might have won if not for James turning in perhaps the best performance of his career in Game 6.

But the Clippers won just three series in seven years in spite of an abundance of talent, and while injuries to Chris Paul and Blake Griffin loomed large there, you are what your results say you are. Rivers' resume says he is a very good coach who has struggled to make high-value tweaks when his teams need them most, and the steward of a lot of very good teams who would end up being bounced by opponents with inferior talent.

The most obvious impact is the opening Rivers leaves behind in Los Angeles. It just so happens that Tyronn Lue, one of the remaining favorites for the Sixers' job, is already an assistant for those same Clippers. If Lue is after the best chance to win right away, the Clippers with Kawhi Leonard and Paul George are streets ahead of the Sixers (albeit with some long-term concerns due to the assets sacrificed to pair them).

Adrian Wojnarowski, who broke the news of Rivers' exit from the Clippers, almost immediately named Lue as one of the prime candidates for the position.

Doc Rivers had two years left on his contract, sources tell ESPN. This is a challenging coaching search for Clippers, who are the ultimate win-now team. Among top candidates in the marketplace: Clippers assistant Ty Lue and former Rockets and Knicks coach Jeff Van Gundy. https://t.co/Ov02RYNbK9

That's problematic for Philadelphia for multiple reasons. At this point in the search, it does seem that Mike D'Antoni has emerged as the legitimate favorite for the job. On the other hand, some believe that position has been floated as an act of leverage to keep the asking price down for Lue. Now that he might have a chance for a better win-now job in L.A., and one where he already knows the star players in question, that nukes any sense of leverage the Sixers might have thought they had.

Extending beyond Lue, the Sixers no longer have a claim for the best opening left on the market. You probably could have made the case for them before even with the inherent baggage in Philly. The New Orleans Pelicans are too young and too unproven to compete immediately, the Rockets cashed in on an obviously declining Russell Westbrook, and the Pacers lack true top-end talent even without considering Victor Oladipo's supposed desire to leave. You may ultimately get one good year to compete with this Clippers group, but they have the firepower to draw anyone's attention.

There is another complicating factor in the Rivers fracas for Philadelphia — does Rivers' entry to the marketplace change the organizational say a coach might have in Philly? Rivers dropped some of his player personnel responsibilities over time in Los Angeles, but he might look at the situation unfolding in Philadelphia and think he can ask to have a larger voice in a messy front office. Elton Brand is well-liked around the league, but he's a fresh face who has up to this point been willing to accept public blame for decisions that are not all his own.

And if that doesn't apply to Rivers, perhaps that applies to other coaches the Sixers are in the mix for. With another attractive job open, the best and biggest names have better leverage to demand what they want from Philadelphia. D'Antoni, who would be inheriting a team that looks nothing like his ideal set of parts, is an obvious candidate to throw his weight around and influence the team's direction. I'm not breaking any news by telling you it's rarely a good thing to have coaches with considerable front office power, in the NBA or otherwise.

If you are asking me, I still think Lue is the best blend of tactics and discipline the Sixers can find on the market, save for hiring an unknown assistant option. Rivers vs. D'Antoni is somewhat of a toss-up for me. One is a much better on-paper fit for the personnel with very few "political" consequences (e.g. there's little risk of the system alienating one of Embiid or Simmons), the other has had fewer high-profile failures in the playoffs and has historically been more of an innovator offensively.

With Lue seemingly in line for the Clippers job, that leaves the Sixers with good, solid options but perhaps not a slam-dunk candidate. Rivers will be in the mix, and we'll continue to wait and see how it all shakes out.