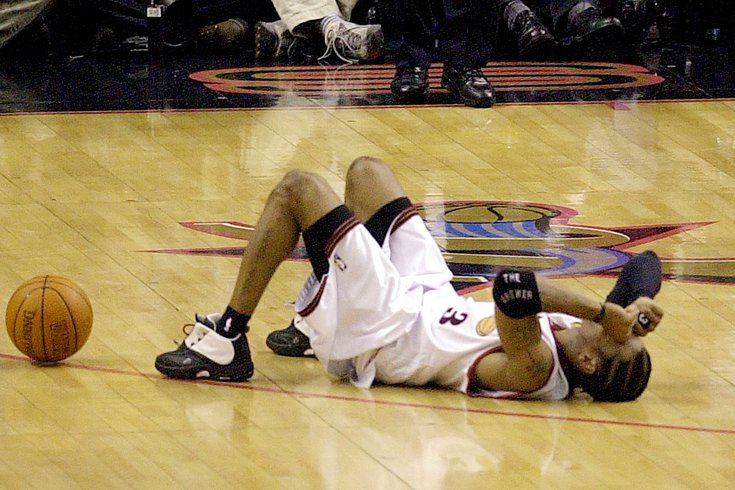 The Sixers' Allen Iverson is dejected after missing a shot and not getting a foul called during Game 3 of the 2001 NBA Finals.

In the history of the city of Philadelphia, 14 championship banners have been raised in total by the Sixers, Flyers, Phillies and Eagles. But that doesn't mean there have only ever been 14 great teams in the city.

And it also means that plenty of all-time greats that have worn this city's uniforms have played their entire careers without getting a championship ring as a player.

We compiled a list of the top 10 players whose careers ended empty-handed — keeping in mind that some Philly greats like Reggie White for example, won titles in other cities. Those players aren't on our list, but there are plenty of others to look back on.

We took two factors to heart when ranking the players below:

Roberts is one of the best pitchers of all time who was unfortunate enough to be a Phillie during a stretch that saw them make one postseason appearance. Roberts pitched 11 innings of World Series ball allowing two runs in a four-game sweep at the hands of the Yankees in 1950. He was a seven-time All-Star.

He's still just 32, and is on a very promising Flyers team so he may be knocked off this list before his career ends, but for Giroux — considered among the greatest Flyers of all time already — a title seems to be elusive. He has played in 69 career postseason games, including scoring 21 points in 23 playoff games in 2010, his second season in the league. It was the best attempt he's had so far, with the Flyers losing in six games to the Blackhawks that year.

Cunningham won one playoff game with the Eagles, in 1994, but came up short in four other tries. He's one of the best and most underrated quarterbacks in franchise history and went on to succeed in the latter half of his career with the Vikings, winning a pair of playoff contests in Minnesota. In today's game, Cunningham would fit in perfectly.

As you can see, Lindros was a prolific scorer. And similarly to Giroux, Lindros made one Stanley Cup run in 1997 when he led all playoff scorers with 26 points. That the loaded Flyers teams of the late 1990s never won a Cup is a lingering "what if" for Philly fans. Lindros' Flyers career ended in injury and drama as he was eventually dealt to the Rangers in 2001.

Halladay was only a Phillie for four seasons, making 103 starts for the team before retiring — but he was a two-time All-Star, won the 2010 Cy Young award and nearly won it in 2011 too. He pitched a perfect game in the regular season and a no-hitter in the postseason during one of the most memorable seasons in city history, in 2010. Halladay made five playoff starts here, after pitching for 12 seasons in Toronto without a single trip. He allowed 10 runs in 38 innings (2.37 ERA) and was a part of teams in 2010 and 2011 that were arguably better than the lone World Series champion squad in 2008. As one of the few members on those teams who wasn't around in '08, Halladay retired and later passed away tragically never having raised the World Series trophy.

Ashburn was a teammate of Roberts, and as such was party to a Phillies squad that finished 16 entire games behind first place in eight of his 11 seasons in Philly. Most young fans know his name thanks to Ashburn Alley, located behind the outfield at Citizens Bank Park but Ashburn was one of the best outfielders in team history, as well as a broadcaster for the team for decades. His lone postseason chance was as a 23-year-old in 1950, where he hit .176 in the four-game sweep by New York.

Barkley spent the longest stint of his career in Philly, the team that drafted him, and was a part of six playoff runs, scoring 22.4 points and nabbing 13.1 rebound per game in 51 total tries. The 11-time All-Star led his team in win shares in each of those seasons, winning at least one series in four of those years. Barkley would eventually demand a trade — reportedly because he wanted to win — and made the NBA Finals in 1993 in Phoenix, where he'd fall to the Bulls after an MVP regular season. Barkley is one of the greatest basketball players in history not to win a championship.

McNabb — until Carson Wentz unseats him, and depending on your own personal rankings maybe he already has — is the best quarterback in franchise history, having started an impressive 16 playoff games with nine wins. In fact, he won a playoff game in six of his seven trips to the postseason. He led the Eagles to the Super Bowl in 2005 where they fell to the Patriots,. McNabb was the QB1 of the most successful stretch of Eagles football in team history.

We don't want to waste your time telling you how good Dawkins was. He was perhaps the greatest Eagle of all time. His stats do all the talking, not to mention the four picks, three forced fumbles, two sacks and 84 tackles he had in Philly in the NFL playoffs. Dawkins never won a ring as a player, but as a member of the front office in 2017, Dawkins rightfully got the hardware he deserves.

The Sixers never won a title during Iverson's reign — but there is no way to fault him for that. As the front office struggled to find a way to build a winner around him, Iverson appeared in 71 playoff games with Philadelphia, nearly an entire extra regular season's worth of games. In them, he averaged a tick under 30 points per game, playing an average of 45.5 (of 48) minutes. (For contrast, Michael Jordan played in 42.3 postseason MPG, while Kobe Bryant averaged 39.3. From our research, only Wilt Chamberlain played more, ever.) He gave every ounce of strength he had in every postseason game, including the team's famous 2001 NBA Finals loss to the Lakers. A.I. deserves a championship, but instead settles for standing ovations every time he is seen courtside at a Sixers game.