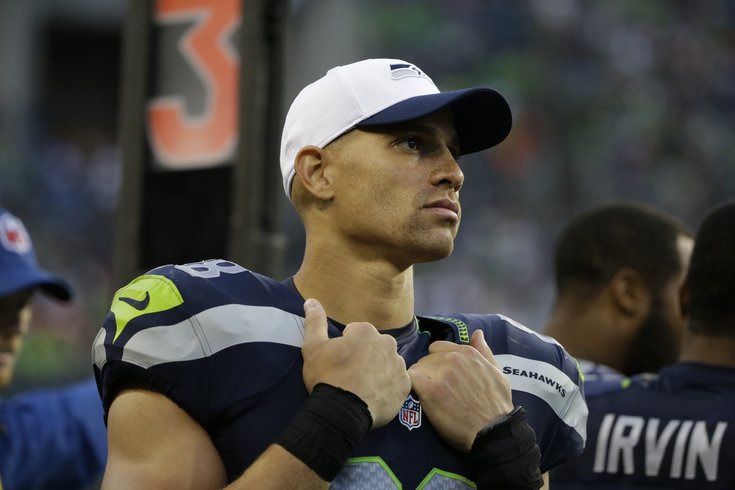 Seahawks' Jimmy Graham, the latest Pro Bowler to go down for the season, will make a great starting TE for this team.

Unless you've been living under a rock for the last few years, you're aware that the NFL has a concussion problem. But the issue is larger than that: they have an injury problem.

It's part of the reason there's so much parity in the league, because at any moment your team's best player could be done for the season -- or longer -- with an injury. However, it's also the reason there has been so much bad football on display this season.

If you play fantasy football, you likely know what I'm talking about. For example, my top two draft picks were Le'Veon Bell and Jordy Nelson. Nelson didn't even make it to Week 1 -- he tore his ACL in the preseason -- while Bell only played in six games this season. Friends of mine have had it even worse; one had Nelson, Jamaal Charles, Kelvin Benjamin, and Percy Harvin. That's almost not fair.

This isn't limited to the offense, either. Defenses across the league have been decimated by injury. And that got me thinking: What would a roster of injured players looks like?

We're not talking about just any injured players here -- that list changes from week-to-week and includes a wide range of ailments -- but rather only the players that are currently on their team's Injured Reserve (IR) or Physically Unable to Play (PUP) lists.

So I spent Wednesday evening (along with the help of Jimmy Kempski) combing through this CBSSports.com list of IR/PUP players, and the roster that began to emerge was quite surprising. Not only could it hold its own in a weak division, like the NFC East or AFC South, but it might be one of the best teams-- if not the best team -- in football.

That being said, there are a few caveats...

•  This isn't a full roster (i.e. a full 53-man roster), but it does have starters for every position on offense and defense, as well as some special teams guys and bench players.

•  If you want to argue over which players I have starting, you're missing the point. Honestly, it doesn't really matter if you'd start Percy Harvin over Keenan Allen or Jamaal Charles over Le'Veon Bell. We're splitting hairs at that point and the main purpose of this is to show you just how many really good players are sidelined.

•  The fact that the Cowboys aren't ready to put Tony Romo on season-ending IR because they're holding out hopes for the playoffs hurts my roster, but I'm not going to bend the rules just for him.

•  There was a surprisingly limited number of offensive lineman, and therefore I have a pair of centers -- John Sullivan and Kory Lichtensteiger -- starting at guard. I'll have my staff coach 'em up. Deal with it.

•  Don't mention the salary cap. If that's an issue for you, you're taking this way too seriously.

•  The offense is much better than the defense, especially at RB/WR/TE. Those positions are stacked.

•  There were no punters on IR, so I guess we'd have to sign someone off the streets, but with this offense, I don't foresee a ton of punts.

OK, so now that you've read my disclaimer, here's a look at my team -- which we're going to call the Injured Reserve Pups.

I dare you to tell me there's a roster anywhere in the NFL you'd rather have then this one.

Aside from the offensive line, which has more than a few question marks, this team is ridiculously stacked. Honestly, there aren't enough touches to go around. If this were a real team, some of those problems along the line could be fixed by two of your Pro-Bowl caliber running backs or wide receivers. This side of the ball is clearly the Pups' greatest strength, and depending on the coach, they could put up a ton of points.

The Pups defense is basically the opposite of their offense -- at least in the way in which the talent is distributed. Whereas the offense needed help along the line, the front seven here is arguable its best asset. The defense also lacks depth. As in, it has none at all.

But for this fictional scenario, it works just fine. This isn't the best defense ever assembled -- nor is it the best in the NFL right now -- but it is certainly good enough to compete. And if the offense can score as many points as it seems capable of scoring, that should be enough to win most games.

I didn't even mention that this team would be starting with ridiculous field position on almost every drive, did I? And yes, Cody Parkey made the team over Nick Folk.

I'm not saying the Pups would go undefeated or even win the Super Bowl, but they'd certainly be among the favorites. And I don't think it would be a stretch to say they could win 12 or more games.

That is, of course, assuming they stay healthy.