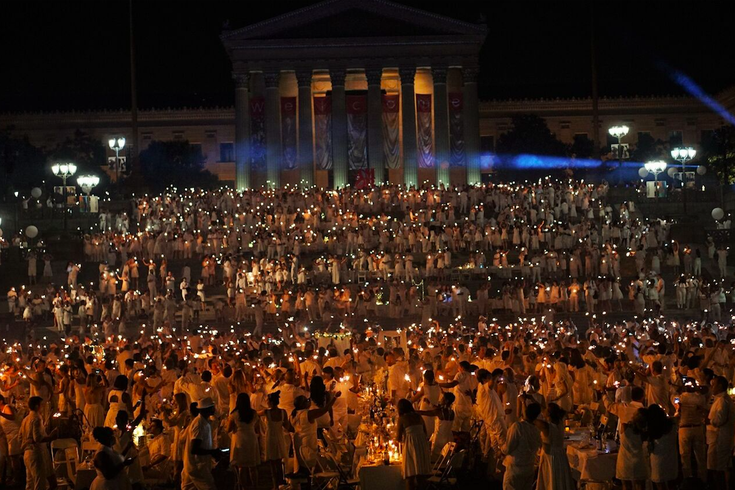 The '5,000 Points of Light' celebration outside the Philadelphia Museum of Art during Dîner en Blanc in Philly.

A lot has happened in America over the course of the past 39 days but – dare I say – nothing is as important as news that broke late last week about the upcoming Dîner en Blanc Philly.

Way back on June 1, we shared the exciting news that the awesome event’s waitlist had opened up for public-dining aspirants. I needn’t remind you of that, of course. That’s the type of happening for which you will always remember where you were when you first heard it.

Well, last Friday, the Inquirer’s Michael Klein broke news that organizers of “the stylish pop-up picnic … say they have a wait list of 43,000.”

Good Lord almighty, a lot of folks sure do like to pay to eat their own food in public rather than doing so for free the other 364 days of the year!

The story went onto share that all is not lost courtesy of a “new charity auction that grants early guaranteed access.”

Bidding started at $600 on Thursday. It has since jumped – courtesy of a second bid entered on Sunday – to $610. (These statistics are as of 3:05 p.m. Monday; it certainly may have skyrocketed in the time since).

All proceeds from the auction – per the organizers – will help the Fairmount Park Conservancy, which clearly will benefit in ways that, say, a Philabundance never could. (Perhaps they’ll be able to trim a few extra trees!)

Also, here’s a message, via press release, for the haters who think DEB Philly is emblematic of an elitist privilege that takes over public spaces at the expense of the public itself:

"Each year we donate event tickets to various organizations which they auction at their own benefits and galas throughout the year. Through our agreement with Diner en Blanc International, we are not allowed to officially partner the entire event with a charity, so this method allows us to reach a variety of organizations ranging from the American Red Cross and Alex’s Lemonade Stand.”

See? The event does give back via auctions at galas, even if it wasn’t explicitly spelled out on Twitter the other day.

There are a couple other ways to register for a chance to join Team DEB on August 17. You can find them here if you’re so inclined.

A look at the bidding for six Dîner en Blanc Philly tickets.

In closing, that this could be the Biggest DEB in American history is a huge deal.

The 5,200 attendance threshold absolutely crushes the record-low attendance of 1,590 who showed up in Miami for the Marlins/Phillies afternoon tilt on May 31. (Alas, it’s less than a third of the paid attendance for the Phillies smallest home-game turnout of the year on May 23 versus Colorado.)

Thanks to fire-code rules and regulations, DEB Philly will totally outdraw the “Rights To Ricky Sanchez” NBA Draft Party at Xfinity Live by a few hundred people, too.

Since we're talking about events and charities, I’m told that T-shirt sales, donations on site and two photo booths at that event raised more than $5,500 for the Alzheimer’s Association (Delaware Valley Chapter) and National Coalition Against Domestic Violence.

To be fair, though, those organizers only raised $700 for the Animal Relief Foundation Aruba solely from people who wanted to take their picture with Spike Eskin’s adorable dog, Rebel.

Bidding for the six DEB Philly tickets ends at 9 p.m. Tuesday. Here's hoping somebody is present enough to get that number above the puppy-pictures tally!