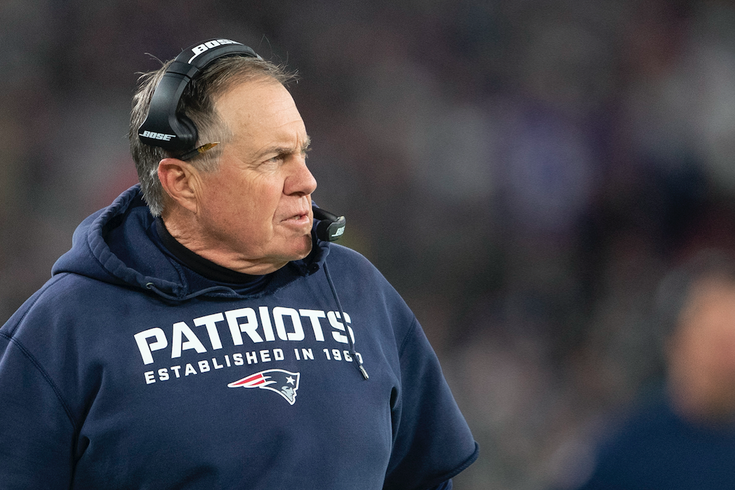 New England Patriots head coach Bill Belichick told reporters he has fond memories of Philadelphia from his childhood and during his time in the NFL. The Patriots will visit the Eagles this Sunday at Lincoln Financial Field.

Disliking Bill Belichick is a fairly effortless endeavor for most NFL fans outside of New England. The passion and rage during the Patriots' early dynasty years have become redundant.

You may find Belichick's dry demeanor funny (or rude), you may respect him (or think he's a cheater) and you may find his cut-off hoodies laughable (or a signature), but at the end of the day, he's the coach of a great team that's easy to hate.

Watching the Eagles beat the Patriots in Super Bowl LII was a triumph for all of the reasons stated above. This Sunday, the Eagles will have their first crack at New England since that 41-33 victory changed the face of Philadelphia sports.

Belichick spoke with Philadelphia reporters on Tuesday on a conference call ahead of Sunday's game at Lincoln Financial Field. Most of the interview posted on the Eagles website flows like your typical Belichick interview: suspiciously complimentary and terse.

But about 9-and-half-minutes in, Belichick was asked whether he has any particular memories that stand out about Philadelphia.

"I always got a real nice and warm reception from the fans," Belichick cracked. "I'm sure that'll continue."

Then he went on a long, nostalgic reflection about Philly:

There are a lot of memories for me from Philadelphia, going back to the Army-Navy game at JFK and to the Vet. From the Randall Cunningham 93-yard punt to winning there with Cleveland in 1994, the great rivalries with the Eagles when I was with the Giants. It was tough against Dick Vermeil, and then we did okay for a while, and then it was tough in the later 80's when they had some of those great defenses. You know, Jackson, Byers, a lot of those guys.

They're always a very competitive team. I think that Jeff Lurie and his family have done a great job with that franchise. They've been very competitive through the years, going back to Dick and Buddy and obviously Andy, and now Pederson is really an Andy disciple. They've always been a good defensive team as well, going back to Marion Campbell when he was there with Dick and obviously the Buddy Ryan years and now Jim Schwartz.

They've always been a tough team to deal with. The fans are passionate. It's a great environment. Memories of the lacrosse games there as well. The Final Four has been there several years. It's been a great environment there, too.

I've personally always had a real affection for the city of Philadelphia. I grew up there going to all the Army-Navy games the Saturday after Thanksgiving. Get up there on Black Friday and see all the shoppers out there, how busy it was at Broad Street, at the Square, Wanamaker's, Bellevue-Stratford. There's really a lot of great memories from my childhood, growing up, and those weekends in Philadelphia, to competing there in the division when I was with the Giants, Cleveland, and then these other random meetings as I've been in the AFC, some big games against the Eagles in a couple Super Bowls.

Belichick basically gave us his life story here, sheesh. The one thing to take away from this is that he clearly respects Philadelphia's history as a football town.

The reality for Eagles fans is that the Patriots are a measuring stick. There's always a little extra intensity and importance when they come to South Philadelphia, and we can only thank Belichick for being that guy whose team you want to beat more than anyone else.