Despite (and because of) BLM protesters, former president made his case for why people should vote for his wife 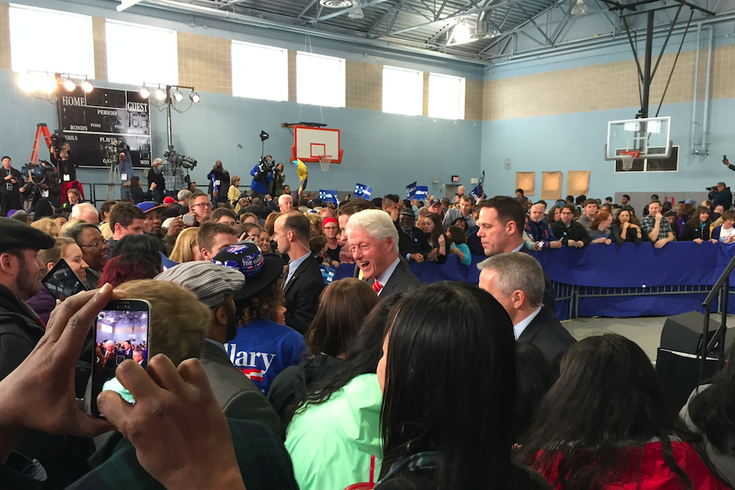 Former President Bill Clinton spoke to Hillary Clinton supporters during a rally at the Dorothy Emanuel Recreation Center on Thursday afternoon. Protesters made their voices heard during his 33-minute speech.

Former President Bill Clinton stood before a “Fighting For Us” backdrop at a Philadelphia recreation center not far from the Cheltenham Township border on Thursday afternoon and made the case that a certain relative named Hillary should assume his former job.

More than an hour before the scheduled start time, a line of supporters stretched from the front doors of Dorothy Emanuel Recreation Center toward John F. McCloskey Elementary School on Pickering Avenue. (At the front of the line was Sharif Street, son of a former Philadelphia mayor who is running for a state senate seat.)

Most had RSVP’d to event announcements, including one which came from “Team (Jim) Kenney” which declared that the organizing event offered a chance to hear “why Hillary is the only candidate to do all parts of the job in the White House and how she will raise incomes and break barriers that stand in the way of commonwealth families.” (Homemade signs, alcohol and large bans prohibited!)

Sure, it wasn’t the raucous affair featuring her primary opponent, Bernie Sanders, at Temple University’s Liacouras Center some 16 hours earlier. (Except for when protestors interrupted the former president. More on that later.)

The candidate wasn’t in this nook that some call Mt. Airy and others call Cedarbrook, after all.

Both U.S. Rep. Chaka Fattah and state Rep. Dwight Evans, who also will face off against one another on primary day, were among several hundred in attendance, though. They stood close to one another and near students who took a field trip from the neighboring school to sport Hillary-logo stickers, dance, and chant “HRC!” and “I’m With Her!” at a political rally.

Dancing in the stands as they wait for Clinton. (Yes, that's US Rep Chaka Fattah grooving on the front row) https://t.co/MrJdoTnYbt

The message was the same, according to Mary Jen Ramos, a field organizer who noted that the third state she’s worked in, Pennsylvania, “is a very important state. We know how important this election is.”

“As a woman, I know it’s time to have a woman president,” she said as the clock struck 1 p.m. to cheers that echoed off the walls of the rec-center’s gymnasium. “We cannot afford to lose the state of Pennsylvania.”

"I'm not here to say Bill Clinton or Hillary Clinton is a good or bad person. ... (B)ut their policies have hurt the black community, and they don't deserve the black vote." – Erica Mines, protestor at Hillary Clinton rally

“She’s giving our country hope,” said Kenney, recounting the hour and a half he spent with her at a re-entry event. “We can not let those Rs do what they want to do with us.”

“Philadelphia has always had a special relationship with the Clintons,” Rendell said.

Then, Bill Clinton took the stage just before 2 p.m. and said he owes the city big time, what with it turning out in big numbers when he ran back in the 1990s.

Shouting out the Villanova men’s basketball team for winning the national championship, he then delved into issues that impact urban areas like Philadelphia and spoke about what makes the country great (the "eds-and-meds" dynamic that figures prominently in the city factored into that explanation).

“I believe we’re just this close to being able to rise,” he said, noting no countries have been able to recover from a recession like that which America faces within 10 years.

It was certainly a message that ran counter to Sanders’ from the night before.

Sanders calls for a “political revolution,” while Bill Clinton maintains the nation remains great as it sits almost all the way back from economic turmoil. Instead of revolution and protests, he said, people should look for positivity in the nation’s world standing.

“My case for Hillary is pretty straightforward,” he said. “She was a great senator for New York on economic issues. She was a great Secretary of State (then alluding to international issues impacting the homeland). She has the best ideas and she’s the best change-maker.”

In an increasingly confrontational campaign, he then attacked Sanders’ free-tuition plan as being tenuous since some states wouldn’t kick in the money they need to make the program work. Hillary Clinton, he said, prioritizes letting people “graduate debt-free.”

“It’s the only proposal by any campaign that will hold down the cost of college,” he claimed.

Moments later, the event veered off script as protestors including Erica Mines shouted Bill Clinton down and held signs reading "Hillary Clinton Is A Murder" and "Black Youth Are Not Super Predators." Their objections stemmed, in part, from the 1994 crime bill that Hillary recently labeled "a mistake."

Though Bill Clinton tried to engage them in discussion "about the increased sentencing provisions" of that bill – "Now wait a minute: I listened to you. You listen to me," he said in an increasingly agitated tone, noting the political compromises inherent in getting that bill to pass in the first place – the pro-Hillary chants echoed off the walls.

"Hillary didn't vote for that bill because she wasn't in the Senate. She was spending her time trying to get health care for poor kids," he said. "I don't know how you would characterize these gang leaders who've got 13-year-old kids hopped up on crack and send them out onto the streets to murder other African American children. [To the protesters] Maybe you thought they were good citizens. She didn't. You are defending the people who kill the lives you say matter. Tell the truth."

The protestors were not asked to leave the gymnasium, though, and held court with reporters who flocked to them after the 33-minute speech wrapped up (video below via Jenny Drumgoole).