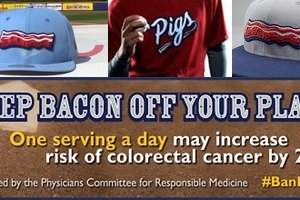 A group of doctor's is going after the Ironpigs' bacon obsession.

A new billboard near Coca-Cola Park, the home of the Phillies' minor-league affiliate, the Lehigh Valley IronPigs, is asking people to keep bacon on the bench.

The advertisement has been paid for by the Physicians' Committee for Responsible Medicine, and it reads "Keep Bacon Off Your Plate. One serving a day may increase risk of colorectal cancer by 21 percent." In addition to the billboard, the group has sent a letter to the team asking that a broccoli character be added to their group of mascots to encourage healthy eating habits among fans.

During every home game, a race between several meat-themed mascots occurs in the 7th inning:

The IronPigs have made meat, and more specifically, bacon, a large part of the way its team is marketed. With bacon-themed jerseys, merchandise, and a variety of pork-centric ballpark food options that includes bacon on a stick, the no-longer-just-for-breakfast meat is nearly the team's unofficial mascot.

That is, of course, in addition to the clubs furry mascot pigs, FeFe and Ferrous, who appear to be at least somewhat concerned about fans' health:

The Physician's Committee, a nonprofit group that's composed of more than 12,000 doctors, says it wants the team to "bench bacon" and add healthier foods to the ballpark concessions. In a news release, Physicians Committee dietitian Cameron Wells, M.P.H., R.D, said bacon can have adverse effects on your health, using cliche baseball language of course.

“Consuming just one serving of bacon a day can dramatically increase the risk for colorectal cancer, heart disease and diabetes. This baseball season, don’t let bacon strike you out.”

The response from the team to adding a broccoli mascot has been a resounding no:

The team's president and general manager, Kurt Landes, told Philly.com that there are a variety of healthy alternatives already available at Coca-Cola Park, and that the baseball experience is supposed to be a mini-vacation of sorts where fans can indulge themselves.

This isn't the first time the group has gone after the IronPigs. It put up a similar billboard last season, which compared bacon to cigarettes.

"@mcall: Group wants IronPigs to ban the bacon. http://t.co/ChqZXNbwhX pic.twitter.com/kDZoWqFE6M" Bad for them. Good for pigs.

According to WebMD, bacon should be consumed infrequently, and should always be balanced with fruits or vegetables.