Billie Eilish gets schooled by Woody Harrelson in SNL promo

Colin Jost and Michael Che, a.k.a "the jocks," try to bully her, but don't worry, they're pretty bad at it 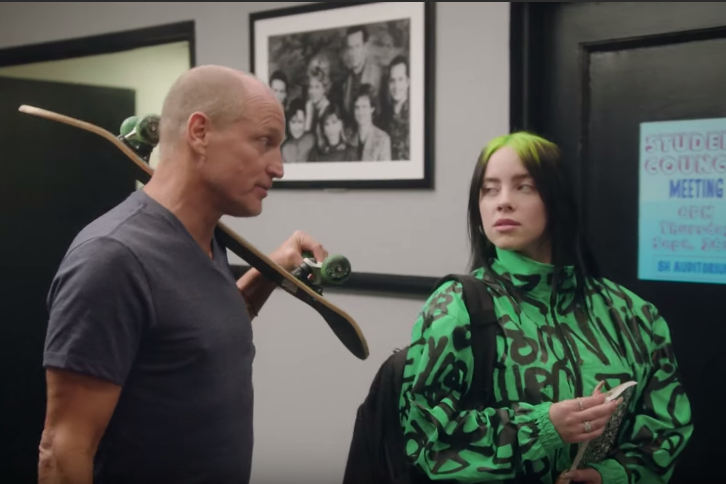 The teaser for the first 'Saturday Night Live' episode of the 45th season showcases hosts Woody Harrelson and Billie Eilish. You could say Harrelson, who hosted three times prior, is a bit of a pro now. Taking the 'Bad Guy' singer under his wing, he shows her around.

"Saturday Night Live" returns this Saturday after a long summer off with host Woody Harrelson and musical guest Billie Eilish, and it looks like the two stars are ready to rule the school in a new promo for the season premiere.

The teaser for the first episode of the 45th season has Eilish, an 'SNL' first-timer, meet up with host Harrelson, a veteran that's hosted three times before in 1989, 1992, and 2014, for a little introduction to the show.

He's been around the block, you see. He even knows the "new kid Jason," a.k.a. Kenan Thompson who's been on the show for 16 years. They bump into Heidi Gardner, who has been promoted from featured player to full-fledged cast member this season, and she's running for SNL class president.

Meanwhile, "the jocks," Colin Jost and Michael Che, are ready to make life hard for Eilish, but Jost isn't exactly a pro when it comes to knocking things out of people's hands, apparently. Then, of course, there's Melissa Villaseñor, the drama club junkie, who's definitely not going to get the starring role as host on Saturday's show, but don't worry, she's not bitter about it or anything.

This season the sketch comedy show will feature Emmy-award winning Phoebe Waller-Bridge with Taylor Swift on Oct. 5, and David Harbour of "Stranger Things" fame with Camila Cabello on Oct. 12. Kristen Stewart will return to the show on Nov. 2, and Eddie Murphy, who hasn't hosted since 1984, will host the Christmas episode on Dec. 21.

Recently, "Saturday Night Live" faced controversy after hiring Pennsylvania native Shane Gillis to join the cast. Videos surfaced after the announcement showing the comedian, who lived in Philly for a time, using racist language. He was fired from SNL four days later..