Nearly everybody read the Bulletin ... and Peter Binzen

The newsman, 93 and retired, remembers the heyday of the storied Philadelphia newspaper 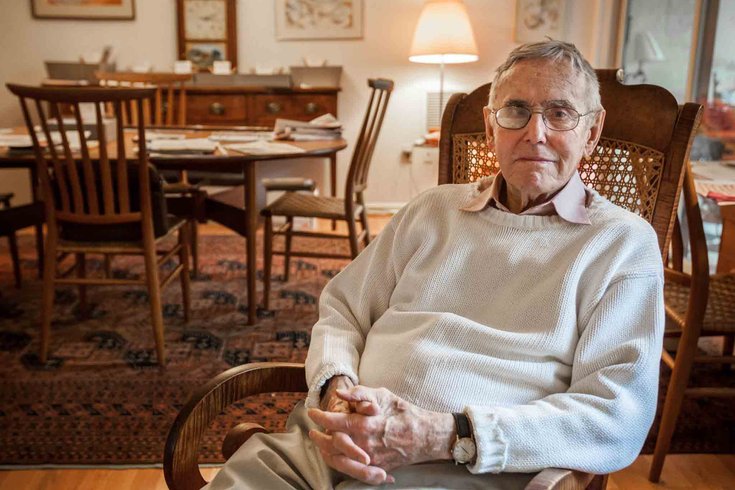 When Peter Binzen moved to Philadelphia in 1951, he was unimpressed. A North Jersey boy, he was more accustomed to New York City. Across the Delaware River he found that there wasn’t a single worthwhile restaurant downtown, the hotels were inferior, and the less said about the drinking water the better.

“You know there used to be a saying that Philadelphia back then was duller than seven Sundays in Flatbush,” the 93-year old newsman recalled. Reflecting on the recent ascendancy of both Brooklyn and Philly he smiles and says, “I guess none of that is true anymore.”

A lot of things have changed in the intervening 64 years. The newspaper Binzen first wrote for, the Philadelphia Bulletin, went out of business in 1982. The school system he covered so closely in the 1950s and 1960s is a shadow of its former self, wracked by budget cuts and transformed by the latest policy trends. (“I don’t know what to think of charter schools, they came after my time.”) The towering mid-20th century political figures Binzen wrote books about -- Frank Rizzo and Richardson Dilworth -- are long dead.

One of the city’s most distinguished mid-century journalists, and biographer of two of Philadelphia’s iconic mayors, Binzen now lives in a bucolic retirement home in Bryn Mawr. He is still in touch with a few old collaborators and competitors, including former editor Gene Roberts, who transformed the Inquirer into “a first-rate paper” and dethroned the Bulletin. Today, Binzen occasionally writes for his retirement home’s newsletter and ventures forth for lectures on his most recent book, Richardson Dilworth: Last of the Bare-Knuckled Aristocrats. He lives in the same apartment building as Dilworth’s daughter, Deborah, and they often dine together in the evenings.

In 1950, Binzen had no intention of moving to Philadelphia. During World War II he fought in Italy, his division spearheading the final Allied advance across the Po Valley. Afterward he finished his interrupted undergraduate career at Yale. He contemplated becoming a lawyer, but decided to try journalism instead. At his first interview, for United Press (later to become UPI), the man interviewing him, Bill Dickinson, asked Binzen if he was just a dilettante, dabbling in newspapers while figuring out something more lucrative to do.

“I barely knew what the word meant, but I’ve spent my life trying to prove I’m not a dilettante,” he said. 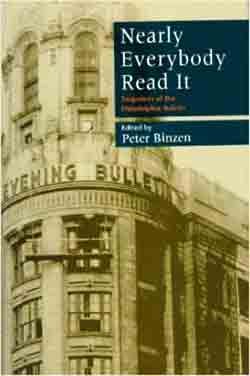 After kicking around various small North Jersey papers, and spending a year freelancing in Paris, he got word from Dickinson. The older man had moved to the Bulletin, then the largest evening newspaper in the nation. There was plenty of work and he asked Binzen to join him. The Bulletin was a hyperlocal paper, with only one foreign correspondent, one reporter in D.C., and two in Harrisburg (when the legislature was in session). But they had reporters covering every neighborhood, the zoning commission, and City Hall. In Nearly Everybody Read It, a collection of essays about the paper, which Binzen contributed to and edited, it is recalled that a popular newsroom joke had it that if World War III broke out, the Bulletin would open its story with the conflict’s effects on Kensington.

“I got the education beat and there wasn’t much competition, no one was covering education,” Binzen said. “The Inquirer had a lady who was 50 — I thought that was old then — and she was covering South Jersey churches and the Philadelphia Board of Education. The Daily News didn’t have anyone. I loved it. I had a scoop three or four days a week, Page One.”

While working at the Bulletin he produced three books, two of them with fellow reporter Joe Daughen. The first was Whitetown, a semi-sociological examination of Fishtown and Kensington and one of the few works to investigate urban working class white neighborhoods during the 1960s and early 1970s. The second, and his first collaboration with Daughen, covered the failure of the Penn Central company.

The third was a muckraking 1977 unauthorized biography, The Cop Who Would Be King: The Honorable Frank Rizzo. The book relays a few tales of the mayor’s heroism on the police force – Binzen interviewed a man Rizzo single-handedly saved from a murderous beating – but on balance it is damning in the extreme. Charges range from Rizzo’s reinvigoration of patronage politics, which wrecked the city’s budget, to a siege of the Inquirer building by the mayor’s supporters when an unflattering column was penned about him.

“I was metro editor when the book came out and on publication day a cop walked into the newsroom representing Rizzo,” Binzen said. “He handed me something and said, ‘If there are any errors in that book we are going to sue your ass.’ I never heard a word from Rizzo after that.”

Binzen and Dilworth enjoyed an entirely different kind of relationship. As an education reporter, he met the former mayor after he had taken over the school board during the tumultuous years of the 1960s. In 1972 Binzen conducted six two-hour interviews with Dilworth, who spoke very candidly. He even revealed his lifelong weakness for a strong drink. (In one particularly colorful anecdote, Dilworth recalled vomiting on Andrew Mellon’s daughter at her coming-out ball.) But Binzen’s publisher considered Dilworth to be an overly parochial figure and the book was put on hold – for 40 years.

With the help of his son Jonathan, and local publisher Camino Books, Binzen finally got his Dilworth biography published last year. At a recent reading at the Athenaeum, marble busts gazing down at the packed house, Binzen reflected on Dilworth’s verbal fusillades (which prompted one opponent to call him “crazy as a bedbug — with apologies to the bedbug”) and how TV news “took away the Bulletin’s pizzazz.”

Binzen concluded by recalling Dilworth’s belief in the potential of downtown and its adjoining neighborhoods. “He was a defender of Center City, which is jumping today as it has never jumped before,” he told the audience. But as the city’s star rises, Binzen’s other old love is slowly dying. Back home in his apartment, he mourns the end of daily newspapers, though he still reads the New York Times and the now much-reduced Philadelphia Inquirer. (Binzen is disconnected from the Internet and does not use a computer.)

“I was just so fortunate to be in the business when people just couldn’t wait to get their hands on the Evening Bulletin,” Binzen said.