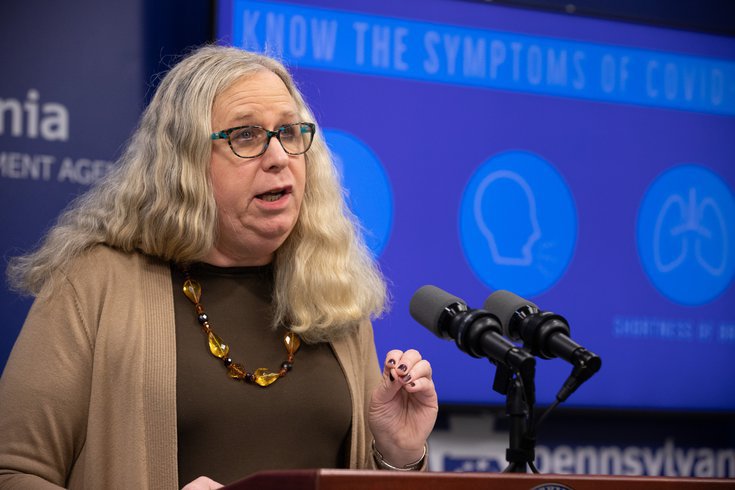 The Bloomsburg Fair is backpedaling after accusations that an attraction at last weekend's carnival was transphobic.

At the center of the controversy is a dunk tank that featured a person dressed in the likeness of Pennsylvania Health Secretary Dr. Rachel Levine, wearing a floral dress and a blonde wig. Levine is a transgender woman who has faced disparaging remarks as a highly visible member of Gov. Tom Wolf's administration during the COVID-19 crisis.

The Bloomsburg Fair's Facebook page circulated photos of the dunk tank and the person wearing the dress and wig after Saturday's carnival. The fair's Facebook post, which has since been deleted, directly referenced Levine. Proceeds from the dunk tank raised money for fire departments in the Columbia and Montour county area.

Was already thinking it probably wouldn’t be a good idea to go to the fair this year. Now I’m definitely out. How...

The Facebook post prompted a swift backlash from LGBTQ+ advocates, who denounced the game as transphobic. Among the critics were Pennsylvania state Rep. Brian Sims, of Philadelphia, who wrote that he was "disgusted" by the game and the fair's subsequent promotion of it.

BLOOMSBURG: As an extremely proud Bloomsburg University of Pennsylvania alum, and as someone who truly loves Bloomsburg,...

"The Bloomsburg Fair and the fire companies involved owe Dr. Levine and the LGBTQ+ community a massive apology for perpetuating hatred, but also owes us an investigation into how this happened, measurable plans to ensure that it doesn’t happen again, and a track record of accountability that can only he earned by doing right going forward," Sims wrote.

The Bloomsburg Fair responded to the criticism with a lengthy statement that included multiple misspellings of Levine's name. The statement was published by the Times Leader:

On behalf of the Bloomsburg Fair, we are responding to a series of inquiries and comments regarding using the likeness of an individual dressed as Dr. Rachel Lavine in a dunk tank at the Columbia Montour County Fireman’s Relief Carnival. The sole purpose of the dunk tank, which was operated by the Bloomsburg Fair, was to utilize the likeness of a public figure in an effort to raise monies for local fire companies. The fundraising activities of such organizations have been greatly impacted by the COVID-19 pandemic and the governmental restrictions which have been imposed, accordingly, our intention was simply an effort to raise money to assist these organizations. At no time was it the intention of the Bloomsburg Fair, anyone affiliated with the Fair, including any sponsors of the Carnival, to knowingly utilize the likeness of Dr. Lavine in a dunk tank as any form of commentary on Dr. Lavine’s transgender identity. The Bloomsburg Fair and the sponsors of the event do not endorse any comments which arose subsequent to the event which disparage Dr. Lavine’s transgender identity or any other discriminatory comments.

A Pennsylvania Department of Health spokesperson said Levine would not comment on the Bloomsburg Fair incident.

"She remains laser-focused on protecting the health and well-being of Pennsylvanians as we navigate this ongoing pandemic," the spokesperson said.

The incident comes after another controversy in May, when Pittsburgh radio host Marty Griffin, of KDKA-AM, called Levine "sir" at least three times during a coronavirus press briefing. Levine told Griffin his misgendering of her was "insulting," and Griffin claimed he misspoke.

The Bloomsburg Fair previously came under fire in 2016 when a vendor was seen selling Nazi and Confederate flags and memorabilia. Former Fair President Paul Reichart said he had been unaware of the vendor, who was expelled only after it was discovered he was a registered sex offender.

Levine, who has been at the forefront of Pennsylvania's coronavirus response, has often been the focal point of criticism for those pushing to lift the state's economic and social restrictions.

The Pennsylvania Commission on LGBTQ Affairs addressed the issue of transphobia in a statement last month.

"In times of crisis and pain, LGBTQ individuals are united in pushing back against transphobia of any kind," the commission wrote, expressing support for Levine. "Members of the commission believe that the health and safety of Pennsylvanians should not be undermined due to these toxic and personal attacks."

Gov. Wolf, when asked about Levine, has consistently defended her performance.

"My assessment of Dr. Levine is that she is doing a phenomenal job, and I think we’ve got to be careful about blaming the messenger for the message," Wolf said in May.