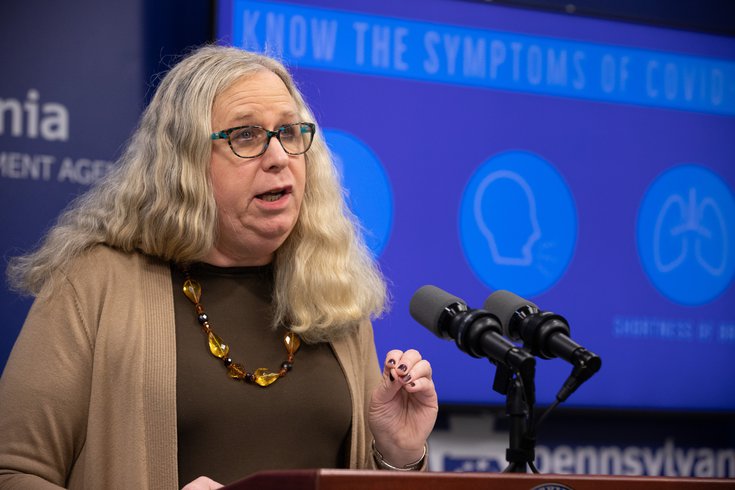 The Office of Governor Tom Wolf/flickr.com/governortomwolf

Dr. Rachel Levine, secretary of the Pennsylvania Department of Health, stopped a Pittsburgh reporter during a virtual press briefing this week after he repeatedly called her "sir." Levine then told KDKA-AM radio host Marty Griffin it was insulting for him to misgender a transgender woman.

The incident took place Tuesday afternoon as Griffin, host of "The Voice of Pittsburgh," asked Levine a question about the state's reopening plans amid the COVID-19 crisis.

A transcript of the exchange was published by the Pittsburgh City Paper:

GRIFFIN: When folks know what yellow is kind of sort of but they don't even know what green is because you don't. What's the end game, sir? Where do we get to the point where folks can be confident they can conduct business if they do it safely and there's no time frame and there's no window? Correct me if I'm wrong, sir ... ma'am.

GRIFFIN: How do you respond, doctor, to the conjecture that your response is jeopardizing the health and well being of seniors by moving them into nursing facilities even if they're no longer COVID positive, sir?

LEVINE: So please don't misgender me.

Levine, 62, has been in the spotlight throughout the public health crisis. She delivers daily updates and makes critical decisions regarding Pennsylvania's response to the coronavirus pandemic. In 2015, Levine became the first transgender person appointed to a Pennsylvania cabinet position when she accepted the role of physician general. Two years later, she was appointed secretary of the Department of Health.

Griffin is an experienced and award-winning reporter with a background in investigative journalism. His bio with KDKA-TV says he's "here to stir things up" in his hometown of Pittsburgh. On Tuesday, Griffin called Levine "sir" at least three times during the press briefing. He later apologized again on Twitter, claiming the incident happened because he was preoccupied rather than rude.

I apologize. I apologized twice. I truly did. It was not intentional. It was not. I was not focused. I was doing six things at once. https://t.co/cdBO9r1iF8

A Pittsburgh-based blog, 2 Political Junkies, has since pointed out that this isn't the first time Griffin misgendered a transgender person. In 2014, Griffin repeatedly referred to the former soldier and whistleblower Chelsea Manning as "Mr. Bradley," saying "he" when discussing Manning, whose birth name was Bradley.

In response to this week's incident, Pittsburgh Mayor Bill Peduto canceled an interview with KDKA-AM. The station was previously embroiled in controversy when another host, Wendy Bell, questioned whether the economic restrictions were worth it to "save less than 1% of our population” from COVID-19.

Cancelled interview w/ Lynne Hayes-Freeland for tomorrow. Not upset w/her, she’s always been a fair, strong journalist. But will not support @KDKARadio behavior. Growing up, KDKA had good people who made us proud to be from Pittsburgh. Now, it shock-jocks, sensationalism & worse.

Levine, a Harvard graduate, has been criticized in recent weeks as tension mounts over Pennsylvania's plan to reopen. State Sen. Doug Mastriano called for her resignation on Monday based on the state's handling of nursing homes during the coronavirus crisis. Levine unveiled plans Tuesday for universal COVID-19 testing of residents at Pennsylvania nursing homes.

On Thursday, Levine was further scrutinized for the decision to remove her 95-year-old mother from a personal-care home, which is in a different legal category than the state's nursing homes and assisted living facilities. Many Pennsylvania families have struggled to navigate the care of their elderly family members in nursing homes during the crisis.

“My assessment of Dr. Levine is that she is doing a phenomenal job, and I think we’ve got to be careful about blaming the messenger for the message,” Wolf said.

Disparaging comments about Levine in recent weeks have rallied her supporters around her on social media with a Facebook fanclub and a #RespectforRachel hashtag.

Just wanted to spread more love and gratitude for PA Secretary of Health @SecretaryLevine for her excellent work, clarity, and calm during this challenging time #RespectForRachel
💛💛💛💛💛💛💛💛💛💛💛💛💛

.@SecretaryLevine, who is a trans woman, is the health official leading the charge in the fight against COVID-19 in Pennsylvania. Read her interview with @WashBlade: https://t.co/patJIp0lfS
#RespectForRachel pic.twitter.com/fHgHKrnbyy

So grateful we have strong, reasoned leadership in PA. My #RespectForRachel is profound! https://t.co/OYZcMxytS3