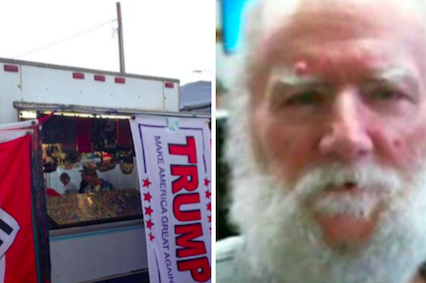 Photo of offensive stand at 2016 Bloomsburg Fair (L) and 72-year-old vendor Lawrence Betsinger, who was expelled from the week-long event on Monday, September 26.

The organizers of Pennsylvania's 161st annual Bloomsburg Fair expelled a vendor on Monday whose stand was decorated with flags representing the Nazi Germany and Republican presidential candidate Donald Trump.

Over the weekend, photos of the booth and the flags were circulated on social media after Facebook user Chloe Winters expressed shock in a post that has since been removed by the company for violating the site's Community Standards.

"Okay so after a lot of thought and apprehension I finally decided to post this," Winters wrote. "I was absolutely shocked and appalled when I saw this Nazi flag hanging at the Bloomsburg Fair yesterday," Winters wrote on Facebook. "This flag represents the brutal and horrific genocide of innocent people. It stands for the hatred and destruction of a religion I feel blessed to be a part of. It's 2016 and the world is still full of SO MUCH hate. When is it going to end? I'm sad to say that I'll never go to the Bloomsburg Fair again, but it looks like I'm not wanted there anyway."

The fair vendor, identified as 72-year-old Lawrence Betsinger, had been selling Nazi, Confederate, Trump and anti-Hillary flags along with other hate-inspired memorabilia at the week-long festival, which attracts several hundred thousand people each year.

"We were initially unaware of the flag and other merchandise being displayed by a vendor on our fairgrounds. Most posts were made after midnight, and as soon as we were made aware of it early this morning, we took the appropriate action with the vendor to remove those items. Unfortunately, we have over 1200 vendors on our fairgrounds and it’s difficult to monitor each one individually. Whenever someone brings something like this to our attention, we always discuss it with the vendor and take any steps to maintain a family-fun atmosphere at our fair."

When it was later discovered that Betsinger is a registered sex offender with a profile on the Megan's Law website, Reichert issued a follow-up statement.

Betsinger, a Tier 2 sex offender, was registered on Megan's Law in April 2008 for a primary offense of Obscene and Sexual Materials and Performance.

The Bloomsburg Fair will continue through October 1.