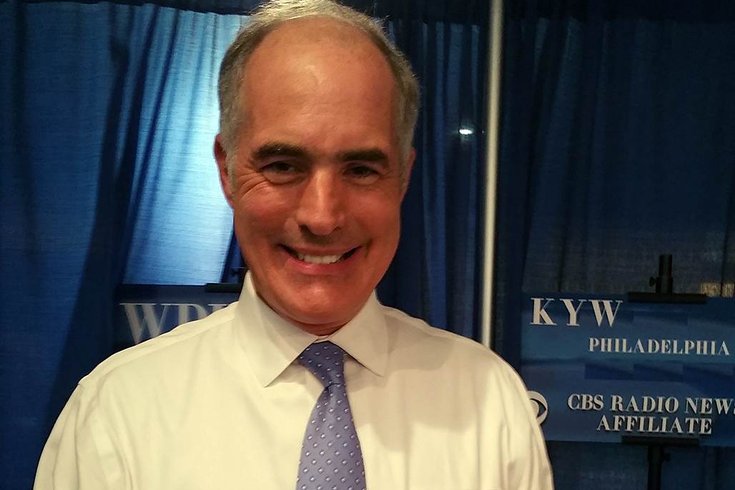 Bob Casey Jr. didn’t feel right in the suit jacket. The Wells Fargo Center was stuffy, and the congestion of Radio Row on Thursday night, the final day of the Democratic National Convention in Philadelphia, didn’t help.

So the two-term U.S. senator from Pennsylvania went with the natural look. The roll-up-your-sleeves-and-get-ready-to-work look.

All Casey was missing was a hardhat on his head and a jackhammer in hand.

Because Casey knows the work ahead — especially in Pennsylvania — that will need to get done over the next three months if Hillary Clinton is going to take history even further as the first female president of the United States.

“We know Pennsylvania will be decisive, but if you’re pinpointing a region that will be not just significant but decisive in the state, it would be southeastern Pennsylvania.” – Pennsylvania U.S. Sen. Bob Casey Jr.

According to POLITICO and the Wall Street Journal, Pennsylvania is one of the four most prized states in the November election, along with Ohio, Florida and Virginia.

“I plan on doing as much campaigning throughout the state [as the Democratic Party] needs," he said. "I even offered to drive the bus, but I think they should probably get a professional driver.”

George H.W. Bush was the last Republican to win Pennsylvania, in 1988 — six elections and 28 years ago. Since then, the Keystone State has been a blue state. President Barack Obama won the state in 2008 over John McCain by a 10.3-point margin of victory, in a year when Clinton beat Obama in Pennsylvania by 10 points in the Democratic primary in April 2008. Mitt Romney closed that gap to 6 percent when he ran against Obama in 2012. (See chart below.)

Pennsylvania is not a lock for Clinton, however.

“I think we’re going to have to do a lot of work in parts of the southwestern and northeastern Pennsylvania,” Casey said. “But it’s still very early. The good news is that having the convention play out in July gives us a lot of time to work on those areas.”

Clinton does need help. Some of that could come from softening diehard Bernie Sanders supporters eventually giving up their vote. And there are many Republicans who feel disenfranchised by Donald Trump’s nomination that Clinton could sway.

But can Clinton pull them into the fold?

“I think it’s mostly going to be about economic issues and focusing on raising income for the middle class, focusing on providing incentives for companies to keep jobs here,” Casey said. “I think we’re also going to need to develop a long-term strategy for kids to learn when they’re young, so they can earn more later in the workforce. She understands that.

“I think her plan for the country is tailored very much to our state. That’s good. It’s going to be a campaign of economic security and national security.”

Casey said he hasn’t had a chance yet to speak directly to Clinton at the DNC. But you sense the two will be conversing quite often in the next three months.

“We know Pennsylvania will be decisive, but if you’re pinpointing a region that will be not just significant but decisive in the state, it would be southeastern Pennsylvania,” Casey said. “About a third of the vote will come from just five counties, Philadelphia, and the four surrounding counties, Montgomery, Chester, Bucks and Delaware.

“That has to be an area where she and her team, working with us, will have to get vote in the city and the suburbs. But I think [they] are well prepared to do that.”

It will be difficult to ignore that during the Obama Administration white family poverty has increased in the United States along with serious degrading of household income for African-American families.

How will Clinton sell economic stability to Pennsylvania voters?

“There’s a lot of work left, but we’re not in the position we were when President Obama inherited an economy that was in the ditch, like no economy that anyone could remember,” Casey said. “We were losing 700,000, 800,000 jobs month after month after month in late 2008 and the first couple of months of his presidency.

“So since then, there’s been 14 million jobs created, almost 15 million. The deficit was cut by a trillion dollars, two-thirds, and 20 million people have healthcare. We have to build on that progress," the senator from Scranton said. "But the long-term challenge we have, and Hillary identified that early in the campaign, was raising wages for hard-working middleclass families. That’s a huge problem. It’s not going to happen with one bill.

“It is generational, but she’s highlighted it as a major issue. Donald Trump has no plans of raising anyone’s income, except for the super-rich.”

Clinton suffers from an image problem, there is no doubt. Some feel she is cold and untrusting, a cog in the political machine that knows when to put on a smile.

“This convention gives people to see her, see her up close, hear from her, and hear from others who have known her her whole life,” Casey said. “Not only President [Bill] Clinton, but people like that. This convention could go a long way to strengthening her position.”

U.S. Senator Ed Markey from Massachusetts stood near Casey, listening, then nodding his head in agreement of his sentiments.

“I think after this convention, there’s going to be a severe momentum shift,” Markey said. “It’s obvious Hillary is the complete package and we’ll see another Trump stumble of the day. I think as each day goes by and the pressure builds, we’re going to see the sharp contrast between the vile little personality, temperament and policies of Donald Trump, and the steady, solid, long-term vision that Hillary Clinton has for the country.”