Booker: 'No rush to impeachment' of President Trump 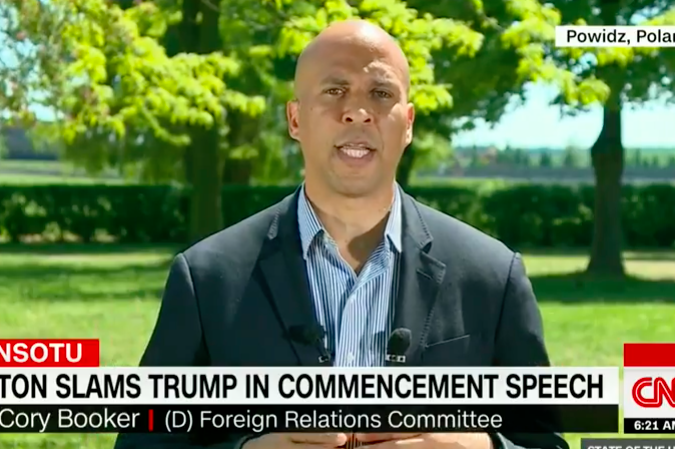 New Jersey Sen. Cory Booker has been a sharp critic of Donald Trump during the turbulent early months of his presidency, but does the potential Democratic hopeful in 2020 believe the wheels should be set in motion for impeachment?

Appearing Sunday morning on CNN's "State of the Union," Booker fielded a series of questions about President Trump's nine-day trip through the Middle and Europe, the ongoing saga of the Russia investigation and comments made by Hillary Clinton during her commencement address at Wellesley College on Saturday.

Suggesting that President Trump is "starting a very bad pattern," the newcomer to the Senate Foreign Relations Committee lamented that there were missed opportunities for the president to reassure world leaders of America's commitment to shared goals. Booker singled out human rights issues in Europe and the Middle East, as well as Trump's failure to address climate change.

"It's almost like reducing America from it's light and hope that it presents to the world to just a utilitarian, kind of transactional relationship," Booker said.

On the Russia investigation, Booker was asked about Friday's revelation by the Washington Post that Trump aide and son-in-law Jared Kushner suggested setting up a secret communications channel with Russian with the Kremlin during the presidential transition.

"You have Republicans and Democrats coming out and saying, 'Hey wait a minute, that's very problematic,'" Booker said. "We need to get to the bottom of what was going on."

In March, news broke that Kushner, who has increasingly been in the investigation's spotlight, held "relationship meetings" with Russian Ambassador Sergei Kislyak and banker Sergey Gorkov to discuss the issue of sanctions. Members of the Democratic National Committee have called for Kushner's security clearance to be suspended.

The discussion ultimately turned to Hillary Clinton's commencement speech at her alma mater, where she hearkened back to campus outrage over the "disgrace" of the Nixon administration prior to his resignation in the face of impeachment in 1974.

"I'm not going to rush to impeachment," Booker said. "I think we need to deal with this in a very sobered way. This can't be a relitigation of an election that is now past. This has to be about an objective assessment about the facts that are going on right now."