Boy with terminal illness dies in the arms of Santa Claus 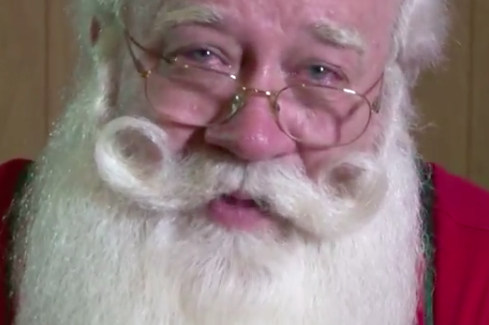 Eric Schmitt-Matzen tells the heartbreaking story of his visit to a Knoxville hospital.

A terminally ill boy who was more concerned about missing Christmas than dying got his final wish recently when he died in the arms of a caring Santa Claus who visited him at a Tennessee hospital.

Eric Schmitt-Matzen, the man in the red and white, told his emotional story this week to Knoxville NBC affiliate WBIR, lamenting the 5-year-old child's passing. While his job typically is filled with the joy of the holidays, he said heartbreaking stories like the sick boy do account about 2 percent of his work.

The boy, whose name and illness were not identified, had asked if there was any way he would still be able to experience the holiday this year. That's when Schmitt-Matzen, an Army veteran, took the call and agreed to bring some light to the child's last days.

"You're not going to miss Christmas," Schmitt-Matzen said he told the boy. "The elves already had your present; we knew you wanted this for a long time."

At that point, Schmitt-Matzen gave the child a PAW Patrol toy his mother had purchased for him, bringing a smile to his face. With a hug, the boy asked Schmitt-Matzen if there was any way he could help him. Moments later, he died.

In the time since the visit, Schmitt-Matzen has gotten more than 3,000 friend requests on Facebook. The experience, he said, left him "bawling his head off" but reassured that his role carries importance for children in need.