'Andrew Wyeth: In Retrospect' is the first career retrospective since the artist’s death in 2009 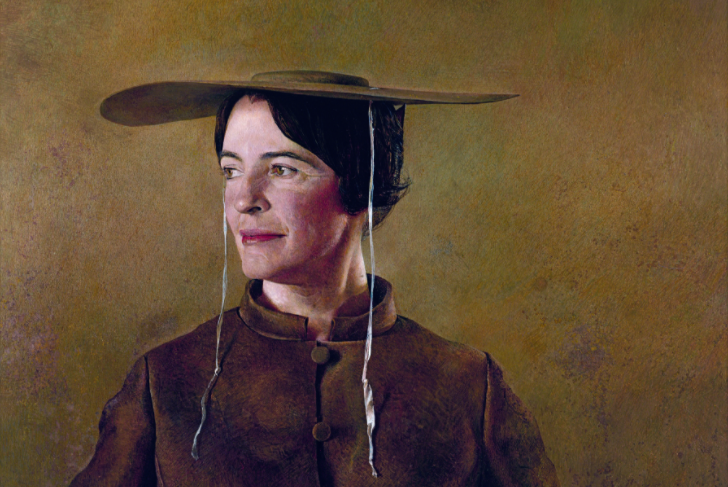 By its very existence, the Brandywine River Museum of Art offers an immersive experience for visitors interested in the art of Andrew Wyeth. Its location in Chadds Ford places it in the middle of one of two landscapes that Wyeth painted obsessively over the course of his long career (the other was in coastal Maine). The museum also maintains and allows visitors access to Wyeth’s studio; the house and studio of his father, artist N.C. Wyeth; and the Kuerner Farm, the rustic farm that served as inspiration for more than seven decades.

For the next three months, though, beginning Saturday, the experience will be even more intensive as the Brandywine hosts “Andrew Wyeth: In Retrospect,” a major overview of the artist’s life and career that coincides with his centennial. The show features over 100 works spanning Wyeth’s career, from his early watercolors to his aptly-named final painting, “Goodbye,” completed shortly before his death in 2009.

“This is the largest exhibition that we’ve organized in the Brandywine’s history,” museum director Thomas Padon said during a tour of the exhibition. 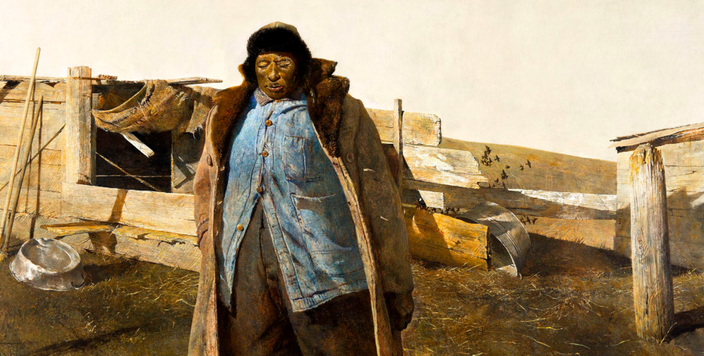 “Andrew Wyeth is such an important figure here. He’s not only one of the most iconic American artists, but he was a beloved member of this community and the fact that you can see the landscape in many of these paintings gives visitors a real sense of depth and a unique insight into this artist’s work.”


While the exhibition itself is wide-ranging, Wyeth’s subjects never were. Seen side by side, the repeated depictions of the same subjects and places over the span of decades is fascinating, both in the way that the artist’s style evolves and in the unparalleled opportunity to see the passage of time in watercolor and tempera. Though Wyeth’s most famous work, “Christina’s World,” isn’t there (it’s in the collection of the Museum of Modern Art in New York and couldn’t be borrowed), its subject, Christina Olson, is – multiple times.

Even more prevalent throughout the show is Kuerner’s Farm and its inhabitants, Karl and Anna Kuerner, usually depicted as stoic and hard-working characters set against a stark, bleak landscape. He also drew on a local African-American community centered around nearby Mother Archies Church.

“He became very immersed in the lives of these people and in portraying them,” said curator Audrey Lewis.

“He wanted to capture their being and also the land itself, where they lived.”

Epitomized by the divisive “Christina’s World,” Wyeth’s work has long been controversial – always popular with mass audiences, but the subject of heated debates in the art world. There are those who acclaim him as one of the great American artists, while others dismiss him as a folksy sentimentalist. The contrarian notion arose particularly strongly in the late ‘60s, when Wyeth’s farmhouse scenes looked outdated next to the wild, new creations of the Abstract Expressionists. 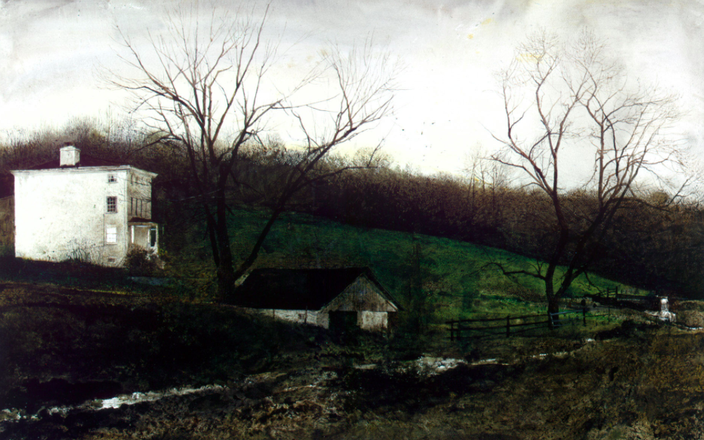 “The critics had been particularly tough on him in the late ‘60s when his work was shown at a hugely popular exhibition at the Whitney Museum of Art,” Lewis explained, pointing to a new series of nudes that Wyeth began shortly thereafter.

“Those paintings may have been partly motivated by that criticism, to get away from the idea that he’s a safe, sentimental painter.”

Collected together, such an interpretation seems misguided. A definite air of melancholy hangs over the exhibition, which gathers room after room of paintings whose muted colors suggest isolation and loneliness and whose subject matter continually evokes hardship and death, perhaps the lingering effect of the car accident that prematurely took the lives of his father and nephew. But the aggregated images of the same faces and rooms also reveal the artist’s profound empathy and gift for metaphorical transformations of realistic terrain.

“Wyeth never considered himself a complete realist,” Lewis pointed out. “He tried to go beyond reality in his work.”