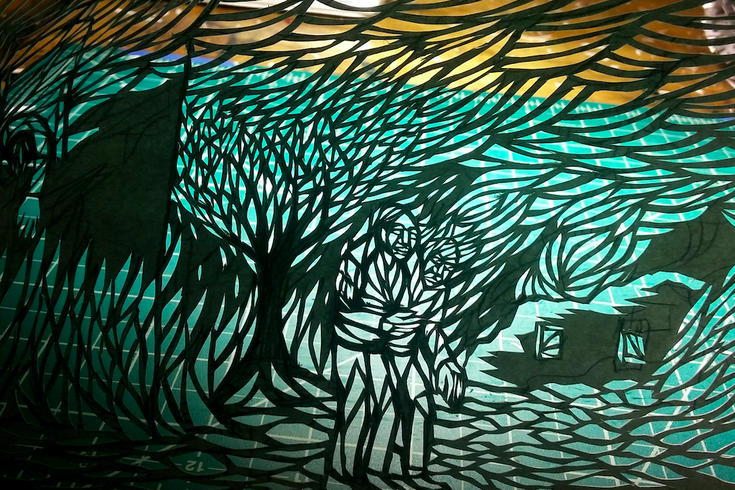 An artist is only limited by their imagination and the borders of their canvas – so what happens when you take one of those constraints away?

That’s essentially what happened when Erik Ruin was handed a thousand-foot roll of paper – which, for someone who works on the intimate scale and intensity of detail that Ruin does, is for all intents and purposes, limitless.

Stark, intricate and wondrous – Ruin’s paper-cut art combines the enthralling fantasy of a storybook with the prismatic, fragmented beauty of a stained-glass window. Projected, it becomes a shadow world that draws viewers in with both the blunt force of a propaganda poster and the delicate mystery of a fairy tale. In his live performances, accompanied by the rotating cast of musicians he calls the Ominous Cloud Ensemble, the West Philly-based artist brings his images to life as a succession of images beamed out from an overhead projector. 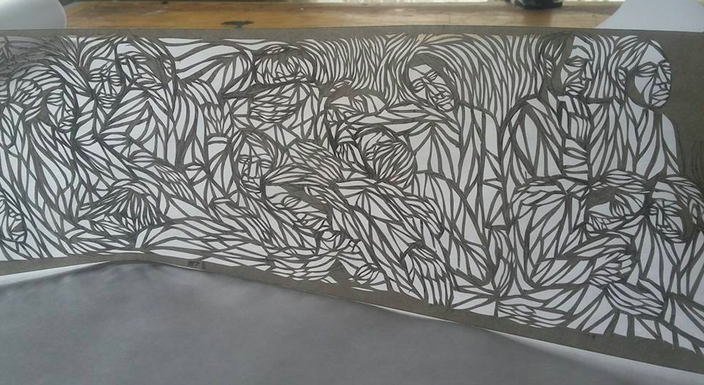 With “Long/Gone,” which he’ll premiere on Friday at the Rotunda with the ensemble, Ruin will unspool more than a hundred feet of continuous silhouette imagery, a painstaking project which he’s been working diligently away at for the last several years.

“I was really interested in something that would very slowly change,” Ruin says.

“I started the first few feet cutting out some ocean shapes to see where that went, and I immediately started evolving it, adding islands and people – then I said, ‘No, you’ve got all the time in the world’ – all the length in the world, really – so I decided that the first six feet of it would be purely waves.”

That wave imagery seems appropriate to the way “Long/Gone” began to develop. The seemingly unending roll allowed Ruin to draw and cut in a pure stream of consciousness, allowing one image to suggest another, gradually, with narratives emerging and being subsumed like picaresque tides of storytelling. The fluid narratives took on an air of the mythic as the scroll progressed, folding in classic stories from Homer’s Odyssey and Dante’s Inferno. 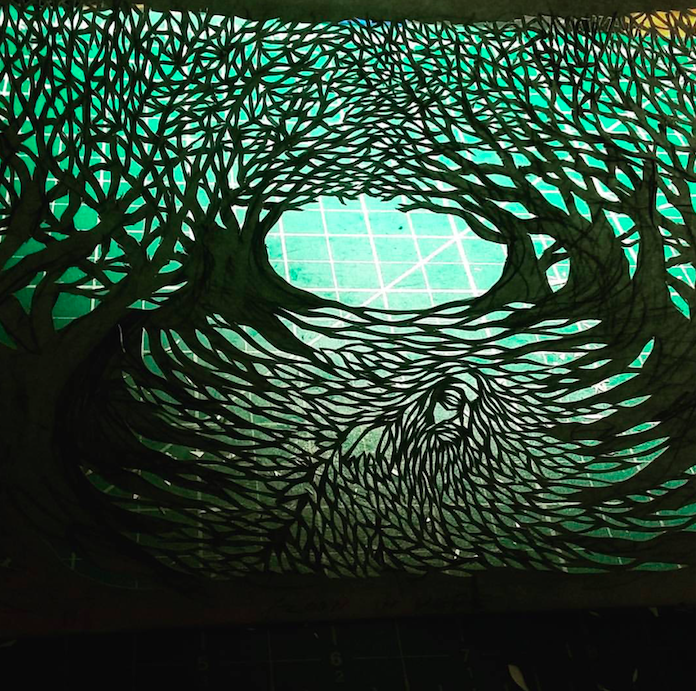 The process transplanted the improvisatory nature of Ruin’s Ominous Cloud Ensemble collaborations from the performance to the creation – resulting in a more composed piece of music to accompany the piece. The nine-piece ensemble brings together an eclectic crew of musicians from Philly’s jazz, experimental music and rock scenes, including members of the Sun Ra Arkestra, Fern Knight and Chris Forsyth’s Solar Motel Band.


“In most performances, I’m interested in this tension between the image and the sound,” he explains, “whereas, here, it’s much more in the realm of accompaniment and trying to bring forth subtleties of mood within the image.”

Ruin’s work can also be currently seen at Eastern State Penitentiary, which is hosting an installation called “Hakim’s Tale,” culled from the performance piece “Prisoner’s Song” that Ruin created with songwriter Gelsey Bell. The piece features the projected portrait of formerly incarcerated activist Hakim Ali along with his recorded memories of being placed in solitary confinement.

The installation reflects the more activist side of Ruin’s work, which he says is less prominent in “Long/Gone” – though not entirely absent.

“I’m someone who’s deeply concerned with the world and I think that comes through in the work that I make. I think it comes through here, but in a more general imbuing of compassion into the work. In some ways working on something like ‘Long/Gone’ is nurturing that other part of myself that endures outside of the events of the day.”

At only a tenth of the full paper roll, “Long/Gone” could continue to evolve indefinitely. It currently takes roughly an hour to unfold in performance, which may indicate the proper length to scissor it off from the remainder of the roll – though Ruin hasn’t gone through with that yet.

“There’s part of me that just wants to work on this for the rest of my life because it’s deeply satisfying,” he says.

“But at some point, I’d like to do other things too.”