Breastfeeding in public: Unimaginable, until my baby became hungry in a Jiffy Lube waiting room 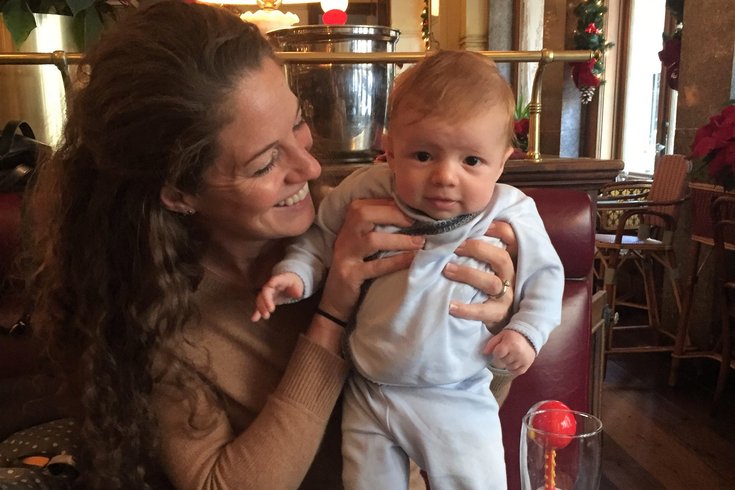 Katie and her son, Killian, are all smiles after she nursed him during lunch at Parc Restaurant on Rittenhouse Square in Center City Philadelphia.

I have shared how much I love breastfeeding but for the first couple months of my son’s life I harbored a secret fear about breastfeeding in public. Nursing my child in front of strangers was something I thought I would never do because I did not want to bare my breasts in public. Not that there’s anything wrong with it. I am not upset if I see a woman nursing her child; in fact I don’t bat an eyelash. I am a supporter of the Free the Nipple movement. I spent a lot of time topless on Grecian beaches during my honeymoon. So why was I intimidated to nurse my baby boy in public?

In America, a woman who exposes her breasts is considered tawdry, scandalous, slutty and everything else in between. We can debate at another time as to whether or not this is justified, but I think everyone can agree that there is a difference between bare breasts for the sake of comfort or sexuality and baring breasts for the feeding and nourishment of babies. There are many stories about the latter, in which nursing mothers are reprimanded or condemned for breastfeeding in public. I have always been appalled by these accounts as I believe that a woman has the right to feed her child wherever necessary. But I did not think that I would ever nurse in public. That was, until my baby boy became hungry in the waiting room of a Jiffy Lube.

I considered going into the rest room to feed Killian as my Jeep was being serviced. Would I sit on the toilet to nurse him? No. Sit on the floor? Ew. Even though this Jiffy Lube was pretty clean, I just could not bring my infant into the bathroom. So I sat right where I was, in a crowded lobby with floor-to- ceiling windows and fed my two month old infant.

Even though this was the first time I nursed in public, I was prepared thanks to gifts from a friend and aunt. In my diaper bag I keep two nursing covers that assist in making breastfeeding more discreet (a regular shawl or scarf works just as well). A nursing cover is helpful but it is not fool proof, especially when you have a fussy, hungry baby in your arms. I may have exposed my breast to the waiting room as Killian was latching on, but it was of no concern to me and thankfully to none of those around me.

That first time breastfeeding in public I had a choice to make: would I find a way to feed my precious baby boy in a public space or would I make him wait until I obtained privacy? Any mother who has been in this situation knows that there really is no choice. When your child is hungry, you feed him no matter what.

Fortunately for us nursing mothers, the law is on our side. In Pennsylvania , state lawmakers have said, “Breastfeeding a baby is an important and basic act of nurturing that must be protected in the interests of maternal and child health and family values.” The law in the Commonwealth states, “A mother shall be permitted to breastfeed her child in any location, public or private, where the mother and child are otherwise authorized to be present, irrespective of whether or not the mother’s breast is covered during or incidental to the breastfeeding.” In New Jersey , where I live, the law states, “A mother shall be entitled to breast feed her baby in any location of a place of public accommodation, resort or amusement wherein the mother is otherwise permitted.”

I hope that I never have to deal with the public shaming that many breastfeeding mothers have had to endure but if it ever happens to me I am glad to know that my rights as a nursing woman are protected.

My first time nursing in public in my old neighborhood in Center City happened recently. As my best friend and I arrived at Parc on Rittenhouse Square for lunch my baby boy was hungry. As soon as we sat down I threw on a nursing cover and fed Killian. I could not help but to glance around, wondering if anyone would say anything or give me a look. Thankfully, they did not. If any of the people around us took issue with my public nursing, I had no indication. As I was breastfeeding, the manager refilled our water glasses with a smile and our waiter was totally ambivalent.

At the end of our meal I thanked him for being so cool with me nursing at the table. He said it was no big deal; he believes mothers should nurse their babies wherever they need to. I am in total agreement. And thankfully now completely comfortable.

What has been your experience breastfeeding in public? Were you ever chastised or asked to leave? I want to hear from you! Share in the comments below or Tweet me at @ThePhillyVoice and @KathleenEGagnon.