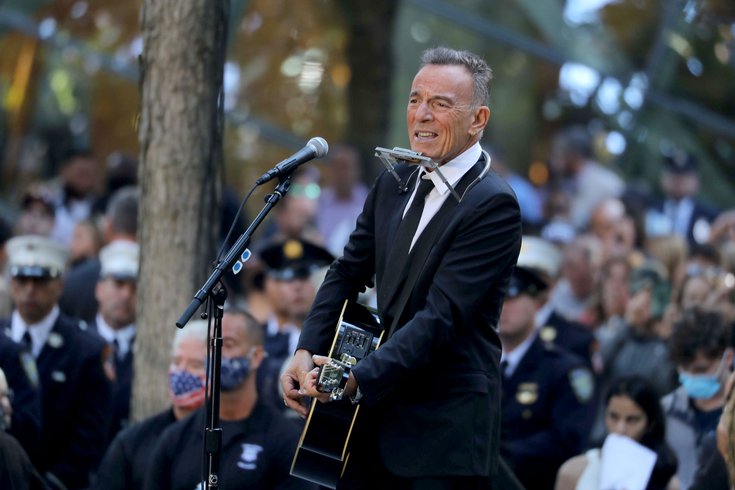 Bruce Springsteen sings during the ceremony marking the 20th anniversary of the Sept. 11 attacks at the 9/11 Memorial in New York City earlier this month. Springsteen was seen with John Mellencamp in Bay Head, Ocean County, on Sept. 16, 2021.

A Bruce Springsteen sighting at the Jersey Shore is a bit like winning the lottery. Does it happen? Yes. But you have to be extremely lucky.

A Toms River woman got the equivalent of a winning Powerball ticket with a Power Play multiplier on Thursday when she encountered Springsteen out and about with fellow rocker John Mellencamp.

Susan Fimiani, a realtor and beach artist, was in Bay Head, Ocean County, on Thursday morning when she noticed Springsteen and a man she initially thought might be Jon Bon Jovi, walking together along Bridge Avenue, according to the Asbury Park Press.

From her car, Fimiani reportedly addressed the second mystery man.

"It must be a lot of fun to walk down the street with Bruce," Fimiani said to Mellencamp.

Then she did a double-take.

"And that's when I realized it was John Mellencamp," she said.

Springsteen and Mellencamp graciously obliged Fimiani's request for a photo, which she later posted to her beach art Instagram account.

Mellencamp is originally from Indiana, but also owns property in South Carolina and New York City. Earlier this year, Mellencamp revealed that Springsteen will sing and play guitar on his upcoming 25th studio album, a sprawling collection of songs expected to be released before the end of the year.

During an appearance on Sirius XM radio in June, Springsteen confirmed his collaboration with Mellencamp.

"I worked on three songs on John's album and I spent some time in Indiana with him," Springsteen said. "I love John a lot. He's a great songwriter and I have become very close (with him) and had a lot of fun with him. I sang a little bit on his record."

Springsteen lives in Colts Neck, Monmouth County, and grew up in Freehold. His career took off in Asbury Park, and while he's celebrated as one of New Jersey's greatest stars, he recently declined to have a Garden State Parkway rest stop named after him along with other notable natives of the state.

Earlier this year, Springsteen was spotted out in Manasquan and also paid a visit to Jersey Freeze, a favorite Freehold spot he's visited since he was a kid.

Last weekend, Springsteen performed "I'll See You in My Dreams" in New York City to commemorate the 20th anniversary of the Sept. 11 attacks. His 20th studio album, "Letter To You," was released last year, and he recently wrapped up another run of his "Springsteen on Broadway" show in midtown Manhattan.

A release date for Mellencamp's upcoming album hasn't been set, but Springsteen fans can expect some music from the duo in the near future.