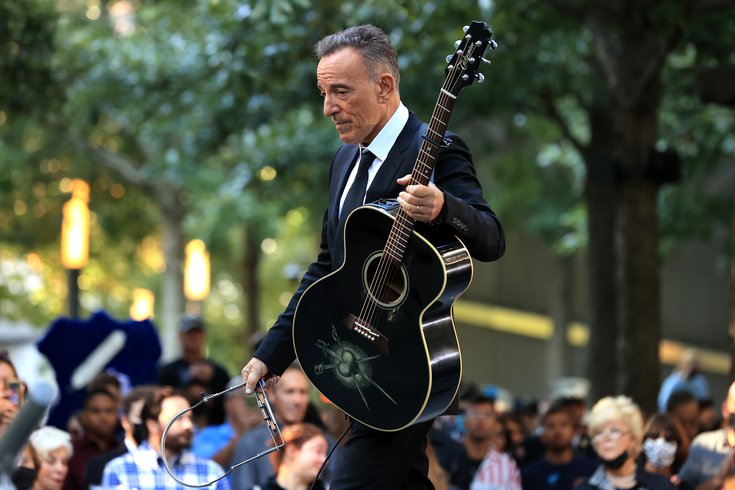 Bruce Springsteen performs during the annual 9/11 Commemoration Ceremony at the National 9/11 Memorial and Museum on September 11, 2021 in New York City. Springsteen plans to embark on a tour with the E Street Band in 2022.

A full year has passed since Bruce Springsteen fans were treated to his latest full-length album, "Letter To You," but the coronavirus pandemic and a revival of The Boss' acclaimed Broadway show have kept him from a major tour with the E Street Band.

Those looking for optimism about a return to the stage will be pleased to hear that Springsteen alluded to getting back on the road next year during a special event in Asbury Park last weekend.

Springsteen was part of a panel discussion at Asbury Lanes on Sunday celebrating bandmate Steven Van Zandt's recently published memoir, "Unrequited Infatuations," and the topic of a tour naturally came up when an audience member was given a chance to ask a question.

Backstreets Magazine, the publication known for covering all things Springsteen, shared The Boss' response in a tweet. (In fact, the question was asked by a Backstreets raffle winner who got to attend the event).

E Street Band prediction from @Springsteen himself: "We'll be out there in the world again next year, I hope. And I guarantee: if you bring your children and younger brothers and sisters or grandma for that matter, they're going to see the band at its peak." Oct 17 @TeachRock pic.twitter.com/HaaZOEgSuM

Springsteen didn't delve into specifics about tour plans, but that's as strong a confirmation as any that the band will be entertaining crowds in the near future.

Sunday's event, held at a formative venue for Springsteen and Van Zandt, featured an interview and panel participation from the likes of moderator Jon Stewart, actor Steve Buscemi and R&B icon Nona Hendryx. Proceeds from the event will support TeachRock, which is Van Zandt's foundational music curriculum.

Springsteen recently was spotted in New Jersey with fellow rocker John Mellencamp, whose upcoming album will feature a trio of songs featuring Springsteen on vocals and guitar.

Last month, Springsteen performed "I'll See You in My Dreams" in New York City to commemorate the 20th anniversary of the Sept. 11 attacks. He also recently confirmed his music will be featured on the soundtrack for "The Mustangs: America's Wild Horses," an upcoming film produced by Robert Redford.

Springsteen has been fairly prolific in the past few years, but it now looks like fans will have a chance to see that new music mixed in with classics in a live setting, sooner than later.