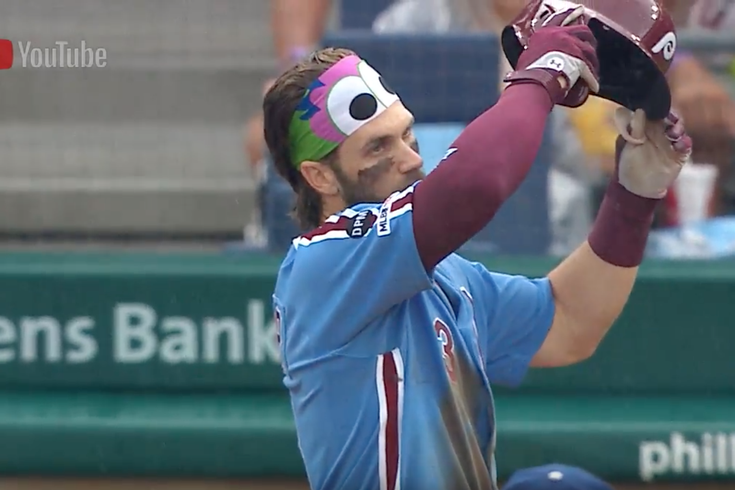 Bryce Harper shows the world his very good Phillie Phanatic headband during an at-bat against the Los Angeles Dodgers on Thursday afternoon.

The Phillies played the Dodgers on Thursday afternoon in the first-ever Major League Baseball game to be exclusively live-streamed on YouTube.

During a fifth-inning at-bat, Bryce Harper was facing a 2-2 count while rain drizzled all over South Philly. Between the precipitation and the city's recent humidity still hanging in the air, Harper was rather damp.

This is when he decided to take his helmet off, and in doing so revealed a delightful accessory: a Phillie Phanatic headband.

That's such a good headband.

The eyes, which very much look like the side-eye emoji, are perfectly placed above Harper's. The Phanatic's vibrant colors lend the headband a perfectly cartoonish look, which works especially well when the Phillies wear their eye-catching throwback uniforms.

The whole thing reminded us of when Harper decided to wear Phanatic cleats to start the season:

He did that, of course, after walking into Opening Day with a Pulp Fiction-inspired Phanatic-and-Gritty t-shirt.

It's pretty clear that Harper and the Phanatic are on good terms, both in front of the fans and behind the scenes.

It's also clear that fans enjoy the friendship:

Harper has a Phanatic bandana on and I've never wanted anything more. His hair is a close second.

Admit it...
Bryce and the Phanatic are BFFs.

Harper hit his 27th double of the season Thursday with the headband on, which means he should wear it for every game. Good luck, team laundry person.