The game, played at Citizens Bank Park, is the first YouTube-exclusive matchup in MLB history 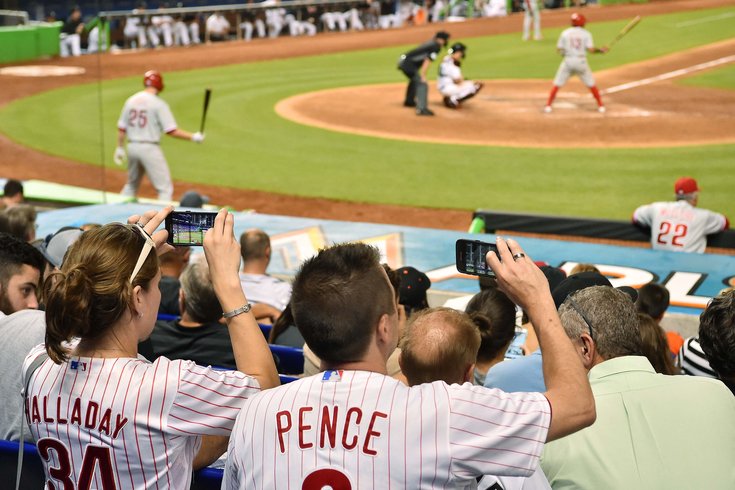 Here, Phillies fans take photos at Citizens Bank Park. The Phillies will host the first YouTube-exclusive MLB game on July 18 when they face the Dodgers.

Welcome to the future. We now watch baseball games live on our computers.

The Phillies will become the first Major League Baseball team to host a game broadcast live on YouTube when the Dodgers visit Citizens Bank Park on July 18. The game will be available exclusively on YouTube as part of a 13-game deal between the Google-owned video-sharing website and MLB.

The deal was announced at the end of April, and the games were officially listed on MLB's YouTube channel on Wednesday.

The games will be available for free to viewers in the United States and Canada, meaning you'll be able to watch the game at the video below, starting at 12:30 p.m. on July 18:

Welcome to the future!

Facebook did a similar thing with baseball games last season, when the social network streamed a Phillies game against the Mets and emojis took over the dang screen. The Phillies later played in the first Facebook-exclusive MLB game.

As someone who's spent time watching streams on YouTube, the site's chat feature is awful. It's an incessant stream that moves too fast for anyone to read, just like on Twitch. You're going to want to put the video in theater mode, if not full screen, right away.

From there, if you watch on your laptop, the experience should be similar to streaming games on websites like WatchESPN (which should still be called ESPN3), or sites like the late, great /r/NBAStreams. If you have a smart television, or just one with a built-in YouTube app, the experience will probably be seamless. A Chromecast, Amazon Fire stick, or Apple TV should do the trick as well.

Otherwise, just deal with the weirdness. Maybe even embrace it! It's one game, and they play so many.