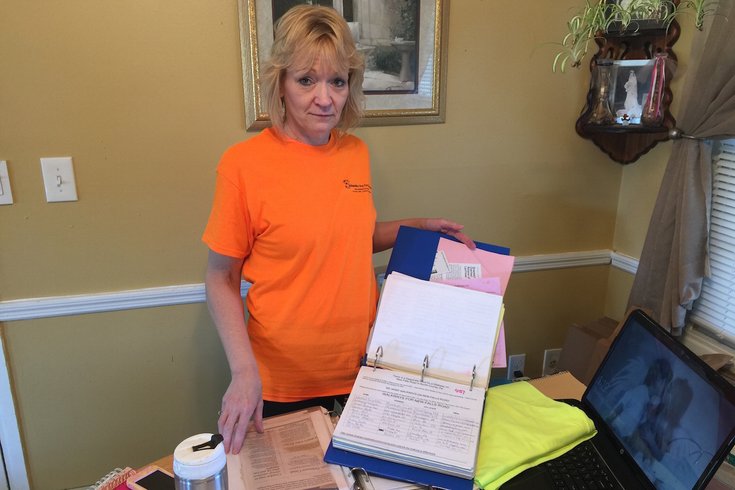 The tears flow as soon as Sharon Rearick starts talking about the moment her life turned into a nightmare.

In the early morning hours of July 22, 2012, she heard loud banging at the front door of her Levittown, Bucks County home. It was her sister-in-law who’d just gotten a call from nearby St. Mary’s Medical Center.

Get up, get up, Sharon, she said, your son John’s been hit by a car. You gotta call the hospital now. Sharon couldn’t dial the phone, though. She was shaking too much. So her sister-in-law made the call.

The nurse repeated the details that the sister-in-law shared just moments earlier. The conversation closed with the nurse’s suggestion to “get here as fast as you can get here.”

Less than five miles away, she’d see her 23-year-old son hooked up to a life support machine. That morning, she’d sign off on surgery for the ruptured spleen he’d suffered when struck by a hit-and-run vehicle on a section of New Falls Road that constitutes the border between Middletown and Bristol townships.

“I got to see him for a second before they took him,” she recounted Thursday morning in her dining room, not 10 feet away from an urn containing her son’s ashes.

While that procedure was successful, there was nothing surgeons could do to mend the damage of several brain bleeds and trauma that left doctors telling Sharon that her son wouldn’t likely recover.

Six days later, Sharon and her husband Jim accompanied John to an operating room. With the dire prognosis, they’d decided to remove him from life support.

“It took over my life. My family wanted to disown me. It’s all I would do. Persistence and consistence. Just when they think I’m going away, I’m there. They really thought I was going to just go away. I just kept at it.” – Sharon Rearick of Sidewalks Are For Everyone (S.A.F.E.)

“It was the hardest thing I had to do,” she said. “I still kinda feel guilty about it because what if this was the miracle time that somebody could come out of it? We wanted to be with him.”

As the breathing tube was removed in that operating room – amid low lighting and comforting music, a minister at their side – a mother held her living son’s hand for the last time. Though non-responsive, he gasped at her touch.

In letting him go, his organs could save others via transplant, her thinking went, but John wasn’t ready to say goodbye. He outlived the time frame for transplant viability, but succumbed to his injuries about an hour later. To this day, Sharon still finds herself fighting feelings of guilt.

“All my life, I protected him. He was special-ed. He had a lot of emotional issues, but I always made it better. I fought for everything he had,” she said through tears, knowing that her son died with ongoing family conflicts fresh in his mind. “This time, I felt like I was giving up on him. When he passed, my life was crushed.”

Sharon didn’t yet know – through that soul-piercing pain – that she was about to embark on a years-long mission in her son’s memory to prevent other families from knowing such tragedy.

AN EFFORT IS BORN

On a patch of grass between a wooden fence and a busy Levittown road sits a white cross amid a small oval filled with light-colored rocks and plants. John Rearick’s name and dates of birth and death are written upon it.

Video captured the night of the hit-and-run by Penn Jersey Auto’s surveillance cameras across a poorly lit New Falls Road shows John walking in the roadway near that very spot.

There are no sidewalks available for pedestrians so, after a night at the nearby McStew’s Irish Pub, John trudged along the roadway until he was struck by a motorist who would stop, survey the scene and flee his red Cadillac.

Later learning that her son had been flagged from the bar the night he was struck, a point of continuing anger for Sharon is that a cab wasn’t called to take him home.

But that’s really a side issue in the grand scheme of things for Jim, who remains angry that the driver fled the scene of his crime.

“If he would have stayed, I could honestly say this was an accident,” said Jim. “But when I see the video, how he saw what happened and couldn’t claim he hit a dog, now I’m gonna get you.”

Word quickly spread in the tight-knit community about the identity of the motorist who had a checkered driving history and a desire to get the car fixed while claiming that he’d struck a deer.

Jonathan Simmons, 27, who was driving with a suspended license, surrendered to authorities a little over two weeks later. He accepted a plea deal and was sentenced to 15-to-30 months in state prison.

Having written the family an unconvincing apology letter from behind bars – “I understand I was wrong and immature when it came down to being a responsible citizen” – Simmons had his freedom after two years.

Meanwhile, the loss of her son has consumed Sharon’s life to the point of problems holding down jobs, seeing vehicles repossessed and facing foreclosure.

“I thought life was tough before,” she said. 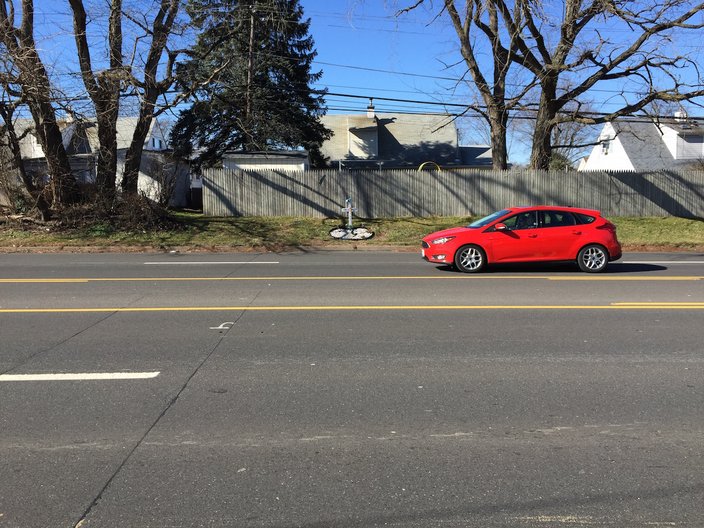 The memorial for John Rearick, who was fatally struck by a hit-and-run driver in July 2012, is visible across a busy stretch of New Falls Road between Middletown and Bristol Townships.

Her mission to get sidewalks installed along the roadway where her son lost his life – one that had a property owner leave a nasty note on the memorial unsuccessfully ordering that it be removed – is among the few things that keep her going.

“I needed to do something to make myself feel better, to make all this OK in my head,” she said of transitioning into her Sidewalks Are For Everyone (SAFE) effort four months later. Of her mental standing, she noted that, “I’m there, but I’m not really there.”

She contacted state Sen. Robert Tomlinson and state Rep. Tina Davis early on for guidance, and bombarded officials in both Bristol and Middletown townships with “I need your help” calls and emails.

Despite a response from a Middletown Township official, who wrote, “I feel that it’s my duty to inform you that construction of a sidewalk on New Falls Road would not be an easy or fast fight,” her efforts brought about a “request for traffic study of New Falls Road” via PennDOT.

Seeing triple-digit signatures within a day of posting a Change.org petition, SAFE moved on to holding fundraisers, awareness events and nonprofit-organization meetings.

There were delays which left the family wondering whether they could ever accomplish their goals.

“You get to the point where you’re, like, ‘What am I doing?’ You’re making yourself crazy,” she said. “I was crying all the time.”

There was also conflict over whether the townships or the state would oversee the installation of sidewalks once the traffic study determined there had been four pedestrian fatalities along that stretch of New Falls Road in the past five years.

Despite those efforts, there was scant success to claim through the subsequent years to the point of rain tamping down turnout at several outdoor fundraisers. Sharon drew hope, however, from the rainbows that she saw amid those rains and the cardinals outside her window that an online psychic said represented her late son.

“It took over my life,” she admitted on Thursday. “It really did. It took over. My family wanted to disown me. It’s all I would do. Persistence and consistence. Just when they think I’m going away, I’m there. They really thought I was going to just go away. I just kept at it.”

Fast forward to last December when Sharon realized that Leslie Richards, the current Secretary of the Pennsylvania Department of Transportation and former commissioner in Montgomery County, had a Facebook page. So she sent a message about her son’s death and her testimony before the Bristol Township Council.

“Sharon, I am very sorry to hear about your son,” Richards responded. “I’ve shared your story and concerns with our planning staff in the region. They will be in touch with you if there is any additional way we can help.”

That Facebook message made all the difference in the world.

A week later, Sharon learned that PennDOT stepped up with a $1.7 million offer to build the sidewalks on New Falls between Durham and Oxford Valley roads, provided that both Middletown and Bristol Townships sign off on maintenance agreements.

On Tuesday night, Middletown supervisors approved a letter of support for the New Falls Road project.

That decision left the project’s viability awaiting Bristol’s support, for which Sharon and supporters planned to attend a Thursday night meeting.

“I’m hoping that tonight’s decision will straighten out my head,” she said. “When somebody tells me something can’t be done, that just gives me all the more reason to say, ‘Yeah, it can be. There’s gotta be a way.’ When you tell me it can’t get done, it’s gonna get done.”

Before heading over to the meeting, Sharon put the uncertainty ahead into perspective.

“It feels overwhelming. Exciting. I can’t believe it. Relieved. I feel accomplished, but it’s not done.”

Sharon – accompanied by family, friends and a handful of S.A.F.E. supporters – arrived outside the Bristol Township council meeting just before 6:30 p.m. Thursday. The front doors were still locked, so they waited outside with boxes of T-shirts and swag bags and pens courtesy of mission backer Carpey Law.

After police set up the metal detector outside council’s meeting room, Sharon offered free T-shirts to many of the attendees who filled the room.

As the seven-member legislative body entered the room just after 7 p.m., Council Vice President Amber Longhitano smiled and gave Sharon’s a thumbs up, which served as a good omen.

After honoring a pair of township families for exemplary recycling practices and a township police officer retiring after 28 years on the job, Council President Craig Bowen bumped the New Falls vote to the top of the schedule.

“I want to get to the sidewalks!” he said. 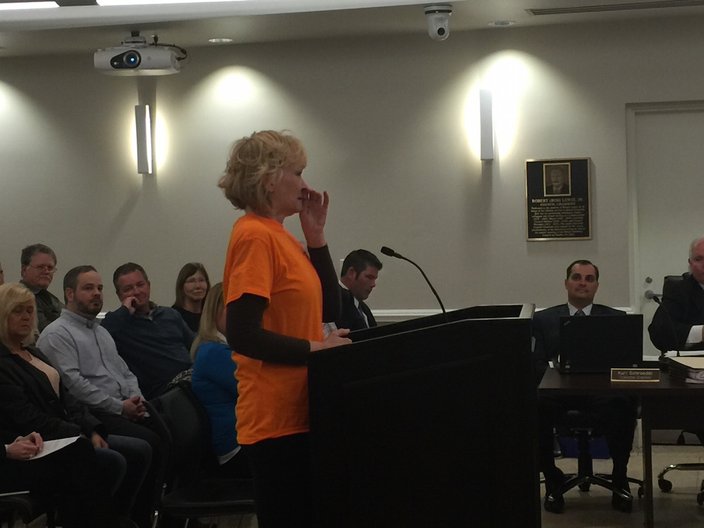 Sharon Rearick addresses Bristol Township Council after its unanimous vote in support of her effort to have sidewalks installed where her son was fatally struck by a hit-and-run driver in 2012.

At 7:28 p.m., nearly four years of effort was rewarded after four minutes of council discussion and a unanimous vote in favor of signing a letter of support to bring sidewalks to that stretch of roadway that’s proven deadly for four pedestrians.

“Congratulations, Sharon. You deserve it!” Longhitano said. “What an achievement.”

For his part, Bowen lauded the efforts of a S.A.F.E. team that had long heard predictions of failure.

“To see one person make a difference like this is amazing,” Bowen said. “I have a lot of admiration for what you’ve accomplished.”

Then, the Bristol Township Council stood to applaud Sharon Rearick, the grieving mother and tireless advocate for a cause that extended beyond memorializing her son to ensuring safety for those who have to walk where he lost his life. The stretch doesn't come close to remedying the dearth of sidewalks in the pedestrian-unfriendly area, but it's a start.

She asked for, and was granted, the chance to address Council.

“If we saved one person's life,” Sharon said, wiping tears from her eyes, reflecting upon the past several years, "it was worth every bit of it.”