Sometimes, even the best of intentions can lead to bad results. Officials in Bucks County learned that lesson last weekend.

Actually, they’re still learning it. We’ll get back to that shortly.

On a dreary Saturday morning, survivors of fallen soldiers assembled at the Global War on Terrorism Memorial in Doylestown.

The eye-catching banners have flown since 2007. Since 2014, the permanent memorial on East Court Street has also paid tribute to 21 Americans who gave their lives in the global battle against terrorism (and another who, while not technically killed in action, was included “out of respect to the family’s sacrifice.”)

On that day, county officials invited survivors of those 22 “Hometown Heroes” to bestow upon them the banners that hung at the site to memorialize their fallen loved ones.

The rigors of time had led officials to retire those banners.

With no intention of replacing them, the county took them down, cleaned and presented them to the survivors to take home as part of a “dignified retirement of the banners that have served to remind us of these great warriors and the sacrifices they have made."

Taken on its face, they comported themselves with the utmost respect in regards to banners that flew near the permanent $200,000 memorial.

In all, survivors of nine “Hometown Heroes” were on hand, according to county spokesman Christopher Edwards.

“Bad move Bucks County,” read the post from Ryan Manion Borek, whose brother was among those hometown heroes. “These flags were put up to honor our fallen heroes in perpetuity. If they are worn, replace them!”

Borek is president of the Travis Manion Foundation which “empowers veterans and the families of fallen heroes to develop character in future generations.” Ryan’s brother, a Marine 1st lieutenant, was killed while saving the wounded in Iraq nine years ago.

Ryan’s post – which actually went live the night before the ceremony – drew a mention in the Doylestown-based Intelligencer newspaper. The story drew a lot more attention after she appeared Monday morning on Dom Giordano’s show on 1210-AM, which is where I first heard it.

"The idea that we are taking memorials down when we are still involved in a current war just doesn’t make any sense to me." – Ryan Manion Borek

She was none too pleased.

“I was there 10 years ago when these banners came to fruition,” she said, noting her mother was inspired by seeing similar canvas banners in Harrisburg. “We are still a country at war, 16 years and counting. The idea that we are taking memorials down when we are still involved in a current war just doesn’t make any sense to me.

“I can’t wrap my head around it. The overwhelming response from this community has been (to) put the banners back up. This is part of the fabric of our community. You couldn’t drive by and help but see these men and women’s faces, in full color, with their names, with their ages. It gave me a sense that this community understood the value of the service and the sacrifice of those who served.”

Also none too pleased was the talk-radio host, who noted that his listenership could easily come up with the coin necessary to replace and rehang each banner, and more than once if need be. 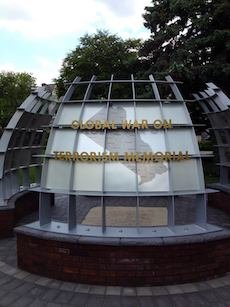 The reaction was such that Bucks County Commissioner Charles Martin called in to the show on Tuesday morning to do some damage control.

Having earlier told the Intelligencer that “this is sacred ground and will remain so,” Martin addressed the concerns and invited Giordano to tour the memorial.

Edwards – who said he didn’t hear complaint one before Manion’s Facebook post – rejected a few bits of information that he deemed inaccurate, notably that notifications were made in advance despite claims to the contrary, and that the removal of a trio of banners in January was merely a miscommunication.

“I think Dom’s going to take him up on the offer,” Edwards told PhillyVoice. Giordano said that would be the case.

“As of right now, everything is in limbo,” Edwards continued. “We’re figuring out solutions.”

Among the solutions mentioned were flying the banners in the hometowns of each of the deceased instead of at the memorial site itself.

“We still have to have a bit of dialogue about what will happen from here.” – Christopher Edwards, Bucks County spokesman

He said he’s “not certain that that’s going to happen” in regard to an early proposal that the Manion Foundation take over the banners.

“We still have to have a bit of dialogue about what will happen from here,” he said, noting that comparisons to Montgomery County’s removal of banners aren’t exactly apples to apples. “In Bucks County, we have a $200,000 memorial. Want to talk about perpetuity? That’s perpetuity. … It was a moving ceremony. They’re all heroes.”

That they certainly are.

There is a unique angle here that Manion wanted to make sure everybody knew.

“Those banners represent not those just killed in action, but also represent men and women who died in training accidents, in service accidents,” she said. “Those individuals are not represented on the GWOP memorial.”

After his Tuesday morning show, Giordano said he wasn’t sold on Martin’s words. He said it felt like the county commissioner “was trying to get out from under” the issue.

“I’m very suspicious of the whole thing,” he said, noting that he’d be OK with the banners being displayed in each hero’s hometown, but that they should be put back up at the memorial, as well.

They were a constant reminder to passersby of local sacrifices made in the ongoing war on terror, he said.

While plaques also call the site home, they can’t be seen from as far away as the banners could.

Anything short of replacing the banners feels as if it would be an affront to some of the survivors.

Even though nobody asked me to chime in, that’s my job as a columnist, so here goes: Fly those banners wherever the survivors want them to be flown.

Theirs is the sacrifice being honored, and their lost loved ones are those being memorialized.

Considering that, they, and they alone, should have the final say, Bucks County.