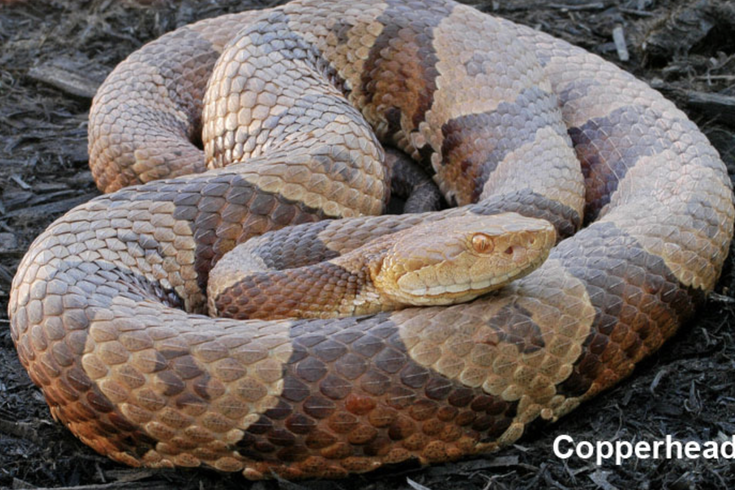 Copperhead snakes are common in the United States, with a venomous bite that can produce severe pain and complications. A Bucks County teenager was treated at Children's Hospital of Philadelphia this week for a bite at High Rocks Park last weekend.

A Bucks County teenager and reptile enthusiast got a bit more than she bargained for when she attempted to pick up a wild snake in Tinicum Township last Saturday night.

Audrey Weir was with her friends at High Rocks Park when someone in the group spotted the snake on the ground. Thinking it was a harmless corn snake, the 17-year-old Council Rock South student approached the snake. It ended up striking at her and sinking a fang into her right hand.

When the initial shock wore off, Weir recognized the snake's heart-shaped head, hourglass markings and red, orange and brown color pattern — it was a venomous copperhead snake. They're a common form of pit viper seen in the Northeast U.S. and other parts of the country, but they often resemble other nonvenomous snakes. They are among the most common types of snake bites in the United States.

Weir immediately understood that her hand was in trouble, so she drove herself over to St. Mary Medical Center in Middletown, where she was initially sent to the waiting room. As the effects of the poison intensified, she knew she needed more urgent attention. She flagged a paramedic, and while St. Mary Medical Center could offer her morphine for the pain, she ultimately had to be sent to Children's Hospital of Philadelphia to be treated with anti-venom.

Copperhead venom can be extremely painful, but it's rarely fatal for humans. Their venom is hemotoxic, which means it typically causes temporary tissue damage in the immediate area of the bite. Usually measuring about 2-3 feet in length, copperheads are unlike most venomous snakes in that they usually give no warning before they bite. As soon as a threat is perceived, they immediately make a defensive move.

Sometimes their aggressiveness works against them, as in this week's widely reported story out of Alabama, where a copperhead snake was devoured in a fight with a kingsnake.

Weir told the Bucks County Courier Times the pain from the venom felt like "a fire pain going through my hand" and likened the sensation to a burning broken bone.

An ambulance from Newtown rushed Weir to CHOP, where the hospital's director of toxicology had rushed in to administer anti-venom treatments. Weir's hand had swollen to four times its original size.

The teen was given anti-venom treatments every six hours until she was released from the hospital on Tuesday and told to follow up with specialists for ongoing pain and blood work.

A spokesperson for the Pennsylvania Department of Conservation and Natural Resources told the Bucks County Courier Times that copperheads are common in Bucks County, but bites happen infrequently. Weir's bite was the first reported in 2021 and there were seven total over the previous two years.

Weir's family has discussed the possibility of working with High Rocks Park to install signs warning about snakes, but it's unclear whether the addition of signage might encourage people to look for snakes instead of leaving them alone.

Weir, who owns several reptiles of her own, doesn't seem to be too daunted by the incident. If anything, it may have deepened her appreciation of snakes.