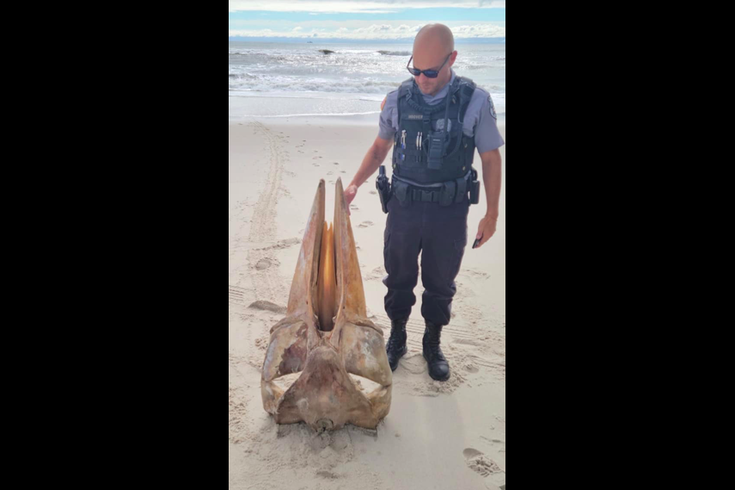 An Island Beach State Park police officer poses for a photo with a large animal skull found along the shore on New Jersey's Barnegat Peninsula.

Authorities at Island Beach State Park on the Barnegat Peninsula have identified a massive skull that appeared along the shore in Berkeley Township on Sunday. The skull belonged to a minke whale and is believed to have been the same animal that was buried on the beach last year.

State park police posted a photo of the skull on Facebook, with an officer standing next to it for comparison.

You never know what you are going to find on the beach after a storm... Our State Park Police found this skull yesterday... As soon as we identify we will post. Any guesses?

Before the skull's identification, the finding prompted a barrage of guesses on social media, where some correctly pegged it as a minke whale, the smallest of the baleen whales.

"It's too small for a humpback whale and the back of the skull is too wide – this is a close relative, however – the minke whale, Balaenoptera acutorostrata," said one commenter. "This is an immature specimen, but much more mature than a humpback whale of this equivalent size."

Others ventured a wishful guess that it's a pterodactyl, though its growth and condition clearly indicate its modern rather than a fossil.

Those without much more than a wild guess argued that a marine biologist should be brought in to evaluate the specimen.

"Will have to call George he’s a marine biologist he can tell us what it is!" one commenter wrote in reference to "Seinfeld."

Bob Schoelkopf, founder of the Marine Mammal Stranding Center in Brigantine, told PhillyVoice there's good reason to believe the skull is from a minke whale that was found and buried close to the dune line at Island Beach State Park in June 2020. Flooding and tides can erode the beach, surfacing bits and pieces of buried animals.

"You can't be precise when you're digging a hole for an animal as large as a whale," Schoelkopf said, adding that some bones may be deeper than others. The skull may have had a gas pocket that helped bring it to the surface.

It's not unusual that the skull would be found largely intact, Schoelkopf said. He hopes to see the skull used at the park's interpretive center, a small museum where it can become a learning tool for kids.

Northern minke whales, also known as common minke whales, are found in the Atlantic Ocean as far north as Greenland and as far south as New Jersey. In September 2019, a young minke whale was euthanized after it washed ashore at Island Beach State Park, and another juvenile minke whale died at Sandy Hook Bay Marina earlier that year.

Minke whales are not considered endangered, but stranding incidents along the east coast of the U.S. have increased in recent years, according to the NOAA Fisheries. Schoelkopf said they have become a fairly common occurrence along the New Jersey coast.