The Keystone State has averaged eight tornadoes per year since 1950. This year, the number is already at 16. 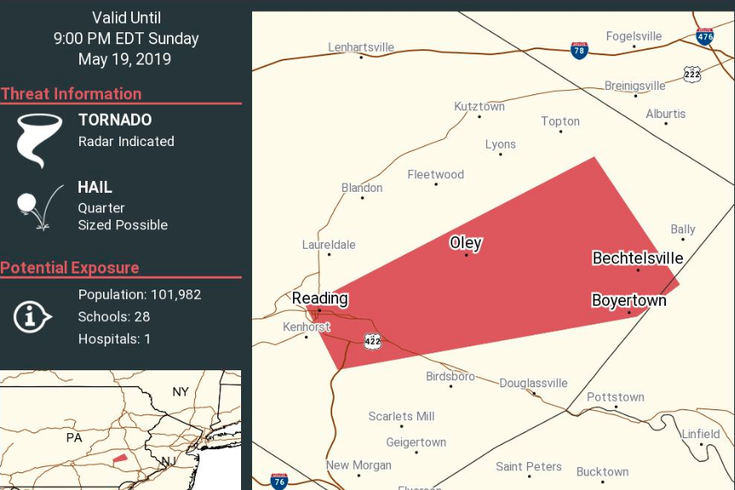 The map above was shared by the National Weather Service. The area in red shows the portion of Lancaster County that had been placed under a tornado warning Sunday evening.

After news came Thursday of a football field-sized tornado touching down in Bucks County last weekend, the National Oceanic and Atmospheric Administration has already confirmed 16 tornadoes in Pennsylvania in 2019.

The average number of tornadoes in Pennsylvania in a given year, according to data that stretches back 69 years, is just eight, the Morning Call reports.

Local forecaster John Homenuk told the Morning Call that Pennsylvania is "in a more active period right now, without a doubt."

Truly disastrous tornadoes aren't all that common in Pennsylvania. The most extreme tornado in the state's history came in 1985, when a series of twisters -- including the only Pennsylvania tornado ever rated EF5 on the Enhanced Fujita Scale, which ranges from EF0 to EF5 -- touched down across western Pennsylvania, upstate New York, and Ontario, Canada.

The tornado that touched down in Bucks County last Sunday, near a campground in Tinicum Township, touched the ground for roughly one minute and moved 0.25 miles, uprooting trees and damaging camping trailers. The tornado was rated an EF1, and no injuries were reported.

On Thursday, a tornado warning was issued by the National Weather Service for Downingtown and Coatesville: