This afternoon, Wish Upon A Wedding will throw Kathy and Anthony Campanella a huge celebration 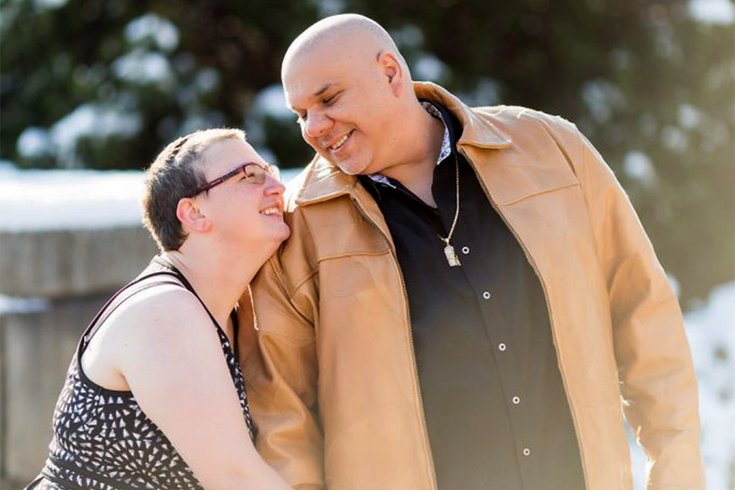 Kathy and Anthony Campanella, of Moorestown, New Jersey, will celebrate their 16th anniversary by renewing their vows. Kathy is battling breast cancer that has metastasized to her bones and brain.

Kathy Campanella loves the way her husband, Anthony, makes her laugh – particularly when life throws its biggest challenges their way.

"I think the big thing is communication and his sense of humor," Campanella said. "We're very open with each other. He's very, very funny. Even a hard situation, he can make it into a funny situation."

The last seven years have been particularly difficult for the couple, as Kathy battles breast cancer that metastasized to her bones and brain.

But Anthony's sense of humor – and their commitment to one another – have helped the Moorestown, South Jersey couple keep pushing forward.

The Campanellas, who have three children, will celebrate their love Wednesday afternoon by renewing their vows on their 16th wedding anniversary.

Thanks to Wish Upon A Wedding, a nonprofit organization that provides weddings and vow renewals to couples facing serious illness, they'll have quite a party at Union Trust in Philadelphia.

"It's going to be what you always dream that big wedding will be," Kathy Campanella said. "The food and the cake are amazing. Just everything is going to be gorgeous. All of our family and friends will be there. It will just be pefect."

Kathy, 37, and Anthony, 47, met in August 2001 as they enrolled in classes at Camden County College. Their relationship began as a simple friendship, but they began dating on Jan. 1, 2002. Their dates went so well that they got married in a courthouse ceremony at the end of that month.

The Campanellas kept their wedding celebration small. But over the years, they dreamed of throwing a big party for their 20th anniversary.

But nearly 10 years into their marriage, Kathy was diagnosed with breast cancer. She underwent multiple treatments, including a double masectomy, chemotherapy and radiation.

Three years ago, they learned the cancer had metastasized to her bones.

Last year, they found out the cancer had spread to her brain. She suffered a seizure in March and needed brain surgery in May.

'IT'S GOING TO BE MAGICAL'

Despite the hardships, the Campanellas' marriage only grew stronger, Kathy said. She remains grateful for the Anthony's support.

"After my surgery, I couldn't even wash my own hair," Kathy said. "He would sit there and do it. He would go to the appointments with me. He would learn about it. We did it together. It wasn't just me doing it. We walked it together."

"Sometimes, you have to take a step back and say, 'Everything isn't as bad as it seems.'" – Kathy Campanella

When Kathy is feeling down, she said Anthony is there to cheer her up. And she'll try to pick up his spirits when they drop, too.

"Sometimes, you have to take a step back and say, 'Everything isn't as bad as it seems,'" Kathy said.

For instance, Kathy described herself as a workaholic before she became sick. But now that she's at home, she experiences moments that otherwise might have been missed.

Following the news that the cancer had metastasized to her brain, the Campanellas decided to bump up their planned 20th anniversary party.

Kathy shared their story with Wish Upon A Wedding, which decided to throw them a snowflake-themed party as they renewed their vows.

"I think it's going to be magical," Kathy said.

At 3 p.m., Kathy and Anthony will exchange vows – again – at Union Trust in Old City. Their children, extended family and friends will be among the 50 gathered guests.

By their sides, bridesmaids and groomsmen will be dressed beautifully. Bouquets will be filled with white roses and daisies, and tied together with navy blue ribbons.

Their guests will enjoy delicious appetiziers and a nice dinner. And they will have a tiered cake – chocolate with mint on the bottom, lemon with rasberry on the top.

"I'm just so excited," Kathy said. "We did the small one. I kind of feel like doing the big one later is kind of better."