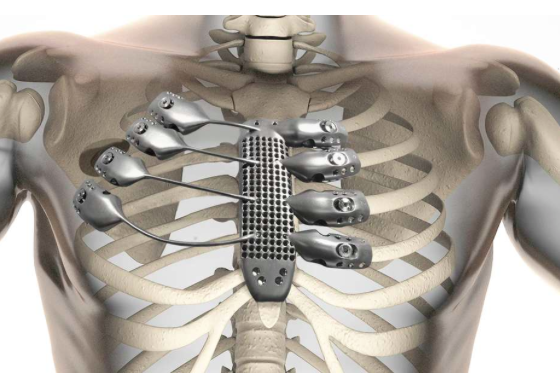 The arrival of seemingly far-flung medical experiments as clinical lifesavers continues to be asserted by daring physicians and patients who push the limits of current interventions.

In the latest example of an innovative leap forward, a cancer patient in Spain has become the world's first recipient of a 3D-printed Titanium rib cage and sternum, GizMag reports. The 54-year-old patient was suffering from a chest wall sarcoma that required removing sections of his skeleton after a cancerous tumor wrapped around his rib cage.

Due to the complex structure of the rib cage and sternum, doctors at Spain's Salamanca University Hospital feared that the flats and plates typically implanted in situations like this would become loose. As an alternative, they decided that a custom 3D-printed implant made of lightweight Titanium would be a better long term solution for the patient.

Using high-resolution CT scans, the surgical team at Salamanca reached out to Melbourne, Australia-based CSIRO's Lab 22 to coordinate the design of the implant. The organization used the $920,000 Arcam electron beam metal 3D printer to create the sternum and partial rib cage, whose design process is described in the video below.

After a successful surgery, the Spanish patient was discharged from the hospital 12 days later and is reportedly on his way to a full recovery.

The accomplishment joins a growing list of 3D-printed implants that have been successfully used as medical solutions, giving credence to the experimental promise such technologies hold even as forecasts about their value have cooled.