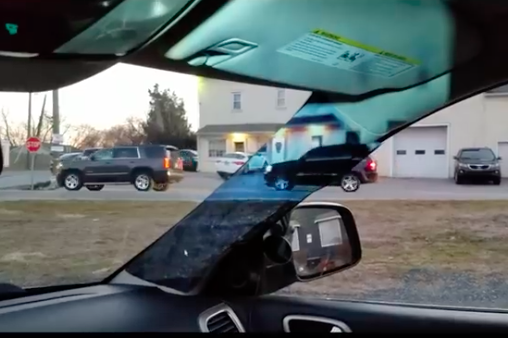 Alaina Gassler, a 14-year-old student at Avon Grove Charter School in West Grove, Pennsylvania, won the $25,000 top prize at the Broadcom MASTERS competition. Gassler's project was a prototype for a camera-based system to project images of a driver's blindspot on the interior pillar that blocks it.

A 14-year-old girl from Chester County has been awarded $25,000 for a science and engineering project that may provide a solution to the danger of blindspot-related car accidents.

Alaina Gassler is an eighth grade student at Avon Grove Charter School in West Grove, where she developed a method for projecting a live image of the view obstructed by the portion of a vehicle's frame, commonly known as a driver's blindspot. The image of what is behind the blindspot is projected onto the blindspot, itself, creating the illusion that the car's frame is invisible.

Gassler entered her project into the 2019 Broadcom MASTERS competition, a collaboration between the non-profit Broadcom Foundation and the Society for Science & the Public.

The National Highway Traffic Safety Administration estimates about 840,000 blindspot accidents occur in the United States each year, resulting in about 300 deaths.

The system Gassler developed uses an exterior-mounted camera on the car's structural pillar that relays images onto a custom-fitted projection inside the car.

She explains the project, called “Improving Automobile Safety by Removing Blind Spots," in the video below.

“Congratulations to Alaina, whose project has the potential to decrease the number of automobile accidents by reducing blind spots,” said Maya Ajmera, president and CEO of the Society for Science & the Public. “With so many challenges in our world, Alaina and her fellow Broadcom MASTERS finalists make me optimistic. I am proud to lead an organization that is inspiring so many young people, especially girls, to continue to innovate.”

While Gassler's prototype may be a ways off from deployment inside vehicles, it offers a blueprint for how to improve blindspot safety in future models.