Carson Wentz: Strengths and weaknesses through the first two weeks of training camp 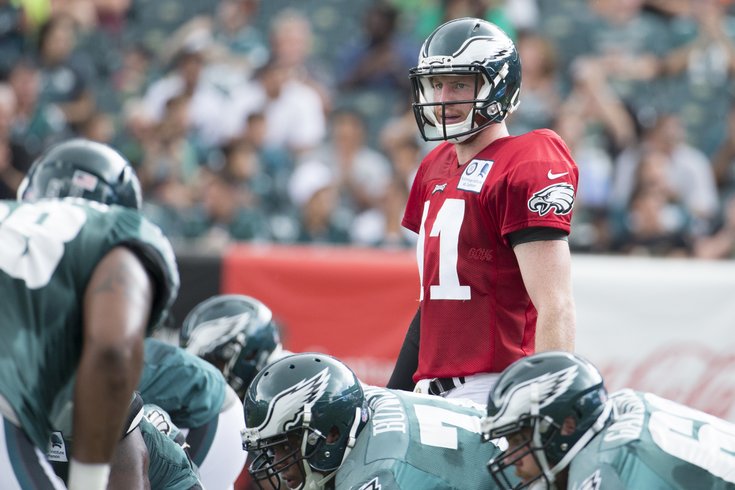 Carson Wentz has a ways to go, but there's plenty of room for encouragement.

Tonight the Philadelphia Eagles will play their first preseason game, and many Eagles fans will get their first look at second-overall pick Carson Wentz. After having watched him in person for a week at the Senior Bowl, a day at the Combine, and in a couple dozen Eagles practices, here are some strengths and weaknesses I've observed in his game.

• Size: At 6'5, 237, Wentz is the biggest of the Eagles' quarterbacks, and has prototypical size for the position in the NFL.

• Arm Strength: Again, of the Eagles' quarterbacks, there's little question that Wentz has the strongest arm of the group. He delivers deep passes with ease and can put the ball on a line on intermediate throws.

• Athleticism: There is a wide gap between Wentz and the other Eagles' quarterbacks here. Wentz is a threat to run. He can escape the pocket and hurt you with his legs. While you won't see him barrel over defensive backs in a training camp setting since hitting the quarterback is off limits, that's a part of his game as well.

• Aggressiveness: By far, Wentz has taken more shots down the field than either Bradford or Daniel. Taking risks isn't necessarily a strength unless you're actually producing big plays, and in fact can be a negative if those risks are producing turnovers. However, I'm of the belief that the quarterback has to be able to make difficult throws down the field to be successful in this league, so for now, we'll chalk up Wentz's willingness to let it rip as a strength.

• Making throws while climbing the pocket: When he senses the outside pass rush closing in, Wentz does a great job climbing the pocket while maintaining his vision. Typically, when quarterbacks are forced to quickly move up in the pocket, their vision will narrow to the middle of the field, making them less likely to make throws to the sideline. Wentz, however, still uses the entire field when he steps up in the pocket. He can contort his body on the run and throw sideline to sideline. That puts the defense in a difficult spot. They'll have to respect his running ability while still covering the entire field.

• Improvisation: I've been impressed by Wentz's ability to make something out of nothing. For example, there have been a few occasions in which he's fielded a shotgun snap off the ground, popped up, and quickly delivered a completed a pass, when other quarterbacks might have been content to just jump on the ball or try to get outside the tackle box and throw it away.

• Throwing on the run: This is where Wentz has made some "wow" plays during camp, and I believe it's because he's stopped thinking momentarily and is just playing on instinct. Wentz can throw with velocity while going to his right or left. He's not always pinpoint accurate while on the run (as most quarterbacks aren't), but there's big play potential here.

• Consistent accuracy: Wentz has often been inaccurate during training camp. When he is off, he is most commonly overthrowing his receivers, missing them high. Doug Pederson attributed that to mechanics, timing, and not yet completely seeing what he's supposed to be seeing. In other words, when Wentz has a more solid grasp of where his receivers will be and what opposing defenses are trying to do to him, the thinking is that Wentz will settle in and become more accurate like he mostly was at North Dakota State. But for now, improvement in this area is clearly needed.

• The wobble: Wentz's passes have often wobbled. They still get there, but the wobble makes them more difficult to catch. When the weather becomes harsher, wobbly footballs are more prone to dying in the wind. Again, this is not something Wentz did much in college. Pederson attributed it to Wentz not yet being fully being up to speed mentally and believes the wobble will wane.

• Locking in: There have been times when Wentz will zero in on a receiver, allowing the defense to anticipate where he's going with the football.

Wentz is a rookie, just as a reminder. Unsurprisingly, he's been up and down. There are times he'll make plays that Bradford and Daniel could only dream of making. Other times, he'll miss a throw wildly or the ball will come out a little ugly. As Pederson explained (and I buy it), a lot of that has to do with trying to learn the offense while adjusting to the speed of the game at this level. Wentz has a ways to go before he'll be the franchise quarterback the Eagles think he can be, but there's been enough good to offset some of the early growing pains.