Sam Bradford may not have much trade value next offseason 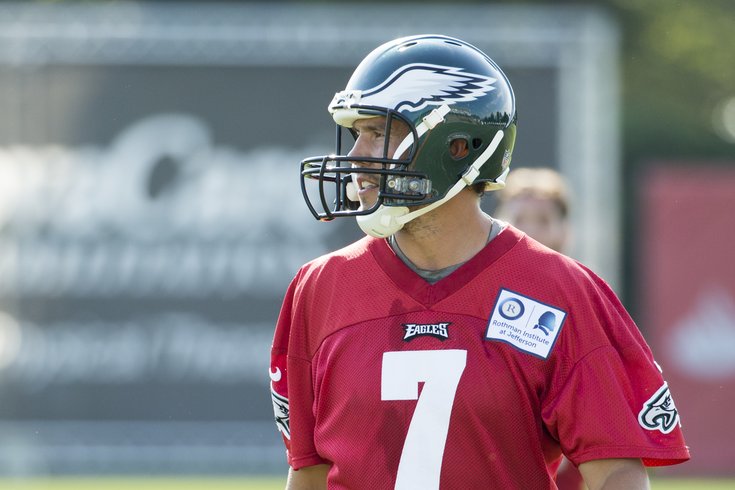 As our Rich Hofmann pointed our in our links post this morning, every year, Mike Sando of ESPN publishes a very interesting quarterback ranking that is worth your time. Sando's piece this year is a survey of 42 league insiders – 10 general managers, five head coaches, seven offensive coordinators, five defensive coordinators, eight personnel evaluators and seven other position coaches/executives – and their rankings of 33 NFL quarterbacks, including the Philadelphia Eagles' Sam Bradford.

In other words, it's not just one of hundreds of schmucks with an opinion putting out some lazy list for page views.

Some of the quotes on Bradford:

"He was healthy for the first time, he knows where everybody is, knows how to use them and he reads coverages easily," a head coach said.

"He has the arm talent, I think he is a smart guy, I think he is a little [soft], which came out the way he handled his business to begin with this offseason," a QB coach said. "I just don't see the decision-making, consistent accuracy and the fortitude that [makes me think] we have a shot to win every Sunday. With Doug Pederson coaching, I would take Alex Smith over Bradford, but it's the same kind of situation."

"I'm not the greatest Bradford guy," another QB coach said. "I don't think he can create anything himself, and in this day and age, pockets aren't going to be clean."

The concerning takeaway here is that last year, Bradford was tied for 23rd in the survey, which means that he fell in the opinion of NFL evaluators, despite his magical #LastSevenGames.

Many believe that Bradford is almost certain to be traded next offseason, seeing as the Eagles invested heavily in rookie quarterback Carson Wentz. If you're of the opinion that 42 league insiders represents a large enough sample size to conclude what the league as a whole thinks of him (as I do), then his trade value at the present time is likely very low.

Bradford is going to have to have a far better season in 2016 than he did in 2015 if the Eagles are going to receive decent trade compensation next offseason.