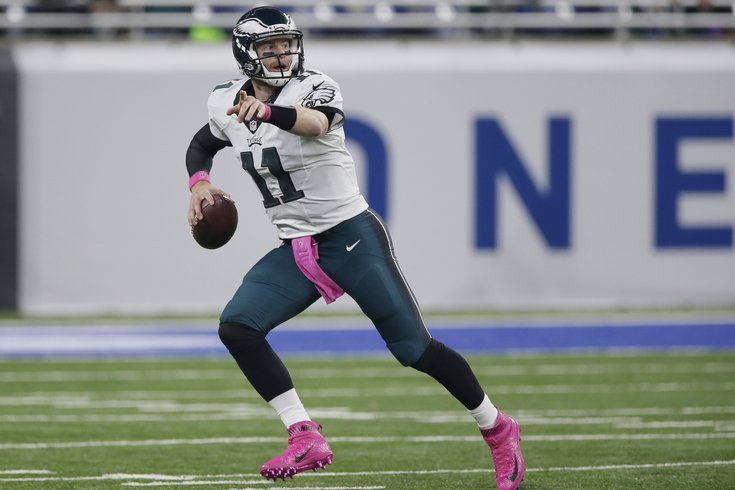 Carson Wentz has the improvisational skills of a 10-year veteran.

In the Philadelphia Eagles' third game against the Pittsburgh Steelers, the play of the day came when Carson Wentz avoided a pass rusher by escaping the pocket to his right, waited for Darren Sproles to clear the linebacker, and lofted a perfect touch pass to Sproles, who then ran for a 73-yard score.

Perhaps what was so impressive about that play was how easy Wentz made it look.

Against the Lions on Sunday, Wentz topped himself. On a play in which he had all day to throw but seemingly did not have any open receivers, Wentz rolled to his right and pointed for Jordan Matthews to run deep down the field.

Any defensive back who sees that from a quarterback on a broken play is going to turn and run so that he doesn't get beaten deep by the receiver. However, instead of lofting a deep throw, Wentz made an accurate back-shoulder throw while on the run to a spot behind the corner, where the corner had little chance to recover and knock it away, especially when the quarterback has already told the world he's throwing deep.

And again, Wentz makes this look easy. Yes, the throw is good, but what is so impressive here is the subtle way Wentz toys with the corner, putting his receiver in the best position possible to make a play.

In his post-game press conference, Wentz downplayed it.

"Some of those, they're broken plays, and that's when players make plays," he said. "I have really good trust with (Matthews), and really all my receivers, so on a play like that it was just players making plays and he did a really good job."

A season ago, Eagles receivers often didn't get open. The consensus feeling is that the Eagles' receivers, while still not world beaters by any stretch, have played better this year.

Have they, though? Or is the quarterback just doing a better job of "throwing them open?" I lean heavily toward the latter.

The Eagles are no longer unbeaten, but the big picture takeaway is that Wentz showed once again on Sunday that he is as savvy as a rookie quarterback gets.