Three reasons – aside from the officiating – Wentz and Co. are no longer undefeated 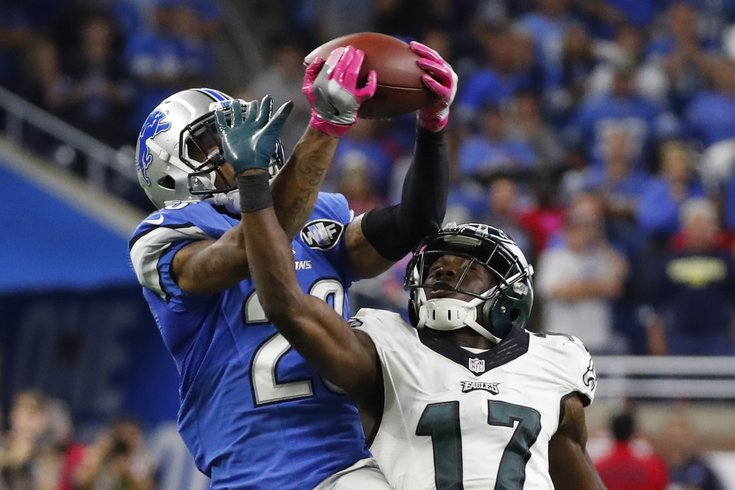 There's no denying that the officiating was, at the very least, questionable during Sunday's game between the Eagles and the Lions at Ford Field in Detroit. But the 14 penalties called on the Eagles, some of which were just flat-out bad calls, weren't the only reason – or even the biggest reason – the Birds were handed their first loss of the season.

That doesn't make the loss any easier to swallow.

Before you could even blink, the Lions were up 14-0 at the end of the first quarter, already matching the most points the Eagles' top-ranked defense had allowed all season after the game's first 15 minutes. And after not giving up a touchdown pass in each of their first three games, Matthew Stafford threw one to running back Theo Riddick on each of his first two drives.

The Eagles cut into the lead with a touchdown of their own – Carson Wentz hit Ryan Mathews on the Eagles' next possession – but when Stafford hit Marvin Jones for their third score in as many drives, it suddenly starting feeling like Thanksgiving 2015 all over again.

But then halftime happened. And it was a totally different Eagles defense that showed up in the second half, one that looked more like it did over the first month of the season than it did in the first half in Detroit. The Eagles rattled off 16 unanswered points and ultimately took a 23-21 lead with 6:45 left in the game.

That's when things stopped being fun for the Birds and their fans. Here's a look at a few reasons, aside from the aforementioned officiating blunders, why the Eagles are no longer undefeated.

What time does the game start?

For the first two quarters, the Eagles were almost unrecognizable. It looked as if they forget that their bye week ended and they actually had a game to play today.

On offense, they failed to score on their opening drive for the first time this season, but that's hardly the reason they lost, especially when you consider they scored on each of their next four possessions. The defense, on the other hand, was a mess for pretty much the entirety of the first half. They allowed 21 first-half points after holding opposing offenses to just 20 points in their first three games ... COMBINED.

Sure, the Eagles were able to overcome that 14-point deficit and ultimately take the lead in the fourth quarter, but had they not been playing catchup most of the game, perhaps they would have been leading by more than two points when Ryan Mathews fumbled and set the Lions up for a go-ahead field goal with 92 seconds left in the game.

Speaking of Mathews' ill-timed fumble, it was the Birds' first turnover of the season and couldn't have come at a much worse time or position on the field. The defense, however, nearly bailed out of offense out by stopping the Lions, but a big third-down conversion by Stafford put the Lions at first and goal. After a pair of running plays and sack of Stafford, Matt Prater's chip shot put Detroit ahead for good.

Following the game, Mathews was ready to take responsibility for his role in the loss.

Ryan Mathews on the fumble: "I f**cked up. I let my teammates down" #Eagles

But Mathews wasn't the only player to commit a costly turnover on Sunday.

The other came from rookie QB Carson Wentz, who otherwise had yet another impressive start. On the Eagles very next offensive play, Wentz tried hitting Nelson Agholor deep, but the pass was intercepted. Following the game, head coach Doug Pederson said that the play was not designed to go deep, but it's certainly an option.

"It's not necessarily designed for [a deep ball] but the opportunity was certainly there," Pederson said after the game. "Detroit did a nice job defending the first, second, third progression on the play. Obviously, [if it's not a catch] you're hoping that you get a pass interference penalty or an incompletion. So it's worth a shot."

Wentz put the blame on himself, saying that he wanted to give Agholor a chance to make a play on it, but left it too far to the outside, allowing CB Darius Slay to come away with the interception.

"You always want to get the drive started on the right foot, especially in those situations," Wentz said following his first NFL loss. "But the coverage kind of dictated that and we didnt make the play, they made a great play and that's how it worked."

For those of you keeping track at home...

Eagles went 257 offensive plays this season before turning the ball over.

They then committed a turnover on each of their next two plays.

"I thought [Wentz] played great," Pederson added. "And I'm glad he got the interception out of the way."

Although Eagles fans are probably wishing it came at any other time...

Unfortunately for Pederson and defensive coordinator Jim Schwartz, it seems as though the main adjustment they made at halftime only served to highlight a wrong decision they made earlier in the game.

Linebackers Nigel Bradham – you may have seen his work on Law & Order – and Jordan Hicks were rarely on the field in the first half. Instead, it was Mychal Kendricks and Stephen Tulloch getting the lion's share of snaps. At least in the case of Bradham, who was arrested over the bye for trying to carry a loaded gun onto an airplane in Miami, it seemed like he was being disciplined for his most recent off-field incident.

He wasted no time making his presence known and even recovered the Stafford fumble that led to an Eagles field goal and cut Detroit's lead to 21-20.

Hey look, D is playing better with Jordan Hicks and Nigel Bradham on the field instead of Mychal Kendricks and Stephen Tulloch. Who knew?

Bradham has been one of the Eagles' best linebackers this season, so it was surprising to hear Pederson say after the game that he was not being punished in the first half. Instead, his lack of playing time can be attributed to a rotation that the coaches were hoping would lead to having fresher LBs late in the game.

Kendricks stinks right now, but that's on Schwartz, IMO. Why is he taking Hicks and Bradham off the field in 3d and long?

"No, not at all," Pederson said when asked if Bradham's lack of snaps had anything to do with his most recent arrest. "Definitely wanted to get [Stephen] Tulloch some more reps tonight early in the game and then keep Nigel and Jordan fresh and healthy as the game wore on."

Considering the Lions' first two touchdowns came on passes to the running back, having Bradham and Hicks on the field earlier could have helped prevent that.

As for Kendricks, he had an awful game. He missed several tackles and was covering Riddick on at least one of his touchdowns.

You can't rack up 14 penalties (and 111 yards) and expect to win. And while some of them were bogus – just go back and look at the chop block that was called on Darren Sproles for one example – there were more than a few dumb, deserved ones.

How about Fletcher Cox ripping off Stafford's helmet on a third-down sack? 15 yards (and at least four points).

Or the two delay of game penalties because Jason Kelce couldn't hear Wentz screaming for the ball? Self-inflicted.

But then there are the ones like the holding call on Brandon Brooks that negated a first-down.

It was just that kind of day for the Birds...

Mychal Kendricks was hardly the only one guilty of this, but ...

This isn't going to be a first down, but been seeing way too many missed tackles by Kendricks dating back to last season. pic.twitter.com/AaQzvHpMBt

Oh, and the referees initially marked that as a first down and it took a Pederson challenge to get the call right. Perhaps the only person on the field who had a worse day than Kendricks was Pete Morrelli and the rest of the officiating crew.