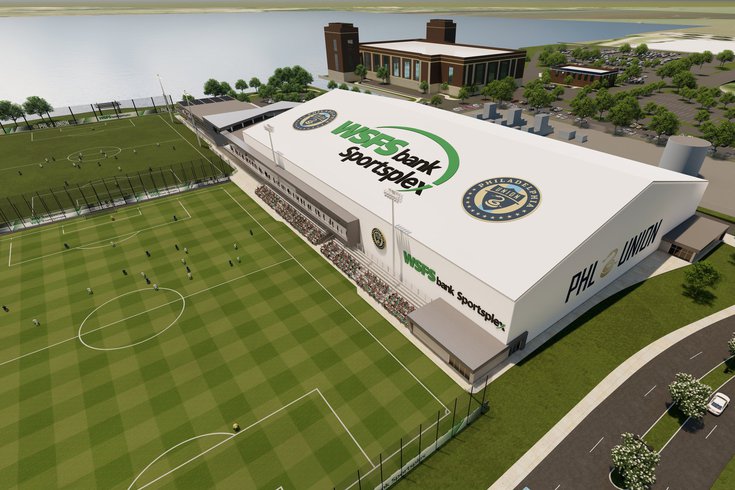 The rendering above shows the Philadelphia Union's plans for the WSFS Bank Sportsplex along the Delaware River waterfront in Chester, Pennsylvania.

The Philadelphia Union plan to construct a massive sports and recreation complex along the Delaware River waterfront in Chester, expanding the campus of the Major League Soccer team's home at Subaru Park.

The Union shared preliminary plans for the WSFS Bank Sportsplex on Tuesday afternoon, including a video that shows a virtual tour of the project's renderings.

In addition to plans for new indoor facilities and outdoor fields, the complex will be catered to youth soccer development and education through the Philadelphia Union Academy and the YSC Academy, an independent college prep school focused on student-athletes. The school has an existing campus in Chester and another in Wayne.

“This best-in-class facility will provide a singular home for our professional and academy teams while creating a premier destination for local youth groups to fall in love with sports," Philadelphia Union Principal Owner Jay Sugarman said. "Alongside Subaru Park, WSFS Bank Sportsplex will become another centerpiece of our club and community strategy and I could not be more proud to see this project come to fruition."

The new complex will span 32 acres between Subaru Park and the Union Power Plant office building along Seaport Drive.

The indoor facilities will include a 125-by-75-yard turf field and courts that can be configured for different-sized fields. A 20,000-square-foot performance center will feature a weight room and sprint track, locker rooms and a cafe open to athletes and guests.

“The heart of this project is our commitment to community and our desire to be an agent for positive change," said Tim McDermott, Philadelphia Union President. "We are proud to do this alongside a like-minded organization in WSFS Bank and look forward to enriching the lives of young aspiring athletes in the Philadelphia area.”

As the project's naming rights sponsor, WSFS Bank will donate 365 hours of field and facility usage to community organizations. The complex also will be open for use by Chester youth and local organizations and will host health and wellness programming

The new facilities are expected to generate $90 million in economic benefits over their first decade of operation. The project fits into the much larger Chester Waterfront Master Plan, which calls for a revitalization of the city's waterfront with a range of new recreational, office and retail spaces.

“This project shows the continued commitment and partnership that the city shares with the Philadelphia Union,” said Chester Mayor Thaddeus Kirkland. “It will create better jobs, more recreational opportunities, and a bridge that connects our community to our beautiful waterfront.”

The Philadelphia Union Academy and YSC Academy are expected to move to the Chester campus beginning in 2023. YSC Academy will be housed in a state-of-the-art school inside the Union Power Plant, the planners said.

A groundbreaking for the project will take place this coming winter, with a goal to complete the outdoor fields by next August and the indoor facilities by June 2024.