A public reception will be held at the Noyes Arts Garage in Atlantic City on Monday, Oct. 17 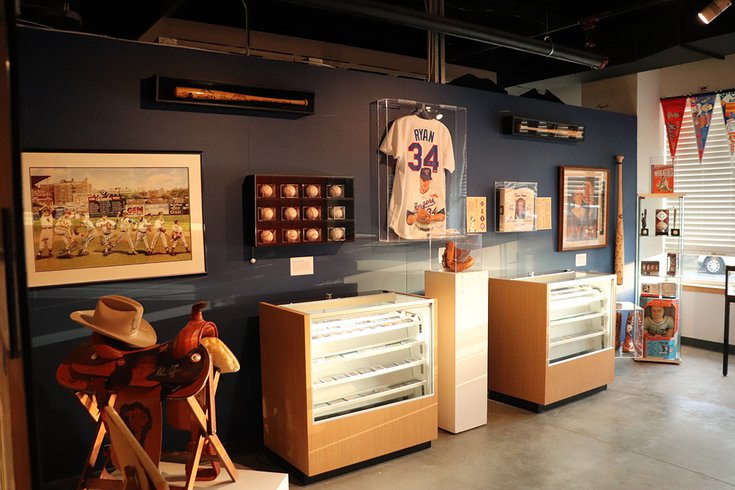 Stockton University is displaying pieces from its $1 million Nolan Ryan collection in pop-up exhibits through Dec. 11. The 15,000 item collection will be available to view at five sites, including Stockton's Richard E. Bjork Library in Galloway and it's campus in Atlantic City.

A Nolan Ryan memorabilia collection containing nearly 15,000 items that was donated to Stockton University this summer will now be on display at various locations for public viewing.

The school will be holding pop-up exhibitions through Dec. 11. at locations including Stockton's Richard E. Bjork Library in Galloway, Kramer Hall in Hammonton, Stockton University at Manahawkin and Stockton's campus and the Noyes Arts Garage in Atlantic City.

MORE: At Penn museum's art of smells exhibit, beauty is in the nose of the beholder

A public reception is being held at the Noyes Arts Garage, at 2200 Fairmount Ave., on Monday, Oct. 17 at 5:30 p.m. Leo S. Ullman, who donated the collection, will be in attendance.

The items were appraised as being worth more than $1 million in July. Ullman, a real estate investor who once owned the Shore Mall in Egg Harbor Township, has a connection with Stockton that runs back several years. He and his wife, Kay, provided funding for the creation of the Schimmel and Hoogenboom Righteous Remembrance Room at Stockton's Sara & Sam Schoffer Holocaust Resource Center.

According to Ullman, the collection started as a "fluke" after he purchased a few Ryan baseball cards while awaiting the birth of a grandson in Madison, Wisconsin. He wasn't allowed in the hospital, so he wandered to a card show at a motel next door.

Stockton announced plans to use the items for a course on collecting during the Spring 2023 semester and the news received a lot of public interest.

"We've had calls from all over the country about Stockton receiving the collection," Dan Nugent, vice president for University Advancement and executive director of the Stockton University Foundation, said. "Our faculty and students will be making use of the items in the spring, but we wanted to get some of them on display as soon as possible to give the public access."

Ryan's Hall of Fame baseball career spanned 27 years, from 1966 through 1993. He played for the New York Mets, California Angels, Houston Astros and Texas Rangers. He remains the MLB career leader in strikeouts (5,714) and no-hitters pitched (7). Ryan's jersey number has been retired by three of his former teams: the Angels, Rangers and Astros. He also was the first pitcher to throw a pitch faster than 100 mph and the first to earn a $1 million salary.

There was a renewed interest in Ryan over the summer thanks in part to a documentary titled "Facing Nolan," which was released in July.

Stockton's collection is believed to be the largest of its kind, featuring baseballs, bats, gloves, hats, jerseys and cards. One-of-a-kind pieces, like a signed cowboy hat, autographed horse saddle and Beanie Babies, are also part of the collection. 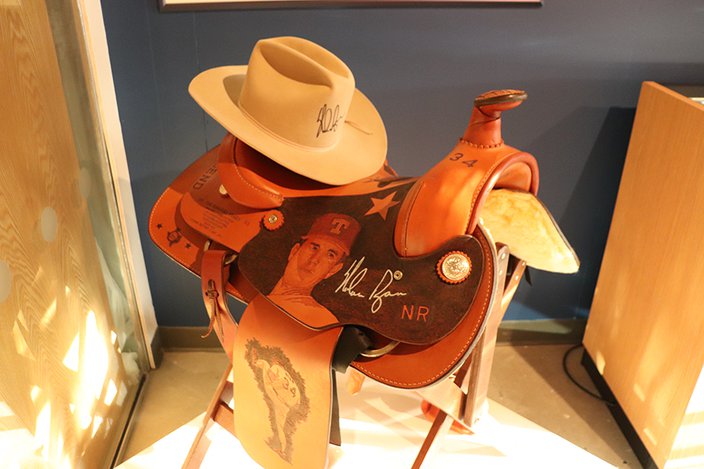 The five venues that house the pop-up exhibit differ in content, but work together to paint a fuller picture of Ryan's life and career.

"I tried to get a cross-section of memorabilia that the donor had collected that told the story of Nolan Ryan,” Michael Cagno, the executive director of the Noyes Museum of Art of Stockton, said. “It’s called a pop-up exhibit because it’s not long-term. But pop-ups are also tied to baseball, and the five sites are like the four bases of a baseball diamond and the pitching mound where Ryan dominated during his remarkable 27-year career.” 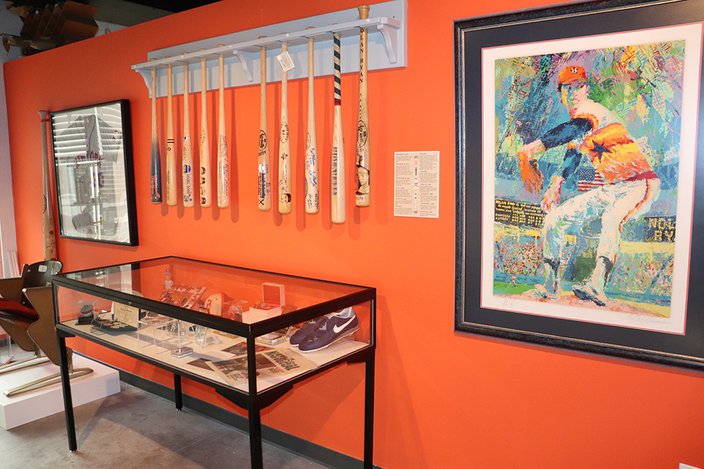 The Noyes Arts Garage houses the largest display. The walls of the room where the collection is held are painted orange and blue for the Houston Astros, the team that Ryan spent nine seasons with.