The items were given to the school by Leo S. Ullman and will be used for an upcoming course in spring 2023 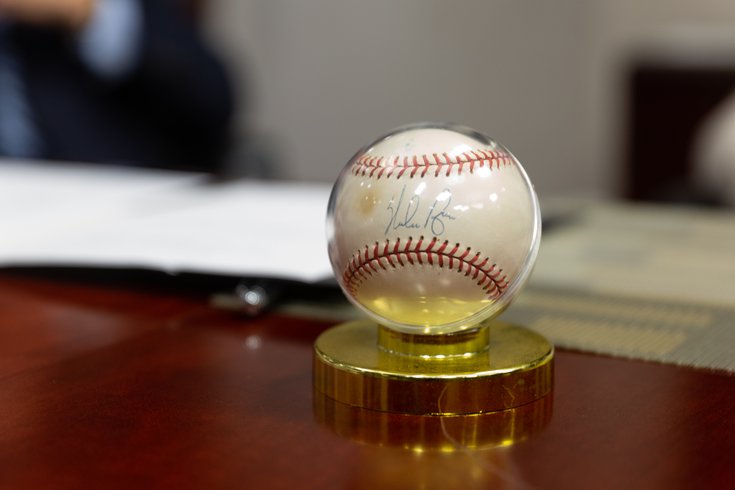 Leo S. Ullman has donated his Nolan Ryan memorabilia collection worth $1 million and containing nearly 15,000 items to Stockton University, where it will be used as the centerpiece for a class on collecting.

A valuable Nolan Ryan memorabilia collection containing nearly 15,000 items was donated to Stockton University, where it will be used as the centerpiece of a class on collecting.

The collection had belonged to 83-year-old Leo S. Ullman, a real estate investor who lives in Sands Point, New York, but who once owned the Shore Mall in Egg Harbor Township. Ullman amassed the collection over 27 years, and the items were recently appraised as being worth more than $1 million. It is thought to be the largest collection of its kind.

"As much as I admire Nolan Ryan, both as a person and for his career in baseball, without limit, the collection – and a book that will shortly be released on the collection – is focused not about Nolan Ryan per se, but rather, it's all about collecting a very significant part of all that's out there to honor this special iconic person," Ullman said in a press release.

Ryan's Hall of Fame career spanned 27 years, from 1966 through 1993, playing for the New York Mets, California Angels, Houston Astros and Texas Rangers. He remains the MLB career leader in strikeouts (5,714) and no-hitters pitched (7). Ryan's jersey number has been retired by three of his former teams: the Angels, Rangers and Astros. He also was the first pitcher to throw a pitch faster than 100 mph and the first to earn a $1 million salary.

The donation comes at a time of renewed interest in Ryan thanks in part to a new documentary titled "Facing Nolan," which will be available to stream on July 19.

The items in the collection range from the expected baseball memorabilia, such as cards (about 3,000 of which are signed), bats, balls, hats, gloves and clothing, as well as more eclectic items, like signed cowboy boots, high school yearbooks, Beanie Babies, ice cream sticks, and a full-sized leather saddle.

"This collection is probably the largest private collection in existence and covers all types of memorabilia, from the mundane and common to the unusual and rare," Leon Castner, an appraiser, said in a report. "This collection is not simply an accumulation of individual items. It is an archive of modern sports collectability."

Stockton, located in Galloway Township, New Jersey, is developing a class on collecting that will focus on this unique exhibit during the Spring 2023 semester. 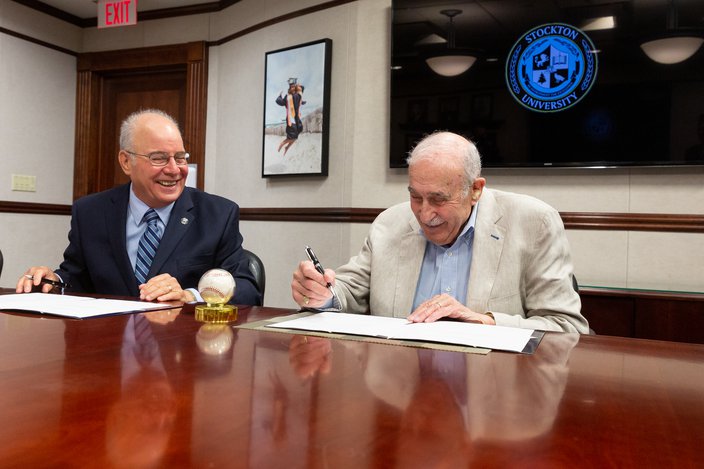 Stockton University President Harvey Kesselman, left, looks on as Leo S. Ullman signs the agreement to donate his collection of Nolan Ryan memorabilia, worth $1 million and containing nearly 15,000, items to Stockton University. There it will be used as the centerpiece of a class on collecting.

"Stockton is excited to become the new home for Leo's vast and unique collection of Nolan Ryan memorabilia," Leamor Kahanov, Stockton provost and vice president for academic affairs, said. "We believe the collection will be a great academic resource for courses like sports history or statistics."

Ullman's connection to Stockton runs back several years. He and his wife, Kay, provided funding for the creation of the Schimmel and Hoogenboom Righteous Remembrance Room at Stockton's Sara & Sam Schoffer Holocaust Resource Center. The room honors those who sheltered Ullman and his family during the Holocaust in Amsterdam, Netherlands.

According to Ullman, the vast collection actually began as "a complete fluke" while he was in Madison, Wisconsin, awaiting the birth of a grandson. Since he was not allowed inside the hospital, he wandered to a card show at a motel next door.

"I bought 12 Nolan Ryan cards for $1 each, thinking I had a collection, having no idea what I was getting into," Ullman said. "I had no goal. I knew I'd never capture the entire market. I just found the products interesting. There's also a measure of joy in finding something that you didn't know existed, or in acquiring an item that was impossible to find."