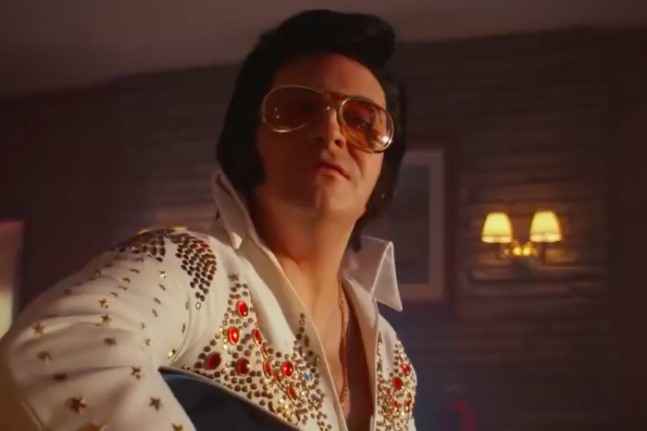 Advertisement for iPhone features a group of Elvis impersonators.

When the holiday season rolls around each year, there's nothing like an inspired dream team of large corporations to illustrate the gap between you and the life they imagine they're selling you.

You don't have to watch TV anymore to be bombarded by commercials. They come for you on YouTube in abridged versions — for instance, the animated Apple commercial with the freckly girl and her dog. If you see it on YouTube, the story actually stops before her grandma receives the page of a letter that blew out her window.

See, this helps us remember that commercials like this exist in a world side-by-side with people who interpret them from the gutter. Others love it.

My dad keeps getting teary every time that animated apple commercial comes on because he says it reminds him of me, because I want to be a writer.

Being cynical about advertising just for the sake of being cynical is kind of immature. There is a real intersection between art and commerce that deserves appreciation when it's executed properly, in a way that feels honest.

MORE ON THE HOLIDAYS: How to find your favorite Christmas movies if you missed them on TV

The year's highest advertising stakes always surround the holidays and the Super Bowl, and while the latter's ads are usually either enjoyable or preachy,  holiday ads have their own treacly mix of sentimentality and humor.

In the realm of reactions, this year's commercials didn't disappoint. Here's a look at some of the best responses from around Twitter to five ads in this year's batch.

What do you know? Apple spent a lot of money this year, and why not? We keep giving it to them. A new iPhone feature allows you to do group FaceTime chats, which sounds potentially pretty clumsy. You don't have to worry about that until you buy your new iPhone, though.

And so we have the Elvis commercial, which features multiple Elvis impersonators singing "There's Always Me."

This was well done, even if its extravagance wears on you a little more than others.

I always have to watch that Elvis Presley iPhone commercial whenever I’m on YouTube.

I don’t know why but I feel like crying while watching that.

It’s all these Elvis Presley impersonators and they all look sad and lonely.

I swear that @apple #Elvis group #FaceTime commercial is going to make me hurt someone. But then they'd be cryin' all the time.

Whenever the apple commercial with the Elvis impersonators comes on my tv I always have this feeling my grandma would be willing to dance with and maybe even date them.

Holiday stress isn't an issue to be dismissed, but a little bit of perspective goes a long way at this time of year. This frightening commercial from the International Committee of the Red Cross is a reminder that conflicts around the world tear families apart every day. Something as small as a donation can help reunite those who have been separated by the ravages of war, or help them find new homes and new beginnings.

Bravo @icrc for this powerful ad showcasing the excellent work you do to help reunite families: Santa struggles through a war zone in this powerful Red Cross film https://t.co/B1XHYZswaY #Christmas #TV Commercial #Charity

Contrast this to the Red Cross commercial from last year. Outside a home where a family eats their holiday dinner, a mother and her two children watch in agony as their own house burns down across the street. Maybe the Red Cross learned its lesson about heavy-handedness in 2018.

That Red Cross holidays/house on fire commercial is cringe worthy. I'm not sure it sends the desired message.

@hgtv @Sling the @RedCross commercial of a house burning down is a terrible way to raise money. Not the #Christmas I want my children to see on TV. Show me families helped by the RED➕!

Sadly, in the wake of this year's California wildfires, the message might have been more effective.

The Samsung-Apple rivalry is alive and well, even if smartphone fever has cooled off a bit. That's what happens when phones start topping $1,000 and carriers stop offering subsidies for them. Samsung had to answer Apple's Elvis commercial, and they did so pretty effectively for the Galaxy.

First of all, any variation of that Keane song ("Somewhere Only We Know") is going to capture your attention. It's the "Landslide" of the last generation, and if it's a female vocalist, forget about it. United Kingdom department store John Lewis & Partners also used a cover of the song by Lily Allen in a 2013 animated commercial featuring a bear and a hare. You might cry watching this — and then have a washing machine shipped across the Atlantic.

Samsung's 2018 commercial is backed by Reneé Dominique's slower, sadder rendition of the 2004 piano rock hit. They made the right call, for the most part, although some viewers were upset by it or too saddened to survive it.

Cause of death: The Samsung Galaxy commercial with the ARCTIC EXPLORER DAD WHO IS AWAY FROM HIS FAM RESEARCHING PENGUINS. 😭👏🏼😩🐧

Honestly hate that guy in the Samsung Galaxy commercial who is just sooooooo unhappy surrounded by penguins that he has to use his watch to light some dumbass twinkle lights for his kid or whatever. FUCK YOU, SIR. You’re living my dream and don’t even appreciate it.

@SamsungMobile really disappointed in your company’s lack of research on your commercial with the penguins...

Has anyone else binge-listened to the acoustic version of Keane’s Somewhere Only We Know in the Samsung commercial? Just me? Okay

That stupid Samsung commercial has led me to fall into a brief Keane wormhole and now I'm unnecessarily sad.

A Keane song that my husband put on the first mix tape (fine, playlist) he ever made me is currently being used in a Samsung commercial and it makes me want to rip the television off the wall how dare you

Slow, affected cover of Keane's Somewhere Only We Know in a Samsung commercial <<< pic.twitter.com/IdooCFhtDX

Speaking of John Lewis & Partners, they went with Sir Elton John this year. You can't dispute the man's greatness. He's not even dead yet and he's already got a "Bohemian Rhapsody"-style biopic coming out next year. This ad is mushy, no question. We're dragged back to the day Elton John got his first piano for Christmas. The thing is, it's a true story.

The problem? It may have been too effective as an ad for Elton John. It traveled to the United States and nobody  seems to know about John Lewis & Partners.

Everyone is talking about the Elton John commercial and nobody remembers the brand. Bad ad.

That Elton John commercial manages a trick even the Marvel movies haven’t figured out: how to use horrifyingly creepy de-aging effects but still make me cry

The Elton John commercial is following me around calling me dad pic.twitter.com/7g3CpO8PuS

Hobbies include: watching the Elton John commercial 6 times a day and crying each time

Am I the only one who loves this Elton John commercial but has no idea what exactly @jlandpartners is selling with it? Are they a gift-wrapping company? https://t.co/SMfVqaMggz

I'm confused... is this a commercial for pianos?

Amazon turned a terrifying premise into a pretty fun commercial, although we'll probably never look at packages the same after this. Using The Jackson Five's "Can You Feel It" was a catchy choice, if not a very unifying one, ironically.

The Amazon ad using the Jackson 5's 'Can You Feel it' is the most cognitively dissonant Xmas marketing I can recall.

Amazon is now using "Can You Feel It?" by the Jackson 5 for an ad and nothing is sacred.

Granted, for all the top-level production, the execution here isn't as natural as this viral video of eggs in a frying pan rapping as Busta Rhymes.

This is a solid commercial, but it's just that. It's just very easy to get sick of it. And it's far from the truth of dealing with boxes when you're returning them, or picking them up from an understaffed facility with 70 other people ahead of you in line. There's no need to ask whether you can feel "it" — in this case, a primal scream rising up from your gut.

if i have to hear those dumbass amazon boxes singing about how the whole world’s coming together now im gonna lose it. can you FEEL MY RAGE BUILDING BC I SEE THE ADS LIKE 8 TIMES A DAY?? ‘CAN YOU FEEL IT’, AMAZON?!!!

Just seen the @amazon Christmas ad, using “can you feel it?” by The Jackson 5. Very apt when you’re elbow deep in rubbish trying to find your parcel “left in bin” pic.twitter.com/hiypfhddap

The Amazon "Can You Feel It" ad sends me back to a wretched aerobics class taught by a woman named Becky who used to walk around and yell "FEEL IT" in my ear. Not a fan.

The way the Amazon ads keep getting progressively louder, I feel like "Can You Feel it" is going to be a death metal song bu December 22nd.

Each time I see that Amazon ad with the boxes singing "Can you feel it", I imagine Evil Elmo is setting them on fire. pic.twitter.com/cB4uaSTE4s

Guys I just saw the new amazon ad and all the boxes sang “can you feel it” and none of the workers in the factory were having to piss in bottles so maybe everything is great & we should hear less “late capitalism” and more “GREAT capitalism”.

The Amazon ad where the parcels are singing Can You Feel It? pic.twitter.com/9Zb4YC7fyb

There are plenty of other commercials out there this year. Love them or hate them, there's only one way to escape them: unplug for a bit and spend some time with the people you love.