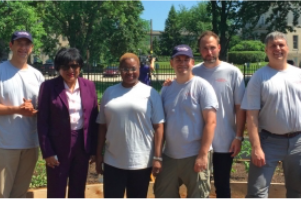 With a national lens hovering above Philadelphia for last week's Democratic National Convention, the opening of a brand community garden for The Children's Hospital of Philadelphia flew a bit under the radar.

In a partnership with RealClearPolitics, America's Credit Unions and Credit Unions for Kids, CHOP cut the ribbon late last week on a Health and Wellness Garden at the Nicholas and Athena Karabots Pediatric Care Center, located at 4865 Market Street.

Described as a "leave-behind" project to honor Philadelphia's 2016 DNC, the garden was constructed with the assistance of hundreds of volunteers over the past several months. It will serve as a resource for patient and community engagement programs that provide hands-on education in gardening and healthy nutrition.

“I am thrilled to cut the ribbon on the Health and Wellness Garden at our Nicholas and Athena Karabots Pediatric Care Center,” said Madeline Bell, president and CEO at CHOP. "We are so fortunate to be able to share it with our community and promote good nutrition for years to come.”

The Health and Wellness Garden contains about 1,200 feet of raised plant beds including squash, kale, cucumbers, sweet peppers, eggplant, sweet potatoes, purple sweet potatoes and a variety of lettuces and tomatoes. Herbs include rosemary, oregano, lavender and basil. Another fruit tree orchid planted in the garden will also produce apples and other fruits.

A significant portion of the produce generated by the garden will be donated to the Early Head Start program, which serves Philadelphia families living beneath the poverty line with children under the age of three in certain parts of the city.

“Credit unions have been proudly conducting leave-behind projects in honor of the National Party Conventions since 2000 to leave a lasting impression on the communities like Philadelphia that have opened their doors to national nominating conventions,” said Rich Meade, Chief of Staff and COO of the Credit Union National Association. “This meaningful work, bringing a health and wellness garden to a community in need, will continue to serve its purpose and impact the lives of children and their families for years to come.”