How did Chris Christie weather the storm of the #GOPDebate? 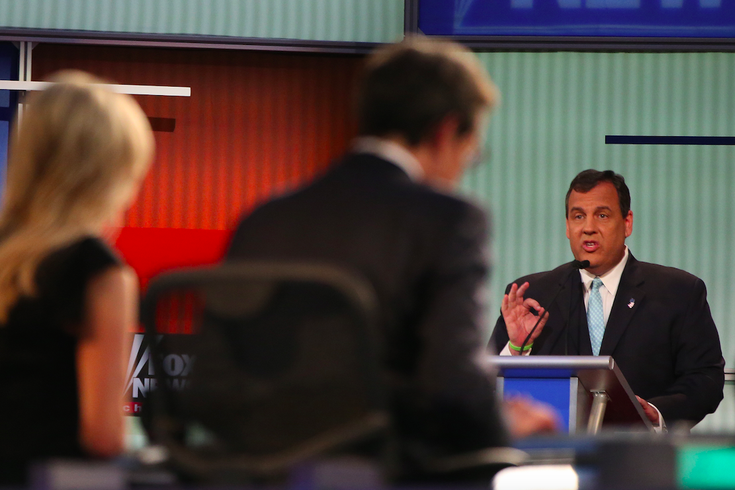 In the latest Rutgers-Eagleton poll, Christie's favorability rating plummetted to a scant 30 percent of New Jersey's registered voters. That dissatisfaction crossed party lines and extended into the governor's performance on issues ranging from taxes and education to crime and the economy.

Could a trip to Cleveland and a national stage give the governor a lift? Pitted against 9 other GOP hopefuls in Thursday night's debate, did Christie make an advance from the periphery of a field hoping to contain polarizing frontrunner Donald Trump? Did he become more a "darling of conservatives" and overcome moderator Chris Baeir's opening salvo?

Early in the debate, Christie was challenged on his economic record in New Jersey, from the state's high foreclosure rate to its pension crisis. Christie jumped to defend himself by citing the state's spending spree prior to his taking office in 2010.

Chris Christie defends New Jersey's current economic woes: "If you think it's bad now you should have seen it when I got there." #GOPDebate

Later, in a debate highlight, Christie engaged in a heated shouting match with Rand Paul over surveillance and data collection, sniping at the Kentucky senator for "fundamentally misunderstanding the Bill of Rights."

Rand Paul and Chris Christie got into an angry exchange over national security http://t.co/CXo7kNQkxC pic.twitter.com/Bm15K0ThPd

Paul shot back at Christie over his embrace of Barack Obama.

On the question of entitlement reform, Christie declared Social Security "broken" and "stolen from." "We have been lied to," Christie said of the system, calling for an increase in the retirement age to prevent bankruptcy and tax increases. Twitter's jury was a little more split on this one.

Means testing and raising the retirement age on social security. The third rail has been touched by Chris Christie.

@ChrisChristie = raise retirement age. be a nice guy and give up the social security that you paid your whole life for. #VotersFirst

On defense spending, Christie argued that higher troop and fleet limits should be set for the various branches of the U.S. military in order to send a message of strength to the world. Those comments sparked discussion on the reinstatement of a draft.

Chris Christie says we need to strengthen our military, because spending more on it than the next 16 countries combined is weak.

How does @ChrisChristie hit those numbers without a military draft?

Chris Christie: the first thing we need to do to strengthen America is to strengthen our military. Reagan would have agreed! #GOPDebate

We need to spend more on the military Chris Christie? Ummmm... pic.twitter.com/pyAoEDyNJE

In his closing remarks, Christie summarized his mission as follows: "The United States needs to stop worrying about being loved and start worry about being respected, and that's how I'll lead the country."

But of all things, apart from an endless stream of references to his appearance...

@MichaelBerrySho I was kind of hoping Chris Christie was going to wear his baseball pants tonight. #FUPA #GOPDebate

If you don't vote for Chris Christie, he'll make you late for work! The dude's a gem. That's what I would do as a politician. #GOPDebate

Even Philadelphia's probable next mayor, Jim Kenney,  got in on the action for the tweet of the night.

Hey @ChrisChristie -- if you want to check out the Constitution, it's right here in Philly. I'll keep the bridge open for ya. #GOPDebate