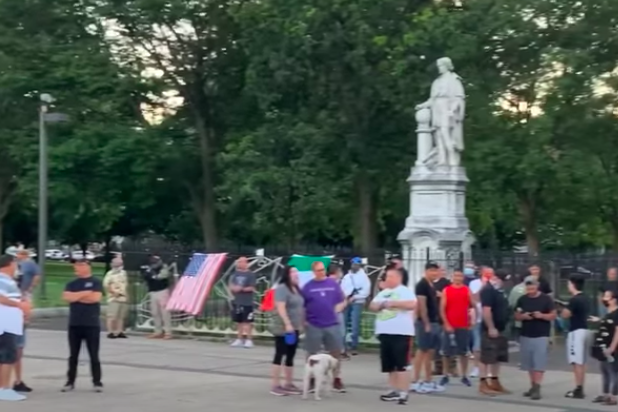 Roughly 100 residents of South Philly—many armed with weapons—gathered to protect the Christopher Columbus Statue in Marconi Plaza off South Broad Street on Saturday.

Philadelphia Mayor Jim Kenney called the group of people who surrounded the Christopher Columbus statue in South Philly on Saturday “inappropriate” and said that “these individuals only bring more danger to themselves and the city.”

“We are aware of the groups of armed individuals ‘protecting’ the Columbus statue in Marconi Plaza. All vigilantism is inappropriate, and these individuals only bring more danger to themselves and the city,” Kenney wrote on Twitter.

“We are also aware of an apparent assault caught on video tape, as well as possible restrictions placed on journalists filming the event. These incidents are under investigation at this time.”

Philadelphia District Attorney Larry Krasner took to Twitter as well to condemn the group that gathered around the Columbus statue.

Saying you are "defending" something doesn't prove you really are.

And using a bat--or anything else--for an illegal purpose (such as assaulting or threatening or harassing people) is a criminal act.

Prosecutors and police will uphold the law in Philly, consistent with their oaths, against criminal bullies.

So save your bats for a ball game. And save your hatchets for chopping wood. We remain the City of Brotherly Love and Sisterly Affection.

A group of approximately 100 South Philly residents converged on Marconi Plaza on Saturday to protect the Christopher Columbus statue from being removed. Some of those guarding the statue on South Broad Street were wielding guns, baseball bats, golf clubs, and sticks.

Outside the Christopher Columbus statue in South Philly.. Homeboy in white behind me strapped w machine gun pic.twitter.com/wDEGuLD5O5


Crowd "protecting" Columbus statue at Marconi Plaza gets extremely tense when a GrubHub driver comes to take a mocking photo with them and calls Columbus a rapist. They're chanting Trump 2020 pic.twitter.com/b6rGCGvFvs


A picture shows the Columbus statue in South Philadelphia being guarded by residents, tonight. #Philly pic.twitter.com/Pz0J2wrONi


One South Philadelphia resident was armed with a gun.

He was standing by a Christopher Columbus statue aiming to protect the statue from being vandalized. #Philly pic.twitter.com/ZvUQ8aiWbo


guarding the christopher columbus statue at marconi plaza at broad and oregon pic.twitter.com/sAXvbLMfNi


This man by the Columbus statue at Marconi Plaza is armed with some kind of rifle pic.twitter.com/S4NlqC1uTU

More agitated white men with bats and sticks are continuing to arrive at Marconi Plaza outside the Columbus statue. Philly Police faced some backlash recently after they appeared to tolerate and endorse similar activity in Fishtown on the north end of the city recently. pic.twitter.com/MSVmk7yL6Z

Some of those who gathered allegedly assaulted a reporter named Chris Schiano from the media company Unicorn Riot after they were seen being filmed, as footage shows the reporter being hit in the head and having the tires of his bike slashed.

Some of those who gathered allegedly fought with police officers over the reporter covering the event and argued with the cops to get Schiano to stop filming the gathering.

South Philly Columbus statue enthusiasts got very upset once again when police told them they aren’t allowed to physically stop us from filming them pic.twitter.com/nKtkAnCmwc

Retired NFL defensive end and former Eagle Chris Long, who helped lead the Birds to their first Super Bowl title, didn’t appear to appreciate that one of the men seen verbally and physically assaulting the reporter was wearing a shirt depicting Long in the underdog masks from the championship run.

Get a new shirt https://t.co/pNGCq88KBg

A Philadelphia police officer named Louis Campione also allegedly attempted to stop the reporter from filming and covering the event, as well as accused the reporter of instigating the crowd.


We are aware of this apparent assault, as well as restrictions placed on journalists documenting the event. These incidents are both under investigation at this time.

A smaller group returned to guard the statue on Sunday, with police officers monitoring the situation for a second-straight day.

Small group back today at the Christopher Columbus statue at Marconi plaza. Some South Philly residents said they’re protecting it, one has a baseball bat, and a few are arguing with counter protestors. If you look to the lower left you’ll see a box of tomato pie for sustenance. pic.twitter.com/MFOzg9wJo9


Number of police officers on scene too. pic.twitter.com/HWpN6CTlDm

However, many supporters of the Columbus statues believe that they are a historic representation and symbol of the Italian heritage—rather than that of racism.

One of the cities that has taken down a Columbus statue has been Camden, which removed the effigy on Thursday.