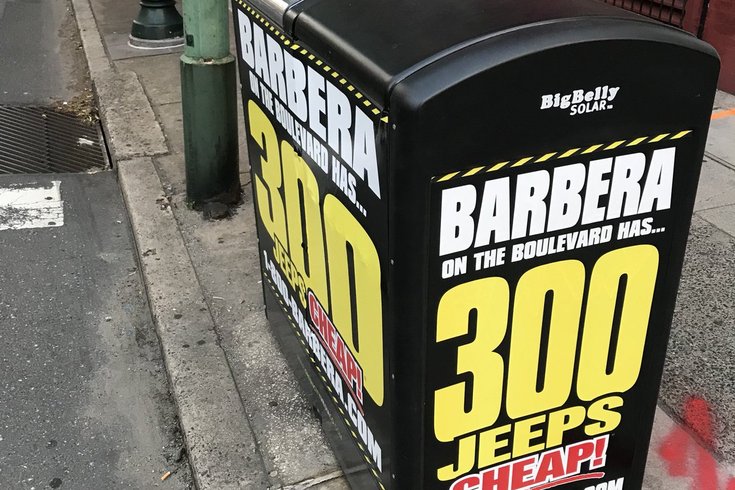 An advertisement from Barbera's Autoland on 13th and Market streets.

Reports of people taking offense to the new advertisements plastered onto Bigbelly trash cans punctuating nearly every block in Center City have officially started to circulate.

Have you seen them? Bet you have. They're all down Market Street, inside the City Hall breezeway, even scattered through some of our residential neighborhoods.

And they've got "cheap" written all over them. No, literally.

The ads belong to Philly car dealer Barbera's Autoland — yeah, that's the car dealer with those commercials you will never get out of your head — and philly.com reported the ads are valued at $1.25 million in a 10-year contract with Bigbelly. The city will receive 5 percent of the revenue.

So far, the city has sold advertising space on 200 of its cans around the city, and by the end of July that number will reach 375, according to the same philly.com article.

And while we're on the subject of the city's trash management, City Controller Alan Butkovitz issued a review of the Street Department's management of Bigbelly units, worried there was no valid cost effectiveness or way for the department to utilize the technology effectively.

Basically, he said it wasn't worth it to buy more.

“The city purchased expensive technology in an effort to operate more efficiently and effectively,” Butkovitz said in a statement on an initial review of Bigbelly to Waste 360. “Our report indicates the city wasted that opportunity over the last eight years by not utilizing the technology or properly monitoring the expensive trash cans.”

In 2017, the city purchased 275 more Bigbelly units at no additional cost to taxpayers.

Anyway — there have been many critics of the advertisements that have been more outspoken than I, so I'll let them speak to the issue:

Question @PhiladelphiaGov & @PhilaStreets - Did you actually sell the space on city trash cans or are these up illegally? Every trash can for several blocks along Market has them. It looks terrible. pic.twitter.com/0kKnBOvUg5

Ghastly new eyesore in my neighborhood at 11 & Spruce thanks to @BigBelly and @GaryBarbera_ Please help us @PhiladelphiaGov @Philly311 @PHLCouncil pic.twitter.com/fWEFdA1Pqk

WHO THE F*&K Approved This?! Center City has been turned into one big ad for Garry Barbara Autoland, and I'm heartbroken for Philly today: https://t.co/lhjqsGFvZu pic.twitter.com/14QWby7Nqc

YUP. These are all over the historic area too. The one at the corner of 6th and Race was overflowing yesterday on Flag Day, What an embarrassment.

I don't advocate vandalism... but i hear they peel off pretty easily.

You hear that? Your ads are an eyesore. Taking my jeep's recall, maintenance and any future purchase elsewhere @BarberaAutoland
Do better.

And if you dig a bit deeper you’ll find that the city bought more of these @BigBellySolar waste bins despite City Controller @AlanButkovitz finding no valid cost savings from the $6.5 million spent on the first round of them. #wasteful https://t.co/tzNgOBHm8b