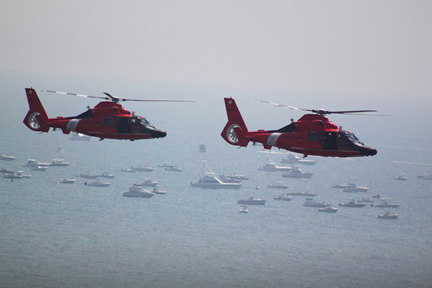 The U.S. Coast Guard and several local agencies have suspended their search for a jet skier who went missing Saturday night in the Delaware River.

Officials were alerted that 26-year-old Jesus Diaz Melendez had run aground near the Trenton boat ramp around 7:07 p.m. Saturday after the crew of the vessel A.J. Meerwald came upon a second jet skier who went down with Melendez. The vessel then contacted Coast Guard Sector Delaware Bay to initiate a search.

Watchstanders launched a Station Philadelphia 29-foot response boat crew and an Air Station Atlantic City MH-65 Dolphin helicopter crew to assist in the search. The second jet skier was picked up by the rescue boat and confirmed that his friend was ejected from the jet ski.

"The Coast Guard and other agencies saturated the search area, but unfortunately was unable to locate the missing man," said Chief Warrant Officer Jacob Gerasimof, the command duty officer during the case. "It is always a difficult decision to suspend a search for a confirmed person in the water. Our heartfelt thoughts and prayers go out to the loved ones affected by this terrible tragedy."